First EQ vehicle to be built at Bremen 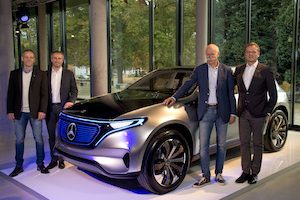 Germany – Mercedes-Benz says the first production model of the new EQ product brand will be produced in Bremen by the end of this decade. The production model will be based on the EQ show car – an electric vehicle in the look of a sporty SUV Coupé, which was presented at the Mondial de l’Automobile this year.

Bremen currently builds ten different models and is the lead plant for the C-Class, directing the worldwide production of the highest-volume model series in the plants at Tuscaloosa/USA, Beijing/China and East London/South Africa.