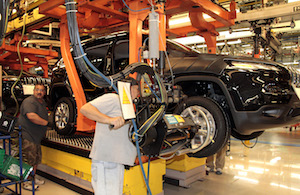 US – The assembly site in Ohio is the first plant in the country to achieve the World Class Manufacturing accolade, and the third facility in North America. Toledo received Bronze in July 2012.

Silver status was awarded after a two-day audit, during which Toledo earned a minimum of 60 points in ten technical and ten managerial ‘pillars’ (categories). The assessment was carried out by the head of WCM and Projects vice-president and the director of Powertrain Manufacturing, both from the Europe, Middle East and Africa region. FCA’s Windsor Assembly Plant in Ontario, Canada, and the Dundee Engine Plant, Michigan, gained Silver in March 2014 and May 2015 respectively.

Brian Harlow, vice-president – Manufacturing, FCA North America, commented that the achievement of the Toledo team “solidifies their position as an integral part of the company’s industrial footprint”. The 3.6m sq.ft plant is a production centre for the Jeep brand, which is currently celebrating its 75th anniversary. More than 5,100 employees on two shifts assemble the Jeep Wrangler, Jeep Wrangler Unlimited and Jeep Cherokee.

The WCM methodology, designed to systematically reduce waste, increase productivity and improve both quality and safety, was implemented by Fiat in 2006. It was introduced to the Chrysler Group as part of the merger between the two companies in June 2009.