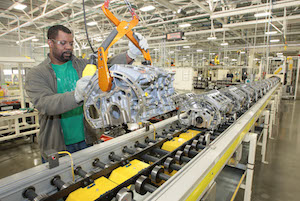 US – The vehicle-maker will retool North Plant at Trenton Engine Complex, Michigan, to produce next-generation, four-cylinder engines from the third quarter of 2017. Assembly will take place on the flexible production line which was installed in 2012.

“This investment in our flexible production line at Trenton North will allow us to quickly ramp up North American production of this new fuel-efficient engine,” said Brian Harlow, vice-president – Manufacturing, Fiat Chrysler Automobiles (FCA) North America. The engine was designed at Auburn Hills, Michigan, but the company has yet to reveal details of its application.

Production of the new engine will replace that of the 3.6-litre Pentastar V-6 on the flexible line at Trenton North. Pentastar production will continue at Trenton South, Mack Avenue Engine, Michigan, and Saltillo South, Mexico. The Trenton Engine Complex employs more than 1,500 individuals, and the new investment will retain 245 jobs. FCA says that since 2009, it has invested more than $2 billion in Michigan and added nearly 15,600 jobs, bringing its total employment in the state to 35,314 individuals, including 21,621 hourly workers.

Trenton North began production in 1952 but was idled in May 2011, after turning out more than 38m engines. It reopened later that year. Trenton South opened in 2008 and started making 3.6-litre Pentastar V-6 engines in 2009, the year it received gold Leadership in Energy and Environmental Design certification in the green building system designation – the only engine production facility worldwide to do so at the time. The overall complex was awarded Bronze World Class Manufacturing status in April 2014.