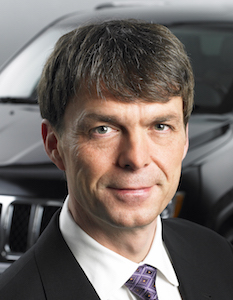 Zheng has served Fiat Chrysler Automobiles (FCA) for more than eight years, most recently as managing director of the sales joint venture with Guangzhou Automotive Group (GAC) in China. She previously held several senior positions in sales and marketing at FCA in China.

Alcala steps into his new role from his most recent position as head of China Developments for the manufacturing and sales joint ventures in China with GAC. Alcala has worked for FCA for 29 years, holding operational leadership roles in Europe, Latin America and the US.

Both Zheng and Alcala will join the Group Executive Council of FCA, the highest management body in the company. Mike Manley, who until now has led FCA in Asia Pacific, will retain his membership of the GEC as well as continuing as head of Jeep and Ram worldwide.

Mele was most recently head of FCA Group Controlling and previously held the position of chief financial officer, Latin America. In his new role, he will report to Stefan Ketter, COO of Latin America and FCA’s chief manufacturing officer.