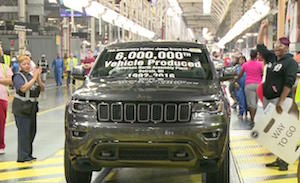 US – The milestone unit at the Detroit, Michigan, assembly plant was a 75th edition 2016 Jeep Grand Cherokee, powered by a 3.6-litre Pentastar V-6 engine. The vehicle was due for delivery to a local customer.

“Reaching this milestone is a reflection of this plant’s commitment to supporting the continued growth of the Jeep brand around the world and playing a role in the comeback of Detroit,” said Curt Towne, Jefferson North plant manager. He added that, “Detroit will always be the Motor City.”

The 3m sq.ft factory has a 4,500 workforce operating on an alternative schedule; three crews working two ten-hour shifts per day, six days a week. Each Jeep takes a day and a half to complete the journey from bodyshop to final assembly. Last year, the plant produced 365,542 vehicles and almost 25% of its output is exported to 135 markets worldwide.

Jefferson North was established in 1992 and is one of three FCA US factories in Detroit; the others are the Conner Avenue Assembly Plant, which makes the Dodge Viper, and the Mack Avenue Engine Complex. The $1.2 billon which Chrysler invested in the first Grand Cherokee included the construction and equipment of Jefferson North. From 2005 to 2010, the plant also made the Jeep Commander, then began production of the Dodge Durango in December 2010. The plant turned out its five millionth vehicle, a Jeep Grand Cherokee, in August 2013.