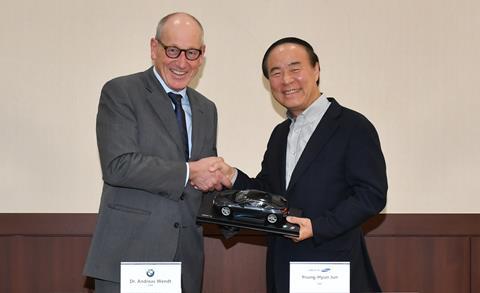 Dr. Andreas Wendt from BMW Purchasing and Supplier Network and Young-Hyun Jun, CEO of Samsung SDI at the signing ceremony in Cheonan, Korea

BMW Group has extended its existing business relationships with battery cell manufacturers CATL and Samsung SDI to ensure a stable supply of batteries for its growing electric vehicle (EV) programme.

BMW says the original CATL order volume of €4 billion, announced in mid-2018, will now be increased to €7.3 billion, divided across the BMW Group (€4.5 billion) and the Chinese BBA production site in Shenyang (€2.8 billion). The BMW Group is the first customer of the CATL battery cell plant currently under construction in Erfurt, Germany. A long-term supply contract for €2.9 billion has also been signed with its second battery cell supplier, Samsung SDI. The contract, extends from 2021 to 2031.

Working to ensure full transparency in its raw material supply chain, BMW says it will source the cobalt and lithium needed for cell production directly from mines in Australia and Morocco and make it available to CATL and Samsung SDI. The OEM also notes that its fifth-generation electric drive trains from 2021 on will also be produced entirely without using rare earths.

In-house battery production takes place at BMW Group Plants Dingolfing (Germany) and Spartanburg (USA), and at the BBA plant in Shenyang (China). The car maker has also localised battery production in Thailand and is working with the Dräxlmaier Group in this area. In November, the company opened its Battery Cell Competence Centre in Munich with the aim to advance battery cell technology and introduce it into production processes.

BMW has also formed a joint technology consortium with Swedish battery manufacturer Northvolt and Umicore, a Belgian developer of battery materials. The cooperation will focus on creating a complete, sustainable value chain for battery cells in Europe, extending from development and production all the way to recycling.