The latest solutions for steel include metal-cored welding wires, zinc-magnesium-aluminium alloys and a nanoceramic method

The automotive industry has found steel such a useful material that it seems almost churlish to mention its habit of bonding with oxygen and reducing itself to a pile of rust in a relatively short period of time. But the pursuit of corrosion-proofing has led to some imaginative solutions and, in the face of challenges from engineering plastics and aluminium, the development of improved coatings has seen levels of protection reach new heights.

Galvanisation continues to be a popular method for the coating of steel and has proven to be effective, but it also presents challenges, especially with weight; hot-dip galvanising deposits a layer that may be thicker than is strictly required. However, electro-galvanisation achieved via electroplating applies a thinner – and consequently lighter – covering. Meanwhile, galvannealing subjects the molten zinc coating to in-line heat treatment immediately after the hot-dip bath, accepts paint very readily and produces a harder coating than galvanisation on its own.

Galvanising presents two particular issues that have to be tackled. The first is to do with welding. Automotive manufacturers typically use galvanised steel in the 1.6-4mm range for components such as frames, engine cradles and suspension links, and thinner measurements for other areas of the vehicle – down to 0.7mm on body skins. Thinness increases the potential for burn-through and the zinc oxide coating can contribute to defects when welded incorrectly. 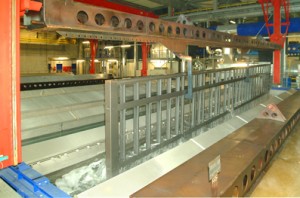 The second problem with zinc coating is more obstinate: the added weight. One approach to this has involved the shift to using high-strength steels (HSS). Yet that creates a problem as well, as the process of hot-dip coating has been found to lead to hydrogen embrittlement.
Henkel’s nanoceramic solution

German company Henkel has launched a pre-treatment technology named TecTalis. This is intended to replace zinc-phosphate and offers a significantly reduced process cost and environmental footprint. Furthermore, it is claimed to cut labour costs in handling, analytics and maintenance, plus other expenses such as energy, disposal and water consumption. TecTalis is phosphate-free and generates no volatile organic compounds (VOCs) or equivalent emissions, and operates at room temperature. Henkel says it improves profitability by increasing throughput and cycle times.

In the normal zinc-phosphating process, the steel is cleaned, rinsed, conditioned/activated, phosphated, rinsed, post-rinsed and deionising rinsed. TecTalis dispenses with the conditioning/activation, post-rinse and phosphating steps. As the latter is eliminated, so is the need for heat, which saves around 30% of the energy and 20% of the water used in conventional phosphating. The line length is also cut by around 30%. Henkel describes it as the world’s first nanoceramic conversion coating process for metals.

Tata tackles today’s needs
It is perhaps paradoxical that Tata, the owner of Jaguar Land Rover, which is so strongly associated with aluminium, should have invested heavily in upgrading its world-class coil galvanising line at the Tata Steel Zodiac plant in Llanwern, South Wales. The £3.5m capital commitment has increased the size of the radiant tube section of the line’s annealing furnace, where the steel is provided with the mechanical properties it needs before proceeding to zinc coating. Capacity has been raised to 500,000 tonnes, an increase of about 25%. A second roll size has been added to the temper mill, which has allowed the plant to move into high-formability steels, while retaining the line’s ability to produce high-strength and dual-phase steels.

Tata Steel is a leader in advanced coatings for steel and all the complexities these involve. Conventional coatings start with zinc, which is covered with phosphate and an electro-coat to provide corrosion resistance and adhesion. Then comes the paint: a primer, covered by a base coat and finished with a clear top coat. Since the paint process is usually the longest stage in automotive production and can be a real bottleneck, when self-coloured or pre-painted steels began to appear in the construction industry there were some who began to wonder if the technology could be used in cars. The answer was “No”. [sam_ad id=17 codes='true']

“Joining pre-painted steels is tricky; the act of welding affects the surface,” says Kenneth Olsson, an automotive business development specialist at Swedish steel-maker SSAB. “That material has to be hidden; it cannot be used in visible areas.”

It’s not only in final assembly that coatings can be problematic. Boron steels have to be protected from oxidation during hot forming. Conventional coatings such as zinc do not seem to survive press-hardening very well, although HSS fares better. However, alloy coatings of manganese silicone oxide seem to reduce the forming problem.

In 2013, Kia Motors Slovakia (KMS) changed its metal pre-treatment from a conventional zinc-phosphating process to Chemetall’s GardoFlex technology. The new process combines the well-known characteristics of zinc-phosphating but is more flexible. The technology, which can be used for all conventional metals in the automotive industry, consists of a large number of high-performance modules. These are selected as a function of the local market conditions, regulations, plant technology and the substrate throughput. In the case of the car bodies and components produced at KMS, it is galvannealed and hot-dip galvanised steel.

The technology has enabled significant improvements in economic and commercial performance. Energy costs have been cut by a reduction in the temperature of the zinc-phosphate bath and the life of the bath in the activation stage has been prolonged from three weeks to six months, saving on water and maintenance. Instead of powder, KMS has opted for a liquid module; automated dosing helps to simplify the operation. Ultimately, GardoFlex produces a finer crystal formation and a more uniform surface layer.

Tata’s assertions are supported by a report into zinc-magnesium automotive coatings from the French Corrosion Institute, which was published in April 2008. This collated evidence from various research groups which showed that the alloying of zinc coatings with magnesium and eventually aluminium significantly improves corrosion resistance, delaying the appearance of red rust and the generation of paint delamination, compared with conventional zinc coatings.

The two methods for line production of zinc-magnesium coatings are hot dipping and physical vapour deposition, which involves the application of magnesium in a thin layer on the surface of electro-galvanised or hot-dip galvanised steel sheets by PVD in vacuum. Zinc-magnesium alloys are thereafter manufactured by heat treatment. The Institute’s report confirmed that such coatings can be thinner than traditional zinc or provide much higher levels of protection at comparable thicknesses – or, as Tata has shown, some of both. Research and test results have led to the conclusion that the need for additional protection, such as waxes and pre-painting, could be eliminated completely.

It has also been determined that lower alloys outperform higher alloys of zinc-magnesium-aluminium materials under certain exposure conditions, a behaviour that was detected primarily in cyclic tests. The addition of aluminium and magnesium reduced the corrosion-induced weight loss of zinc-based materials to a significant extent. In static exposure conditions at 10-40°C with 65-95% humidity and surface chloride contamination ranging from 500-5000mg/m, the weight loss of the zinc-magnesium-aluminium coating with 1.5% of magnesium and aluminium each was 53–82% lower than that of traditional hot-dip galvanised steel. The appearance of red rust in open conditions was also delayed by up to 10 weeks. Penetration decreased by as much as 66%, with a matching reduction in the size of the affected area.