Cooling the cost of welding 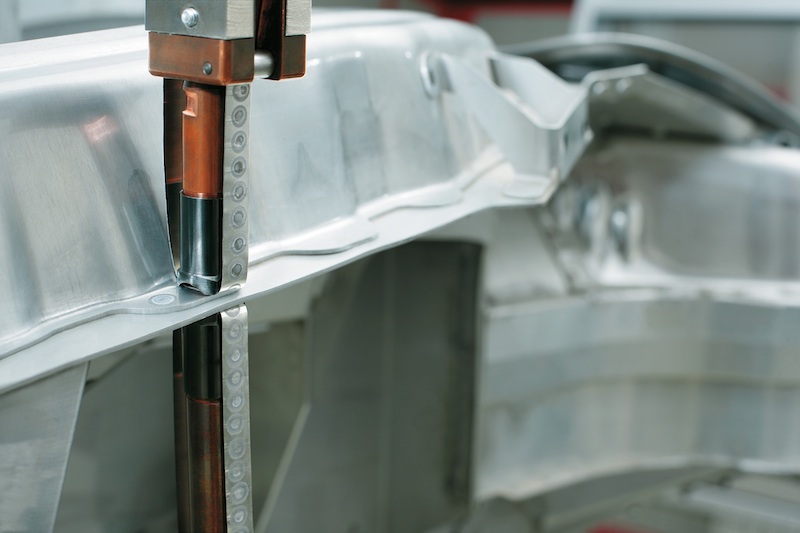 With up to 5,000 spot welds in a typical mid-sized car, OEMs are investing in the latest energy-efficient welding technologies to cut costs. The importance of reducing energy consumption has seen this topic come under increasing scrutiny at academic institutions worldwide, with engineers at Ohio State University, US, among those claiming a breakthrough.

The researchers have developed a new welding technique which is said to consume 80% less energy than a common method, yet creates bonds that are 50% stronger. It could have a significant impact on the automotive industry, which is trending on cars that combine traditional steel parts with lighter, alternative metals to reduce vehicle weight. However, despite recent advances in materials design, alternative metals still pose a practical challenge to OEMs.

“Many are considered impossible to weld by traditional means, in part because high heat and re-solidification cause them to weaken,” says Glenn Daehn, professor of materials science and engineering at Ohio State University, who helped to develop the new technique. “Materials have become stronger, but welds have not. We can design metals with intricate microstructures, but the microstructure is destroyed when we weld. With our method, materials are shaped and bonded together at the same time, and they actually get stronger.”

In resistance spot welding, manufacturers pass a high electrical current through pieces of metal, so that its natural electrical resistance generates heat which partially forms a melt pool and creates a weld. However, the high currents consume a lot of energy, and the melted portions of metal are never as strong afterwards as they were before. In recent years, Daehn and his team have been trying to find ways around these problems, amassing more than half a dozen patents on a system called vaporised foil actuator (VFA) welding.

Vaporised foil actuator welding In VFA welding, a high-voltage capacitor bank creates a very short electrical pulse inside a thin piece of aluminium foil. Within a few millionths of a second, the foil vaporises, and a burst of hot gas pushes two pieces of metal together at speeds approaching thousands of miles per hour. The metal pieces do not melt, so there is no seam of weakened metal between them. Instead, the impact directly bonds the atoms of one metal to atoms of the other. Critically, energy use is reduced because the electrical pulse is short, and the energy required to vaporise the foil is less than what would be needed to melt the metal parts.

So far, the team has created strong bonds between commercial steel and aluminium alloys, and has joined high-strength steel and aluminium with weld regions that are said to be stronger than the base metals. The technique can also be used to shape metal parts at the same time it welds them together. Daehn and his team now want to join with manufacturers to further develop the technology.

DeltaSpot welding systemSpot welding is still a major focus for developers of energy-saving technologies. However, conventional spot welding, especially of aluminium components, is characterised by high electrical consumption and electrode wear. The result is frequent stops while the electrodes are changed, and high electrode costs.

To overcome these issues, the DeltaSpot spot-welding system from Fronius features a continuous process tape that runs between the electrodes and the metal sheets. This protects the electrodes, brings clean, fresh material to the contact points before each weld, and reduces total energy consumption. 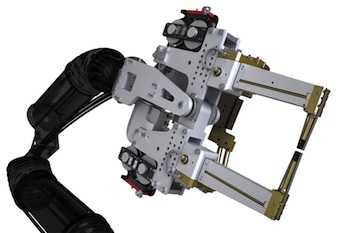 DeltaSpot from Fronius is an evolution of the pincer gun

The flexible and totally controllable process permits continuous spot welding of a consistently high quality, says Fronius, regardless of whether the material to be welded is aluminium, different grades of steel, or galvanised or organically coated sheets. According to the company, the demonstrable increase in product quality and system productivity, along with reduced energy consumption and material, all come together to provide a more efficient and stable production process.

Georg Fischer is among the automotive suppliers that have worked with Fronius to develop a DeltaSpot solution, notably to help manufacture the aluminium doorframe of the latest Porsche Panamera.

The latest DeltaSpot development is an evolution of its pincer gun, which is said to improve both the serviceability and the technology of the system, leading to shorter production downtime and lower operating costs. The transformer and the rectifiers have also been moved closer to the electrodes so as to reduce transmission losses.

Remote laser weldingAt last year’s Laser World of Photonics exhibition in Munich, Germany, Audi took to the stage to outline how a range of laser-based welding processes are having a positive effect on production. For instance, some lightweight parts on the Audi A8 are now being welded twice as fast.

Jan-Philipp Weberpals, from Audi’s Neckarsulm plant said that the remote laser welding of aluminium hang-on parts using a 4kW direct-diode source from Laserline was able to complete nine seam welds in just 12 seconds – half the time taken by more conventional, tactile laser welding. As well as increasing the weld speed, the remote laser is said to be 25% more energy efficient.

“Materials have become stronger, but welds have not… With our method, materials are shaped and bonded together at the same time, and they actually get stronger” – Glenn Daehn, Ohio State University

Among the major developers of laser welding technology is Trumpf, which as well as supplying OEMs is now rolling out its products to the supply chain, such as the recently launched TruLaser Robot 5020 Basic Edition. Said to pave the way toward automated laser welding, the compact robotic system has six axes and welds mild steel, stainless steel and aluminium at sheet thicknesses up to 4mm. Importantly, the system’s TruDiode direct-diode laser, with its 40% efficiency, means that users also benefit from low operating costs.

These costs are cut further if the company already owns a laser-cutting machine incorporating a TruDisk solid-state laser. This is because the laser can be used to power an extra unit integrated into its network, for instance the TruLaser Robot 5020 Basic Edition. This reduces investment by up to 50% and maximises beam-source utilisation.

Among the users of Trumpf TruDisk laser technology is GKN Driveline’s Zwickau plant, Germany, which two years ago switched from CO₂ to a TruDisk 5302 fibre-guided laser. “The solid-state laser welding system has allowed us to reduce our production costs considerably,” reports Zoran Bubic, who is in charge of central processes and operational planning at the Zwickau facility. “With an efficiency rate of nearly 30%, which is much better than that of our previous CO₂ system, the system uses less energy.”

Another advantage of the solid-state laser is that it operates at a wavelength that the material can absorb more efficiently, thus requiring far less laser power. Other GKN Driveline plants in Mexico and China will soon have similar systems.

Compared with conventional metal inert gas (MIG) or laser processes that use a cold wire feed, laser hybrid welding is said to achieve three times the welding speed and, thanks to lower energy input, consumes far less electrical energy while simultaneously reducing thermal distortion. Furthermore, arc welding consumables (and gas mixtures) can be used, giving a degree of control over the weld quality and properties greater than is possible with autogenous laser welding.

Welding operations at most OEM plants are automated. However, robots equipped with conventional MIG or metal active gas (MAG) welding systems must stop frequently to clean welding spatter from the nozzles. This offers plenty of scope for savings in time, material and energy. As a result, a number of automotive manufacturers, notably Hyundai Motor, have switched to the cold metal transfer (CMT) process. CMT is said to result not only in far less welding spatter, but also considerably more stable metal transfer and a significant reduction in the tilt angle of the electrode. This alone is said to reduce the stoppage time of robot welding cells by more than 60% as well as increasing energy efficiency.

In CMT, the wire movement is incorporated into the process control and heat is inserted only very briefly. Consequently, material transfer takes place with barely any flow of current. 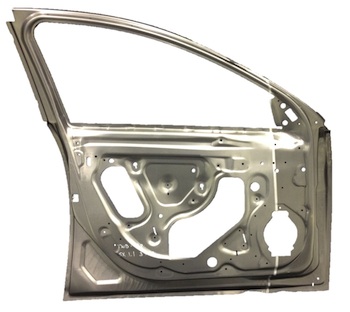 Friction stir welding In friction stir welding (FSW), the energy required at the weld lies between laser welding (which needs less) and MIG welding (which needs more), says The Welding Institute (TWI). However, a partnership between General Motors, TWB Company, Alcoa and Pacific Northwest National Laboratory (PNNL), has seen the development of an FSW process that is claimed to reduce production time and costs while delivering strong, lightweight parts.

Using aluminium, the partnership says that the new process can deliver a car-door inner panel that is 62% lighter and 25% cheaper than that produced with today’s manufacturing methods, while maintaining the speed, scale, quality and consistency required by the automotive industry.

The research team decided that improving FSW to allow companies to manufacture aluminium tailor-welded blanks (TWBs) had very good potential for expanding the use of this lightweight material in vehicles. With this new process, a single FSW machine can join more than 250,000 automotive components a year.

According to the TWB Company, more than 100 aluminium blanks were independently welded, formed and analysed in close co-ordination with GM. Since then, TWB Company says it has become the first in the world to install and operate equipment for aluminium TWBs with high-volume manufacturing capability.

Ultimately, of course, no two welding lines are alike. In turn, no two lines command the same level of energy consumption. Careful assessment of a welding line’s needs and power usage is always the first step in generating savings. From that point forward, facilities can decide to upgrade, streamline and monitor welding equipment in the way that best suits the plant’s needs and overall savings goals.

ABB’s Statcon and Dynacomp technologies for reactive power compensation are being used by Fiat in India to address weld quality issues due to challenges in local power quality. In addition, the solutions have helped to improve energy efficiency with regard to power factor, which has been boosted to 99.5%.

Statcon and Dynacomp are claimed to provide fast and smooth, dynamic reactive power compensation, and to solve a variety of industrial network power quality problems associated with fast and variable loads such as low power factor, voltage sags, flicker and high harmonic levels.

Statcon is a technology based on IGBT (insulated gate bipolar transistor – a fast-switching and highly efficient power semiconductor) that ABB says provides fast and dynamic reactive power compensation with a response time of only 20 to 30 milliseconds. It delivers smooth, step-less compensation by generating inductive or capacitive power and is suitable for improving power quality in weak networks.

Dynacomp is a thyristor-switched capacitor technology said to provide rapid and transient-free power factor compensation for low-voltage networks. A total of 23 Dynacomp panels of various power ratings were installed at substations that feed the powertrain, body-in-white, paint and assembly shops, as well as the R&D facility and utility systems.

The result of the ABB solution has been the stabilisation of the site’s power network; a significant decrease in power consumption; the avoidance of penalties from the grid operator for consuming excessive amounts of reactive power; improvements in welding consistency and productivity; and less maintenance in the welding shop. Furthermore, the solution’s power-save mode restarts automatically when loads are sensed, thereby saving on auxiliary power and eliminating manual starts.