Pressing and forming technology for composite materials are a key part of modern automotive production. Andrew Williams looks at the latest developments 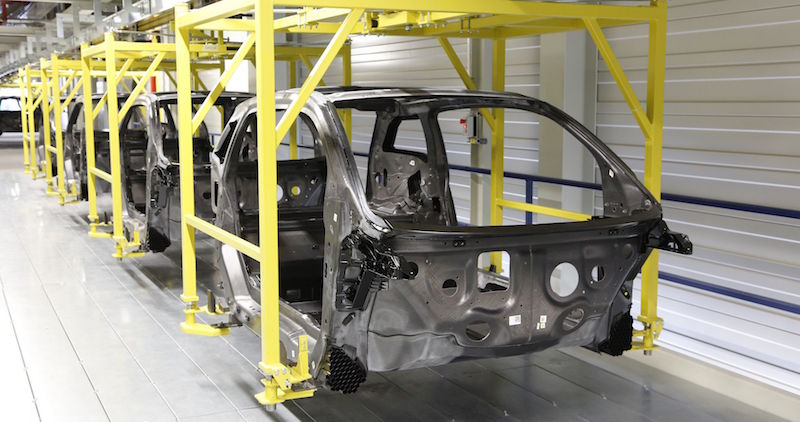 When manufacturing composite parts, companies throughout the automotive supply chain commonly rely on hydraulic press systems, which are generally far better at increasing the curing time of materials compared with traditional sheet metal forming with the use of a mechanical press.

Composite manufacturers can also choose from a variety of materials and technological processes as well as a range of matrix systems such as thermoset and thermoplastic. A recent innovation in this field has been the development of thermoset composite material processes like high-pressure resin transfer moulding (HP-RTM), which presses or forms composites in a number of key stages. To begin with, several layers of preformed dry fibres are put into the press, where a mix and dosage unit injects the matrix system.

One interesting example is a novel ‘congruent-bending-lines’ press feature, which is claimed to reduce rejection rates and improve part quality. Elsewhere, BMW also uses HP-RTM processes on ten Schuler presses for series production of carbon fibre-reinforced polymer (CFRP) ‘life modules’ for its i3 and i8 electric vehicles. “Series applications for approximately 25,000 vehicles with the complete life module are manufactured with composites by using the HP-RTM process per year,” says Thom.

A 36,000kN Schuler press has also recently been delivered to the Institute for Advanced Composites Manufacturing Innovation (IACMI) in Detroit, Michigan. The 4,000-ton machine, with a clamping surface of 142 x 94 inches, forms a key part of the ongoing expansion of an R&D vehicle scale-up facility. It is available for use by IACMI members working on a number of projects, largely in an effort to help the Institute meet US Department of Energy CFRP goals of 25% lower production costs, a 50% cut in embodied energy and 80% recyclability into ‘useful products’.

Reducing scrapAlso in Michigan, automotive parts supplier Plasan Carbon Composites, which manufactures carbon-fibre components such as bonnets, roofs and side panels for vehicles including the Chevrolet Corvette, Dodge Viper and Ford Mustang, has recently teamed up with Rockwell Automation to implement a software solution to reduce scrap waste from the high-speed presses operating at its Grand Rapids plant. As Danny McKinnon, controls engineer at Plasan, explains, the proprietary Historian software is employed to serialise and track each part moving through the pressure presses, and to “record and report process parameters within the presses”.

“The fact that there were so many variables to our process meant that it seemed almost impossible to figure out,” he says. “However, the software helped us to track each variable to uncover a pattern that revealed why we were getting scrap parts. In the process, this has greatly reduced press room scrap and is setting a new standard for quality in the plant.”

Adapting aerospace materialsElsewhere in North America, global automotive supplier Magna uses several pressing and forming technologies at its Composites Center of Excellence in Greater Toronto, Canada – the lead location for much of its development work in this area. This centre is a partnership between Magna Exteriors and the National Research Council of Canada which aims to support the automotive industry in developing next-generation vehicles that are safer, affordable, environmentally friendly and fuel-efficient.

On the material side, Andrew Swikoski, global product line director for Lightweight Composites at Magna Exteriors, explains that the centre carries out research into a range of different reinforcements “like glass and carbon fibre in continuous uni-direction, as well as fabrics and chopped formats.” On the resin side, it deals with both thermoplastics and thermosets such as liquids, pellets, sheets and prepregs, most of which can be processed via injection moulding, compression moulding or resin transfer moulding.

Swikoski claims that Magna is now “at the forefront” of several trends in the pressing and forming of composites, including the transformation of carbon-fibre materials used for aerospace parts and race cars into materials suitable for mainstream automotive manufacturing. He says that as well as making them affordable “we also reduce cycle times to form a part from hours to minutes or even seconds, as is required in automotive”.

“We recently launched a few lightweight composite parts into production, including the Ford Mustang grille opening reinforcement with a carbon-fibre filled PA66 injection moulding process,” Swikoski states. “Next, we launched a couple of carbon-fibre-reinforced epoxy prepreg hoods that are compression-moulded. Most recently we developed, in partnership with Ford Motor Company, a front subframe made with a carbon-fibre-reinforced sheet moulding compound that is compression-moulded.”

Finding smarter solutionsAnother recent development is the CLASS (Composite Lightweight Automotive Suspension System) initiative, a UK-funded research project to design a carbon-fibre replacement for the current steel knuckle/tieblade suspension component, which supports the rear wheel in a Ford Focus. According to Ken Kendall, head of structural composites at the Automotive Composites Research Centre (ACRC) at WMG, University of Warwick – which is a partner in the project, alongside Ford, Gestamp and GRM – the “extremely challenging loads” that this component experiences call for a “very novel manufacturing solution”.

Although the details have yet to be made public, Kendall reveals that the “backbone” of the manufacturing method involves the combined use of continuous and discontinuous fibres in a single moulding process. He says the bending, torsion and buckling loads are managed primarily by the continuous fibre tieblade, whereas discontinuous fibres provide attachment to the vehicle and suspension.

Kendall explains: “Nineteen layers of prepreg were cut and assembled into a 2D blank, which was then preformed and trimmed in matched metal tooling. The prepreg and sheet moulding compound (SMC) were assembled into the mould and compression moulded to make the complete part in a single process. The project is nearing completion and the testing program is currently underway.” 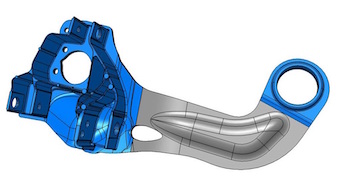 Looking ahead, Kendall believes that Automatic Fibre Placement (AFP) and Automatic Tape Laying (ATL) processes could one day be used to replace the cutting and assembly of fabric plies from rolls, helping to “significantly” reduce waste. Although he admits there are challenges in achieving this, not least the slowness of the processes traditionally used in aerospace, Kendall points out that there are opportunities to increase the speed and reduce the equipment costs by relaxing the manufacturing tolerances when switching to automotive applications.

“Material cost is probably the biggest barrier to widespread application of composites in the automotive industry,” he says. “So, in addition to reducing the costs of raw materials like fibres and resins, there are opportunities in reducing the cost of converting these materials into fabrics and prepregs. “Waste reduction is also key as current waste levels when stamp-forming blanks is unsustainable. Re-use of this waste in primary component manufacturing processes is an option being investigated.”

Meanwhile, Thom predicts that material innovations will be a key part of the use of composite pressing and forming technology, and machinery for the automotive industry over the next few years, for example via the development of what he describes as an “intelligent material mix”.

“The use of just carbon composites won’t be economical in the near future. The right material at the right position has to be the goal. Additionally, hybrid processes will combine the advantages of composites and steel,” he says. “For example, a completely automated process, with significant waste reduction compared to some of the existing processes, will be established and required.”