Building on common ground with Fanuc

GM’s drive for a common assembly technology is aimed at a more streamlined and stable global supply base. AMS looks at what the Global Mid-Size Vehicle platform means for Fanuc.

General Motors is going truly global in the next few years with its Global Mid-Size Vehicle platform. Adaptable for both front and all-wheel drive applications, the platform will be used on a variety of mid-size vehicle offerings in Europe.

“Global Mid-Size Vehicle is the first global programme for us here at GM, we’re going to build it in Asia/Pacific, North America, and in Europe,” says Masoud Amin- Javaheri, Director in charge of GM’s Conveyors, Controls, Robotics and Welding (CCRW) group in Europe.

Not only will Global Mid-Size Vehicle be a global platform in terms of building mid-size vehicles for a worldwide consumer base but, according to Amin-Javaheri, the plants building on the platform will be following a global bill of equipment appropriate for CCRW, one of which happens to be robotics.

The mandate of GM’s CCRW is to drive common assembly technology throughout its plants around the world, whether it’s a welder in a body shop, roll test in general assembly or spray equipment in a paint shop. The group typically sends RFPs (Requests for Proposals) to all vendors of a particular assembly technology and eventually picks one to supply all plants worldwide. The contract lasts for three years, with an option for an additional two if both parties agree.

GM has found huge advantages in going common with various technologies because integration, layout, troubleshooting and lessons learned can be transferred from plant to plant. If a plant floor in the US is configured using the same technology as a plant in Spain, engineers simply follow the same schematics; there’s no need to reinvent the wheel for each facility. 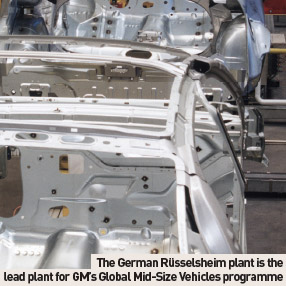 As far as robotics is concerned, for the next few years the automaker has settled on Fanuc says Amin-Javaheri, awarding the supplier a contract to supply robots globally at a globally negotiated price.

“The type of robot they’re supplying is the RJ3IC controller with an R2000IB robot arm, and they have a portfolio of these robots that we use, depending on the application,” he says. “You have the heavy duty robots with the big reach and big payload, all the way to the smaller robots with a lower payload and smaller payload, for Mig welding for example.”

The vast majority of the robots are used in resistance spot welding applications, where robots add value to the vehicle.

In keeping with GM’s insistence on eliminating non-value added steps in its assembly processes, material handling applications must be coupled with some kind of value-add step, such as moving a part under a pedestal welder while transferring the part from one operation to the next.

Just as GM measures operator utilisation rates for a given assembly process, it also measures the utilisation of its robots. “We look at how much value it adds to the part,” says Amin-Javaheri. “For example, the robot cycle time: within that timeframe, how much time is the robot doing work and how much is it sitting idle; that’s what we look at for utilisation.” 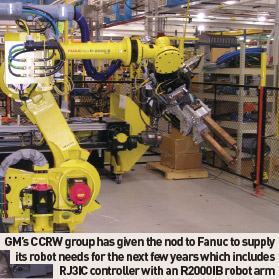 New from a robotics welding perspective for GM is laser edge welding between the roof and body side to eliminate moulding on the roof.

“Another new application GM is rolling out for Global Mid-Size Vehicle is mounting of machine vision sensors on the robot gripper for glass mounting applications,” says Amin-Javaheri. It identifies the vehicle and the glass, grabs the glass and finds the best fit as it installs the glass on the vehicle body. A fixed mounted machine vision sensor was implemented before. Going to robot mounted sensors means we will improve cycle time, have more accurate mounting and fitting of the glass to the body and further reduce cost when processing multiple body styles.”

At one time, going common for CCRW’s robotics team meant common specs: providing robot suppliers with specs on what they required so they could buy “plug and play” equipment from different manufacturers that would all work in the same application.

“But at the end of the day, all of the suppliers have their own technology that they want to drive based on customer feedback,” says Amin-Javaheri. “They’re all out there to beat each other and be more innovative, just like any other supplier.

“The fact of the matter is you can’t manage a free market, so we as a company decided that in order to drive commonality through our manufacturing equipment, and consequently our processes, we had to settle for one supplier for a period of time based on a lean set of global requirements to meet our global Bill of Process and our quality and uptime targets. So we leaned our specifications, made them global, competitively bid and chose Fanuc; this is the basis for our strategic direction.

By using one supplier for three to five years, CCRW has found it brings stability to GM’s manufacturing processes, and allows the automaker’s engineers to leverage the global knowledge base as they install the same robots in plants around the world.” 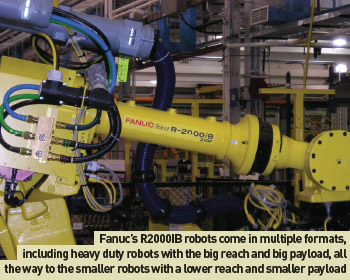 While GM has a history with Fanuc (at one time the automaker and Fanuc had a 50/50 joint partnership called GMF which supplied the bulk of the company’s robotics), Amin-Javaheri says the most recent RFP went through the normal purchasing, bidding process, with a number of suppliers: “Fanuc came out on top in terms of value and cost.”

“Ultimately, when CCRW decided on Fanuc it wasn’t a difficult decision because we had a large deployment of Fanuc robots in all the four global regions in which we operate. Had we made a different decision, implementation would have been more difficult, but we were prepared to do so. However, as a part of our legacy strategy, we always allow deviation from Fanuc products on a case by case basis in order to optimise operational cost – such things as commonality among our equipment within a plant, training and spare parts. But in this case it all worked out: the right price, the right supplier, the right value – given our history it was the right decision.”

“However, that’s not to say that we’ll continue with Fanuc for the next round. It was truly a value assessment of the supplier’s global footprint and technical capability – we looked at multiple aspects before we made a decision."

In future robot incarnations, Amin-Javaheri believes suppliers are going to be looking at ways to integrate robots and process equipment: “What I see happening in industry is a consolidation of the process equipment inside the robot controller to further integrate hardware. [This means] the robot controllers are more capable from a processing perspective; the technology is definitely there to implement.”

He also believes that the future will see more streamlined suppliers, with one supplier supplying robotics, process technology, engineering and integration expertise, instead of going to multiple suppliers, as is the case today. “And through further integration, we’ll reduce costs,” he says.

“I would say all the suppliers are looking at this, though they’re approaching it differently. Some are developing partnerships with welding suppliers. Some companies are buying the basic products and integrating them themselves: a onestop shopping model. It’s not a simple task because the OEMs – GM and others – are specifying the equipment, and if the spec happens to be not the one that you’re married to as a robot supplier, then your investment is not going to pay off. With the effort they’re putting into it, the OEMs need to be on the same page as the suppliers when that happens.

“For example, if I go and buy a robot from Fanuc and they offer me a ‘Brand X’ weld controller in the package, I have to be ready for it as a company. I have to know who’s going to service it, and who’s going to support it – that all has to be developed over time.”

But ultimately, Amin-Javaheri believes robot requirements will be “soft” requirements: drive cost down, get higher payloads, bigger work envelopes and lower maintenance requirements. He believes robot manufacturers are doing a great job keeping up with the technology and innovations. Core technology development should be left to the robot manufacturers since that is what they do the best and end users should focus on applications that improve productivity and uptime.