Bright ideas for energy use 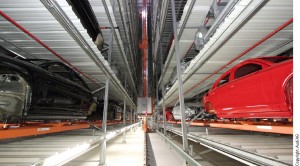 Energy is arguably the largest controllable element in automotive manufacturing. AMS investigates how to get the biggest ‘bang’ for the smallest ‘buck’

Raw material costs fluctuate according to classic supply and demand, leaving aside the impact of leveraging by hedge funds. A car needs metal and is not easy to alter the quantity of material used in the production process; you need to design a new model and invest in new systems to build it. But energy is not the same. You can impact the cost simply by using less – and you can use less by making sure you are getting the best out of your systems. This is not about alternative or renewable energy sources, although those clearly have a contribution to make; this is about energy management inside production facilities.

The first place to start is the compressed air system, otherwise known as ‘the fourth utility’ or ‘the forgotten utility’. Many systems are so wasteful of energy that they do not stand up to close inspection. Getting a kilowatt of power to the point of use involves a 10-fold cost; if a single kW costs 5p then it costs around 50p to deliver it.

It is probably no longer true that companies do not know how much their compressed air actually costs, but the scale of energy loss remains high. Leaks, artificial demand (such as unnecessarily high pressure) and ‘inappropriate uses’, such as activities that can be performed better by other equipment, have been found to add up to half of all air in the system being wasted.

If the current compressor is a 2,500hp set-up, bought a few years ago when more equipment was attached to it, and a quick audit finds that only 200hp is required, then replacing it will bring immediate benefits.

However, if the 2,500hp system seems to be working flat out supplying a range of equipment and the reality is that half its output is being wasted then enormous savings are possible, with an ROI generally achievable inside two years. The really deep savings can be achieved only through a comprehensive review and the development of a detailed strategy.

Toyota has been active on the energy management front for some time. Its Earth Charter, formally announced in 1992, contains a series of five-year plans to reduce energy consumption and waste generation, and takes account of entire product lifecycles. It has cut energy use by 40% as well as reducing water consumption and emissions – and this during a period of growth.

The full Toyota Production System arsenal has been deployed; energy-saving teams have been established and specific management skills are being developed to identify key areas and points of opportunity. Toyota UK has achieved a 12.5% total energy reduction since 2002 – actually 25%, like-for-like. By 2050, Toyota aims to double output while halving resource use. 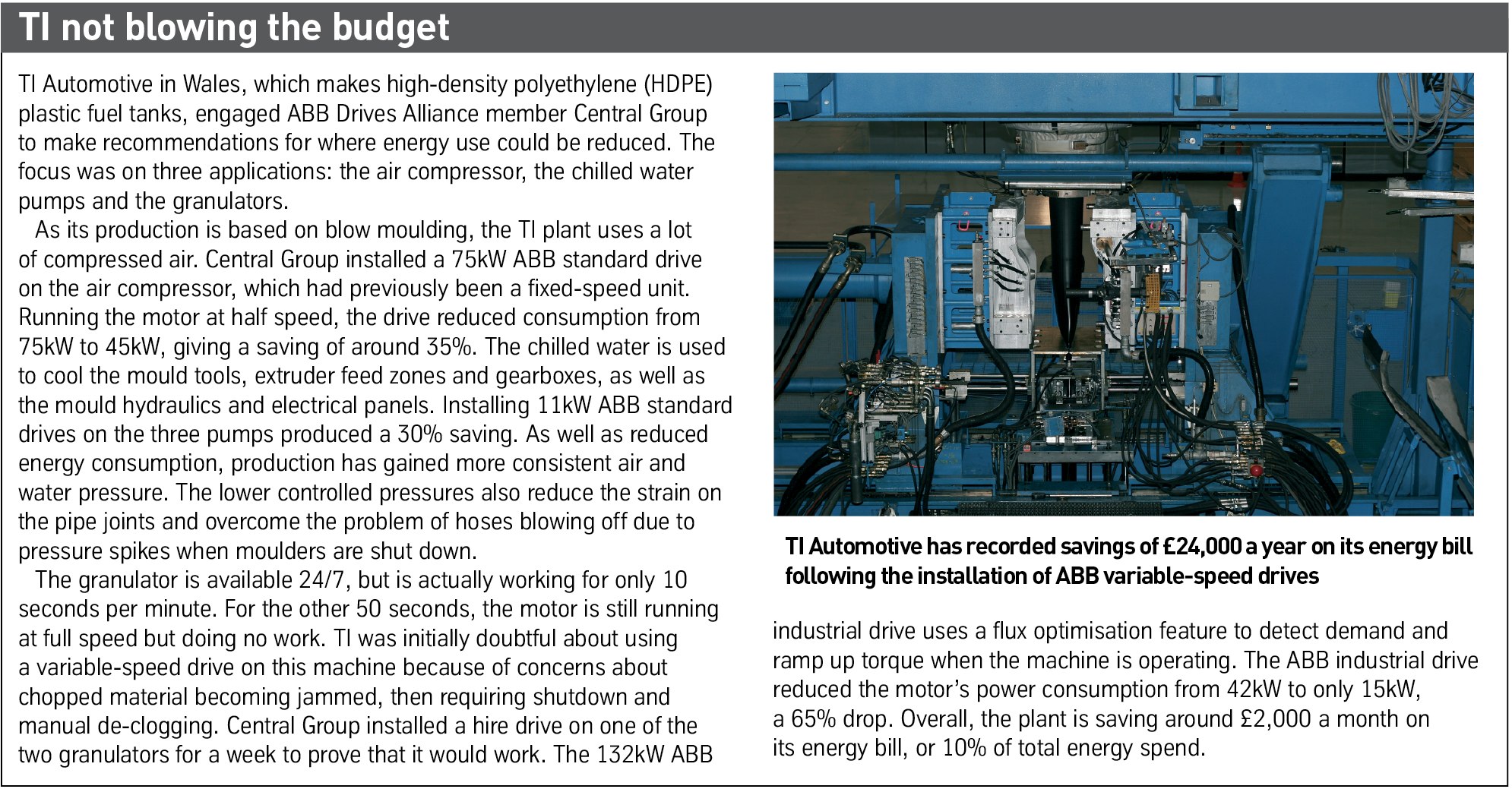 Jaguar Land Rover is taking action as well. The company’s Sustainability Report analyses emissions and waste data and makes clear its increasing focus on improving energy usage. As JLR is using progressively more aluminium, which can be energy-intensive in production, this is not an area to be ignored. The company says recycled aluminium is less energy-intensive and that years of work mean its current-generation vehicles cost no more to produce than previous editions, which featured more steel.

The company is not focusing solely on manufacturing processes, though. Its new engine plant at Wolverhampton is being designed to achieve an ‘excellent’ BREEAM assessment and to use less energy in heating, lighting and cooling. All equipment at the plant will be fitted with meters to monitor energy use, with control and operation by a central building management system to maximise efficiency. Waste heat from compressed air machines will be used to warm the building space.

In addition, JLR is implementing plans to monitor energy usage by thermal imaging at Gaydon and Whitley. At Gaydon, ceiling fans have also been installed which force warm air back from the ceiling void down to ground level, in order to save on heating. Meanwhile, the lighting and heating are being upgraded at Solihull and the building energy management system is being replaced at Castle Bromwich.

Partnering for progress
Achieving the deep savings that are possible in energy management involves the engagement of partners on the supply side. ABB has a network organised under the Drives Alliance brand, which provides analysis and makes recommendations. Rockwell Automation has defined a process which is reminiscent of Six Sigma and SPA, beginning with the identification of baseline conditions, analysis of potential improvements, then the implementation of cost-effective solutions and tracking progress. 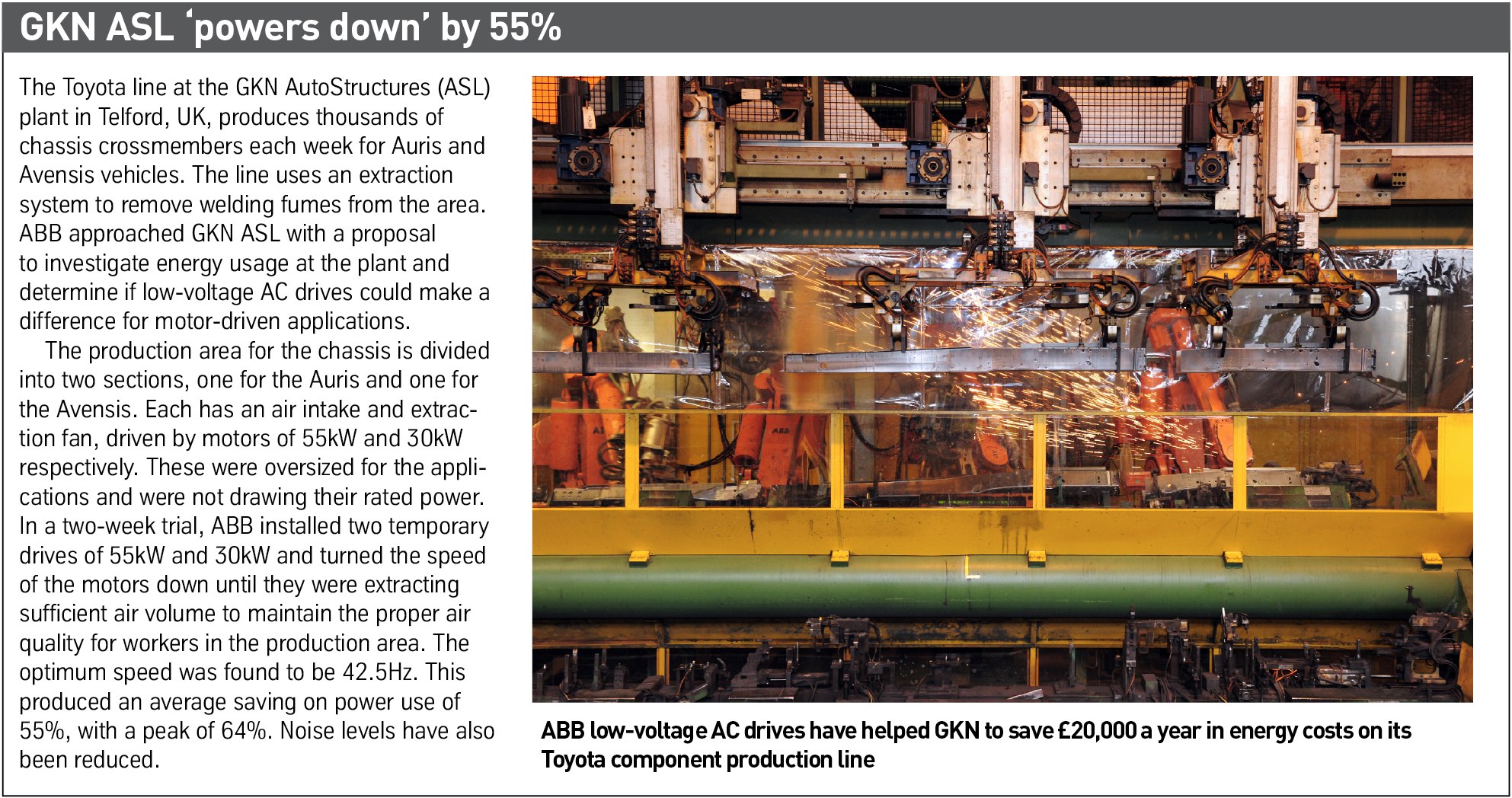 Siemens has also put in place procedures and technologies specifically designed for energy optimisation. Siemens points out that regulatory requirements of energy-efficient production and reduced carbon emissions are important drivers too. Energy management is not merely a good idea: it’s the law. “The ISO 50001 energy management system standard sets out to define internationally applicable parameters for reducing energy costs, greenhouse gases and other environmental impacts,” says a Siemens spokesperson. The company claims that its B.Data energy management software is “tailored precisely to the implementation of wide-ranging requirements”.

As the spokesperson explains: “It records the status quo of all energy and material flows such as water, electrical energy, pressure or steam required in production and in all ancillary processes. Different consumption levels are allocated based on actual usage and documentation is created. Using key performance indicators, B.Data delivers a solid basis for decisions relating to energy optimisation.”

According to Siemens, the implementation of even a few simple measures, such as leak detection or more even load distribution, can achieve energy savings of 5-10%. This effect can be enhanced by additional measures such as the use of modern, energy-efficient motors, which can reduce energy consumption by up to 40%, or alternatively by implementing electric drives that can be used in conjunction with Siemens frequency converters, which enable reductions of up to 70% in the energy consumption of fans, pumps or compressors.

“Additional energy-saving potential can be leveraged through the identification and compensation of load peaks and the co-ordinated shutdown of plant sections during idle periods using the PROFIenergy data interface,” says the spokesperson. Siemens has helped to deliver savings at SEAT in Spain and Audi in Hungary.

ABB says that with its assistance, one automotive manufacturer has cut electricity costs by over £100,000 per year through a comprehensive energy management strategy including: effective maintenance; replacement of worn-out or damaged piping and other factory infrastructure; and the deployment of variable-speed drives.

Impressive savings have also been achieved in smaller-scale projects, such as £24,000 per year at TI Automotive in Wales and £20,000 per year at GKN AutoStructures in Telford, UK.

Almost all automotive manufacturers are now actively seeking improved energy use, and it’s not just about costly and potentially unreliable renewable alternatives. Better energy management within manufacturing facilities both supports productivity and cuts costs; the commercial argument is incontestable.