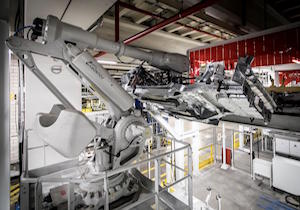 Belgium – The company’s first small premium SUV is based on the Compact Modular Architecture which will underpin all new cars in the 40 series. Volvo has already taken more than 13,000 orders and deliveries will begin early next year.

“Our people have put in long days and many hours to prepare the plant for the start of XC40 production and they have done a great job,” commented Håkan Samuelsson, CEO and president of the company. “The XC40 represents a bright future for Ghent and for Volvo Cars.”

The XC40 is the first model on the new small car platform that was developed in partnership with Geely. The CMA is intended to provide synergies and economies of scale in the small premium car segment.

Volvo has prepared its Ghent plant to become a global production hub for CMA vehicles by adding an 8,000 sq.m extension to the bodyshop and installing 363 robots. One large robot, known as “The Beast”, lifts lower car bodies up to a conveyor belt near the ceiling; the machine is unique in the Volvo Cars production network.

Ghent has been producing Volvos since 1965 and now makes the V40 and V40 Cross Country small hatchbacks, plus the V60 and S60, alongside the XC40; until recently, it also manufactured the first-generation XC60 mid-size SUV.

Volvo’s SUV line-up now consists of the XC40, XC60 and XC90 and the company says that the addition of the XC40, in the fastest-growing segment in the industry, “paves the way for continued sales and revenue growth”.