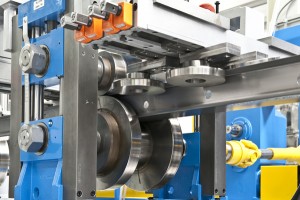 Rollforming has demonstrated its capability to process ultra-high strength steels (UHSS) with a tensile strength up to 1,600MPa. Such steels already contribute significantly toward reducing the weight of today’s vehicles. According to automotive experts at the University of Erlangen-Nuremberg, extended use of UHSS has a further weight reduction potential of up to 20%. While some materials such as aluminium, magnesium or carbon fibre reinforced plastics have a substantially better strength to weight ratio, any reduction offered by these materials must be considered alongside the much higher costs.

The majority of automotive body parts are produced by cold stamping on presses. The maximum tensile strength which can be processed economically by cold stamping is between 800-1000MPa. Higher tensile strength up to 1,600MPa can be achieved by hot stamping (press hardening). Compared to rollforming, it offers almost unlimited 3D forming capability. On the other hand the higher process cost of hot stamping results in a cost difference of approximately $2 for a typically rollformed part, such as a rocker panel.

A press tool is designed only for one specific part, the tool cost is usually much higher in comparison with rolltools. Tool cost does not have a major impact on the total part cost, as long as parts are produced in sufficient quantity. This is not the case, however, when car producers are forced to bring many more car models to market, leading to a decrease in the volume of each individual car model. Therefore mass production of individualised components need consideration to limit the increase of tool cost. Rollforming lines can produce part variants without the need for new tools.
It can efficiently contribute to cost reduction for a number of automotive parts, even under the conditions of increasingly individualised mass production.

Punching press with rapid die change
Meeting the challenge
Today, UHSS parts such as rockers, bumpers, door beams, crash tubes and many others are manufactured economically on rollforming systems. The strength of the material itself does not represent a challenge to a rollforming machine as long as it was designed correctly for the higher forming forces. Even possible wear of the rollforming tools is not really an issue. After producing several million parts in UHSS, a rolltool does not show any significant wear. The reason is simple; there is almost no differential speed between the forming rollers and the material being formed. This is not the case with press tool where wear is highly critical and requires massive counteraction, such as sophisticated surface coating and excessive lubrication. The real challenge of UHSS for the rollforming process is the enormous fluctuations of the mechanical properties and, as is often found, flatness issues.

Dreistern has developed new forming technologies in order to cope with the challenging properties of such steels without compromising tolerance demands. These technologies include a few important elements. One is named by the Dreistern tool designers as, “controlled bending”. It means that the sheet metal is always guided by rollers from both sides during the entire forming process. In this way unacceptable quality deviations caused by changing material properties can be efficiently compensated. In addition, the end flare, which is typical for conventional rollforming is eliminated. The numeric simulation of the forming process and the comparison with actual measured outcomes has played a key role during development. As a result, a rocker formed from Arcelor Mittal martensitic steel MW 1500 can be produced in daily operation with a tolerance range of ± 0.5mm in all dimensions.

Punch prices
In most cases, automotive components show pierced or embossed areas. Consequently almost every automotive rollforming installation contains pre- or post-punching equipment. Since such equipment can increase substantially the investment and part cost, it is worth considering cost saving alternatives to existing solutions. Dreistern developed a series of cost effective compact hydraulic punches in the range of 200-2000kN. They can be equipped with high-speed hydraulic cylinders for up to 120 strokes per minute. If a specific part design requires a higher press force of two or more, such presses can be installed in the line, one after the other. Sometimes a punch pattern is composed by a constant and variable portion. In that case, only the tool for the variable portion is exchanged. So, changeover time and tool cost can be saved. This would not be possible with one large punching die.

Automotive parts are frequently required as right-hand and left-hand versions. While the cross-section remains the same, the punch pattern is reversed left to right and requires two different punching dies, which have to be exchanged. Since, in most cases, rollforming lines work with a continuous metal strip, the process cuts off the strip and removes the punching die laterally. As a consequence, scrap and production stops occur. Dreistern engineers found a simple solution to eliminate this. Instead of exchanging the punching dies in a lateral direction, the second die is in a waiting position in front of or after the press (in a longitudinal direction). Once the change has to be executed, the dies are simply exchanged by pushing into or out of the press without the need to cut off the metal strip. So, scrap is totally avoided and the changeover is executed much faster.

This is not the only interesting feature of this punching press concept. The press can control up to 21 individual punches which can be activated at full production speed. This allows for highly flexible punch patterns. If an even higher flexibility is required, the press can be transformed quickly into a CNC (plotter type) press by inserting a special CNC punching insert. This is especially useful for highly flexible low volume production in small batches. Several lines with such presses are presently assembled at the Dreistern shop floor in Germany.

Settled sweep
The integration of bending operations into rollforming lines offers two main advantages. It simplifies the process for parts with a sweep. Offline bending operations require straight ends. Such ends have to be cut off in case the part design requires a sweep to the end. This scrap can be avoided by rollforming. Bumpers and other automotive components, such as a B-pillar, with a constant sweep radius have long been produced on rollforming machines. Today´s front module design often requires at least two different radii – a large one in the middle with 2,000-3,000mm and a smaller one on both ends with 400-600mm. In particular, these small radii could not be produced up to now with the required quality because of wrinkles and waves in compressed areas.

Dreistern engineers demonstrated a newly developed inline CNC bending process, supporting the feasibility of producing bumpers in perfect shape without wrinkles and waves. Because of the much lower cost, this technology is an attractive alternative to stretch bending. At the same time this technology offers fast adaptation of the bending without a tool change. It’s a capability that allows the cost effective production of highly individual bumpers. 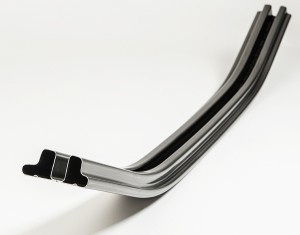 UHSS Bumper with Variable Radius
Customising for mass production
For quite some time, rollforming lines have not been based purely on the rollforming process but include a number of auxiliary processes such as piercing, embossing, welding or even assembling and packaging operations. In the past such lines were dedicated to one or a small number of specific products. Nowadays, rollforming lines are increasingly producing highly variable parts on a made-to-order basis for various applications. They are producing parts for kitchen drawers in all dimensions and ready for assembly “just-in sequence” to the assembly lines of kitchen manufacturers requiring a product change of the rollforming line many times every day. The same applies for producers of high bay warehouses. They have to produce all necessary components of an individual warehouse in the shortest possible time. The designs of all these parts are extremely different. But they all rely on the capability of rollforming to rapidly adapt to different part geometries without the need for costly and time-consuming tool change. The control systems of these machines are linked to enterprise resource planning (ERP) systems in order to receive the next production order and to report about the present execution status.

It is the beginning of a new generation of production technology, which Dreistern calls Rollforming 4.0. It might contribute also to some of the challenging requirements of the automotive industry under the conditions of customised mass production. dreistern.com