Ford has invested in its Saarlouis plant to produce the latest generation of its popular Focus model. Nick Holt visited the plant to get a look at the upgrades to the production process 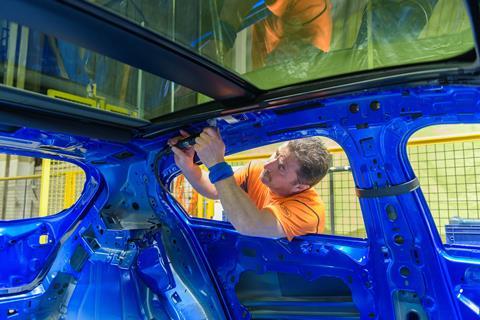 One of the key additions at Ford’s Saarlouis plant has been the introduction of two hot forming press lines and the eight related laser cutting stations for the high-strength steel sections in the Focus’s body structure. Supervisor of this section Christoph Schmidt, took us around the line and discussed the various operations involved

“We have four loading stations for the six different blanks and from these, using six new dies, we produce 11 part numbers for the new Focus model. We started work on this line two years ago in readiness for start of production for the Focus in May last year. The whole line is new including the presses and the water cooled dies.” Asked about the capacity of the hot forming lines Schmidt said: “Maximum current capacity for the lines is 250 jobs per hour, but there is capacity in both the press lines and laser cutting stations for the current Focus production and also parts for the new Kuga being produced at the Valencia plant, which Saarlouis will supply.

Asked about the maintenance of these new cooled dies, and how it differed from the usual cold forming tools Schmidt noted that: “In the conventional press shop it’s not the same situation. There is usually a cleaning process is after three or four press runs with comparable structure parts but for the hot forming process we have to clean the dies after each run [batch].” Given the need to disconnect and reconnect the cooling systems, the die change over takes between 20 to 30 minutes according to Schmidt. “We run a five-day production cycle on the hot forming lines then switch over the dies for the next batch of parts.”

From the loading stations the blanks are fed into the furnaces using a steel roller conveyor up to the entry point where the rollers are then made of a heat resistant ceramic material to carry the blanks through the heating process. This part of the process is far more complex than merely heating the steel parts. “There are 15 different heating [zones] and we can adjust the temperature for each zone,” explained Schmidt. The furnace has two different heating systems starting with a gas system and in the last three sections using electrical induction. The reason for the two systems is firstly for energy efficiency and secondly to ensure a consistent temperature for the blanks as they leave the furnace and are transferred into the press. 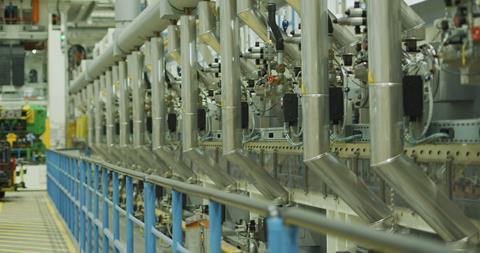 Temperature is a critical factor in the heating process. As the blanks pass through each of the 15 zones in the furnace the temperature of the part is both increased and decreased as part of a conditioning process for the steel and the aluminium-silicon coating on the material. The temperature is closely monitored for each part ensuring the heat is evenly distributed across the blank using thermal imaging systems. The images provide a coloured temperature map of the part, making it easier to identify any areas of the blank that are too hot or cold at a given stage in the process. Schmidt noted this was a very important part of the quality control process as temperature variations could result in weakness in the finished part. The time taken for this heating/conditioning process varies depending on the thickness and dimension of the part, thicker, larger parts taking longer to heat and cool. This quality control process also records the batch numbers to ensure each part can be traced.

The heated blanks are then transferred by press feeder in to the waiting press. Due to the cooling process the cycle-time at this stage as around three to four seconds, and it’s here that the formed part reaches its full strength (around 1500mpa). The hardness of the steel means that laser cutting is the only effective way of trimming and finishing the parts and Ford has invested in eight automated laser cutting stations located next to the hot forming line. Parts produced here include A-pillar inner and outer sections, plus rocker panels.

A big part of the hot forming process involves ensuring quality and consistency in the parts produced. As mentioned, the heating process for the steel is closely monitored but in addition the team carryout a number of post-production tests. “We use two different tests, temperature and the core hardness,” explained Schmidt. Another factor the team closely monitor is the thickness of the aluminium-silicon coating on the steel. Too thick and it creates problems when welding the steel; too thin and there are issues for paint application. So, this is a balancing act in the hot forming process to meet the coating specifications for both the body and paintshop, while ensuring the steel has the require strength. 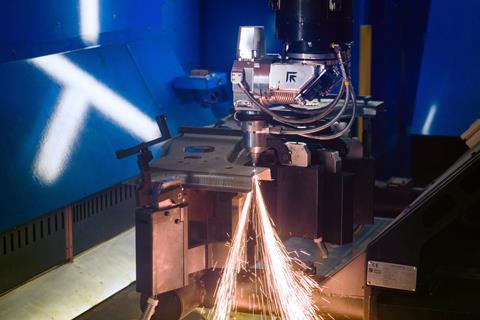 Another area that has seen investment in new processes is the bodyshop, specifically welding the roof panels. There are two new lines, one building four and five-door models the other five-door and wagon (touring/estate) models. Previously the roof sections were spot welded in place but this required the fitting of an additional moulding to conceal the spot welds. A new laser brazing process leaves a much improved finish that removes the need for an additional trim to be added. The original laser system had been piloted at the Valencia plant on the Mondeo, and Saarlouis has benefited from the lessons learned at the Spanish plant. One of the primary considerations was the issue of contamination in the weld due to the protective oil coating on the steel and also dirt and dust sticking to this.

The obvious solution was to clean the edge of the roof panel in the area to be welded. The laser braze lines are fully automated and the pre-clean process that has been developed is undertaken by two of 1,013 robots installed at the plant. The roof edge (manipulated by one robot) is drawn through a cleaning tape system held by another robot (it looks similar to a movie projector with two spools moving the tape), this removes any contamination from this small area on the roof edge prior to it being positioned ready for brazing. Bodyside-edge is cleaned as well.

In addition to the automated cleaning process another innovation has been to use a laser head with a three-focus system. Two leading laser spots burn the zinc layer on the steel panels and last particles of dirt, to ensure a clean and smooth soldering while the main spot performs the braze.

Walking around the Saarlouis plant it’s clear Ford are not afraid to automate processes, although the approach to this is measured. In the final assembly area there are two trim lines and a single chassis line. At the time of our visit the plant was producing both the C-Max and Focus models, however, C-Max production was scheduled to be discontinued.

The assembly lines are completely flexible in regard to which variant they produce, according to final assembly and trim manager Martin Fischer: “We produce five vehicle variants in a completely [independent] mix here. So, we are not doing them in batches.” This flexibility is helped by the use of an overhead railing system used to move, raise and lower the vehicle carriers. Each carrier is driven independently and thanks to a bar code that runs the length of the overhead rail they can be monitored and positioned exactly. This allows the gapping between vehicles on the line to be adjusted as needed. One operation where the move to automation had been reversed was the fitting of the powertrain and suspension to the body. Previously it had been almost fully automated but Fischer noted that in this particular case it ultimately lacked the flexibility when vehicle models were changed.

Commonly final assembly operations are carried out manually, with some small mechanical assist systems. This suits the flexibility, quality and efficiency requirements based on the nature of these operations, but Ford has fully automated the installation of instrument panels (IP), a large, bulky section of the interior that requires careful handling. There are two automated stations for this process but it’s not a new innovation. “This has been automated for nearly 10 years. We did it for the old Focus model,” noted Fischer. This runs continuously but the speed of the line at this point is varied to ‘gap’ the vehicles and allow for the instrument panel fitting without stopping the line. 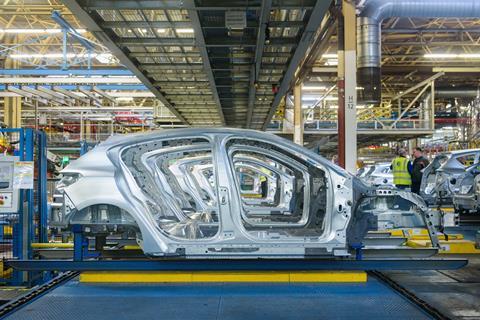 It seems a complex operation to automate given the need for speed, dexterity and avoiding any damage to the component. But Fischer pointed out that: “we just have few difficulties compared to the complexity [of the operation]. It really runs well.”

Interestingly, Fischer noted that not everything in this system was designed for full automation. The conveyors delivering the instrument panels to the station were part of the older manual process, because of this the hanging units supporting IPs are not all 100% the same. So, a camera system locates the exact position of the pick-up points on the IP and guides the robot, allowing it to grip in the correct locations avoiding any potential damage. The part is also scanned for its identification label ensuring the right IP is being fitted to the vehicle. Fischer added: “In addition, there is a system so that if the fitting forces are too high, the robot stops, so as to avoid damaging the IP or the body.”

Elsewhere there is more collaboration between the automated and human operators. Fitting the large glass roof to specified models is a good example of how Ford balances the operations between robots and people, it also highlights some of the limitations of automation. A small sub-line handles this job, where robots precisely apply the adhesive and a camera system checks that a special primer (to ensure proper adhesion with the glass section) has been applied precisely. The robot the places the glass panel into the roof aperture then the human worker takes over. His role is to carefully adjust the position of glass panel in the body aperture using basic tools and lot of experience. Watching this operation being performed demonstrated how difficult it is at present for automation to replicate the subtleties of human experience and dexterity in the manufacturing context.

The human/robot collaboration continued in one of the last stations before vehicle’s completion. This station calibrated the camera and radar systems that are part of a smart driving package, it is also where the vehicle’s management system is being checked. And finally the headlights and fog lamps are aligned. At first glance the task assigned to a pair of small, service type robots seemed relatively mundane and simple; adjusting the fog lamps. However, observing the operation you can see the logic in using the cobots, as the low position of the fog lamps makes it an ergonomically challenging task for a human worker to perform repetitively, while the two small robots mounted on a movable gantry can complete the job on both side of the vehicle simultaneously.

Also the cost of using this type of robot is relative low according to Fischer: “One big advantage of this type of robot is you don’t need a [cell] because that’s the expensive part. You need sensors, light barriers and special software to ensure everything is safe. The robot works very well but is relatively cheap.” Saarlouis is a good example of a volume production plant for a popular, affordable, mid-segment ICE vehicle. The company adopts automation and new technologies but not, it seems, as a blanket policy. Instead it’s a considered mix of old and new, creating a workable, cost effective balance in the production operations