Changes ahead for Europe

Makers such as Jaguar Land Rover, Volkswagen, Ford and Daimler are among those building new plants or expanding existing ones to take advantage of benefits such lower wages, improved productivity and a flexible and often skilled labour base. Generous incentives are another enticement too, maybe too generous, something the European Commission’s recently announced investigation into Slovakia’s financial package to woo Jaguar Land Rover to build its new plant there, will probe.

Production levels are on the rise. The Czech Republic is now the EU’s fifth largest producer of vehicles with 1.34m built in its four assembly plants in 2016, according to figures from the European manufacturers’ association ACEA. That puts it ahead of Italy and behind Germany, Spain, France and the UK. Slovakia could also overtake Italy after the Jaguar Land Rover factory ramps up to its maximum capacity of 150,000 after coming on stream at the end of 2018. Last year Slovakia’s three assembly plants produced 942,546 vehicles, putting it ahead of Poland, Hungary and Romania, all of which made the top 10. 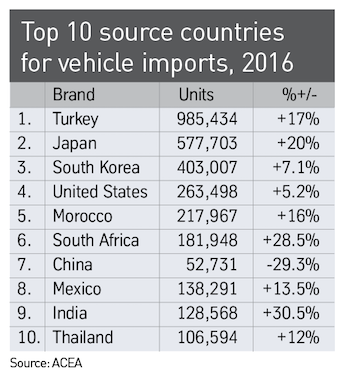 The importance of the car industry to these countries is becoming enormous. The Czech Republic and Slovakia report the highest proportion of working age population employed directly by the automotive industry (3.2% and 2.8% respectively). The EU average is 1.1%, according to ACEA figures from 2015, the latest available.

They’re not all as productive. According to ACEA figures, Spain leads the productivity table with 19.2 cars built per automotive manufacturing employee (working in an assembly plant), with Slovakia second with 13.7, again based on 2015 figures. Slovenia is fifth at 10.1 vehicles behind Belgium and Finland (home to the Valmet contract manufacturing plant), but Poland is well below the EU average of 7.6 vehicles with just 3.7 while Romania is at 2.3. Poland however will be disadvantaged because it makes more heavy commercial vehicles for the likes of MAN, Scania, Volvo Truck and Neoplan. In the main, eastern European countries build passenger cars (we’re not including Turkey in this feature).

Competitive labour costsWages are rising in this region, however, for a company like Jaguar Land Rover, the country is still a great deal cheaper than its UK base. “The labour costs will be far more competitive than those seen in Western European locations, including the United Kingdom, standing at around a third or less below in some cases,” says Ian Fletcher, principal analyst for IHS Markit. The premium manufacturer made its decision in July 2015 after intense negotiations involving, in the final push, Slovakia and Poland. JLR, which was using the plant to expand capacity globally rather than building closer to markets, says Mexico was also in the running the end as well.

For JLR’s part, it says the investigation was inevitable given the size of the investment, which totals €1.4 billion. It argues Slovakia’s attraction was more to do with the fact it had a proven record of building premium cars at VW’s Bratislava plant, which also makes bodies-in-white for the Porsche Cayenne and Bentley Bentayga. “Slovakia demonstrated it understood the requirements needed to put together a quality product,” says JLR operations director Alexander Wortberg.

The greenfield site in Nitra, 60 miles east of the capital Bratislava, will build the aluminium-bodied Discovery SUV from the end of 2018. JLR is in talks with six suppliers to set up facilities in a park next to the Nitra plant, and has already signed a deal with Spanish metal parts maker Gestamp to build what in effect will be JLR’s press shop within the wider Nitra park. Other supplies will be sourced nearby, for example seats from Lear and painted outer skin parts from Plastic Ominium. It helps there’s an established network of suppliers for existing plants, and not just in Slovakia. Audi’s plant in Gyor, making the A3 saloon and TT sports car – is just 60 miles south of Nitra over Slovakia’s southern border into Hungary, for example. 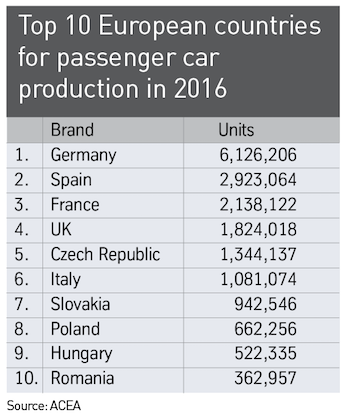 Poland to the north might have missed out on JLR’s investment but it secured its own plant operated by a premium automaker – a first for the country – when Mercedes owner Daimler agreed to build an engine factory there. Official construction began in June this year for the plant, which is based Jawor and will make “highly efficient” four-cylinder engines when production starts in in 2019. The €500m project is only Daimler’s second engine production site outside of Germany and follows its Beijing, China, facility.

Daimler is also expanding its plant in Kecskemét, Hungary, it announced last year. It will spend €1 billion to build both front wheel drive and rear wheel drive cars in a second facility that will be ready “before the end of the decade” the company said. The current plant has produced models in Mercedes’ front-wheel-drive A-class range of vehicles since opening in 2012 and operates as a mirror facility to Daimler’s Rastatt, Germany, plant. The second plant in Kecskemét will have a bodyshop, a paintshop, a final assembly and a supplier park, according to Daimler.

Back in Poland, VW Group’s new plant in Wrzesnia started production in April making MAN’s TGE van, a version of the VW Crafter, while in Romania Ford is upgrading its Craiova plant to build the EcoSport small SUV from autumn this year, the firm announced in April. This involves hiring a further 976 staff to supplement the 2,715 it already employs there both in assembly and at the attached engine plant, which builds the Ecoboost 1-litre petrol engine. Ford currently builds the EcoSport in India but switched to Craiova to boost production after the B-Max small MPV failed to inspire buyers in Europe.

Uncertainty over UK leaving the EUThe need to boost capacity in the East is partly driven by rising sales in Europe. Last year registrations of all vehicles rose 4.5% to 17m within the EU, accounting for 18% of the global total. Cars accounted 14.6m of those. This is now less than a million away from the high of 15.5m in 2007.

Among the big five markets, only the UK was down at minus 0.6%, attributed in part to negative economic sentiment and the reduced value of the pound in the aftermath of the country’s decision to leave the EU.

Those companies assembling cars in the UK, notably Nissan, Jaguar Land Rover, BMW (Mini and Rolls Royce), Toyota and Honda, as well as Ford as an engine maker there, will be closely following the recently started negotiations with the EU to determine what relationship between the two will emerge when the UK exits in 2019. Minefields abound, most obviously if the EU and UK can’t agree on a deal and World Trade Organisation tariffs of 10% on assembled cars are imposed instead, the so-called “hard Brexit”.

Daimler has started work on a second battery plant in Kamenz, near Dresden, Germany

The other big concern is increased hold-ups at borders if the UK leaves the customs union. A complex vehicle part might pass through 15 countries, and cross borders multiple times before completion, ACEA noted. Any changes to the high levels of integration UK current enjoys within the EU “will most certainly have an adverse impact on automobile manufacturers with operations in the EU or the UK, as well as on the European economy in general,” Erik Jonnaert, secretary general of ACEA, warned earlier this year.

The UK is Europe’s second largest car market, and an important one for particularly German manufacturers, and exports around half of all cars built there into the EU. Some manufacturers, e.g. Honda, which exports mainly to the US, have said export competitively has improved since the fall of the pound. However parts localisation in the UK is still relatively low at 44%, according to figures from the UK Automotive Council. However, that figure is an improvement from 36% from 2011.

The other big uncertainty in Europe is how the PSA Group’s purchase of Opel from GM, announced back in March, will play out in terms of factory closures. The deal was a shock on two counts. One, that GM had decided it didn’t want to compete in Europe any more and two, that PSA Group was confident enough after a brush with bankruptcy four or so years ago to buy a third brand competing in the same mass-market segment. A segment that GM was so pessimistic about in Europe that it bailed from it altogether.

Opel employs around 38,000 in Europe and operates nine plants operating at “a poor level of utilisation” according to Max Warburton, analyst at investment research firm Bernstein. “Ultimately it will need to cut capacity,” he said. “We are convinced PSA is planning – and will achieve – job cuts.” That won’t happen right away – political pressure in Germany, where Opel runs the Eisenach and Russelsheim plants, will make that difficult there, while the much improved Ellesmere Port plant in the UK has a deal to make the new Astra to 2021. It might even make sense to keep the UK plants if the pound value stays depressed, but the localisation rate at Ellesmere is one the UK’s poorest with only around a quarter of parts by value bought in the country.

What looks more secure is Opel’s plant in Zaragoza, Spain – the brand’s largest with 355,000 vehicles produced last year. The country is a powerhouse in terms of vehicle manufacturing thanks to its lower wages than northern Europe and solid supplier base. Spain made 2.9m vehicles in 2016, up from 2.3m in 2010. 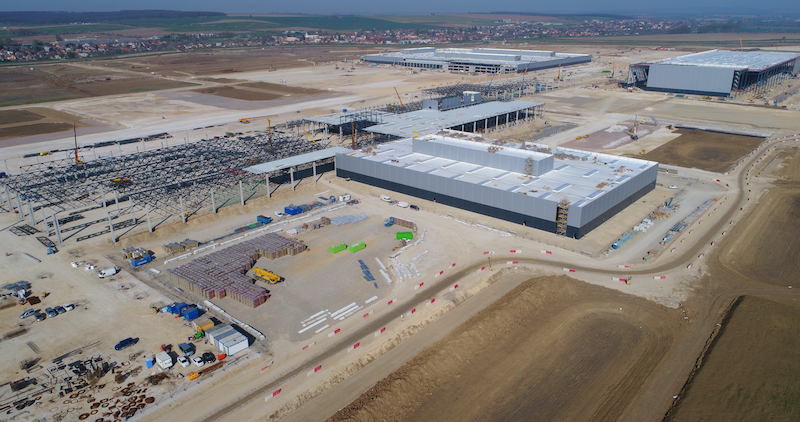 The electrification challengeLooming large over every manufacturing decision right now is the impact of new technology, particularly the issue of electric vehicles. The manufacturers themselves are making bold claims for the for the uptake of EVs – for example the VW Group, Europe’s biggest manufacturer, predicts a third of its vehicles it sells will be electric by 2025. Daimler has said up to a quarter will be EVs by the same date. This poses a problem for manufacturers: do they or don’t they make the battery cells? On one hand it’s not a core competency (“We are a car maker not a chemist,” Marianne Bataillon, Renault EV project leader said last year) but on the other hand if they do outsource production to the Koreans or Chinese, then that’s a big chunk of work that increasingly under-employed engine plant workers could be doing instead. Mercedes has taken the first step toward the solution: make the battery pack and surrounding control technology, but outsource cell production to whoever can make it cheapest.

To that end Daimler has started work on a second battery pack plant in Kamenz near Dresden in eastern Germany’s Saxony region. The plant will come on stream in mid-2018 and cost Daimler another €500m, it said. Cell production meanwhile is moving from Asia to eastern Europe. For example LG Chem is building a plant in Wroclaw, Poland, with a capacity of more than 100,000 batteries, while Samsung has built a battery facility in Goed, Hungary, that’s scheduled to start early 2018 with capacity to built batteries for up to 50,000 electric cars a year. Korea’s SK Innovation, a supplier to Daimler, is expected to also build a factory in eastern Europe, media reports said in May.

It’s clear that the challenges and cost of new technologies are forcing manufacturers to shift their business model to free up investment cash. Thomas Sedran, VW’s head of group strategy, said at the end of last year: “In our historical business model we had high vertical integration, but going forward we don’t think that may be the smartest way.”