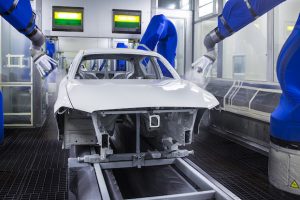 Construction work has started to extend and update both the bodyshop and paintshop. 500 new robots are being fitted to the bodyshop and adjustments are being made to the conveyor systems, while a second automated top-coat paint line and new pre-treatment system will be installed in the paintshop. Furthermore, a new panorama roof fitting system is being added to the assembly area, which is more flexible and faster than its predecessor.

"We have every faith in the skills and productivity of employees at our Leipzig plant," commented Oliver Zipse, BMW board member for production. "So it’s only logical that, with the measures we are introducing now, we should make the plant even more flexible and, above all, more efficient to keep it competitive in the future."

The expansion and upgrades are scheduled to finish in 2020, and are expected to increase annual production capacity by approximately 100,000 units. BMW expects to increase the number of i models made at the plant from around 130 to 200 units a day, reflecting growing demand for electrified vehicles.

Production of the i8 Roadster and updated i8 Coupe recently began at Leipzig, and in an interview with AMS, plant director Hans-Peter Kemser described the importance of readying plants for increasing demand in vehicle electrification.