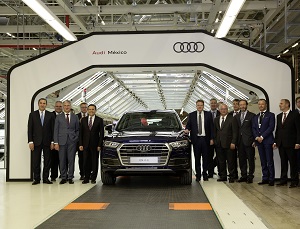 Mexico – The factory in the south-central state of Puebla will produce the Q5 SUV for all global markets except China, with an annual capacity of 150,000 vehicles. Audi’s investment in the site exceeds €1 billion ($1.1 billion) and has enabled it to become the first premium carmaker with manufacturing facilities in the country.

“The plant in Mexico is a milestone in the history of our company and an important step in our internationalisation,” stated Rupert Stadler, chairman of the board of management at Audi. “With this facility, we have established an important site for the export of our automobiles to customers all over the world.”

Audi San José Chiapa is a Smart Factory, mapped out digitally prior to construction to ensure an optimal footprint. The 350,000 sq.m plant consists of a press shop, bodyshop, painthshop and assembly hall, built on 4m sq.m of land in three-and-a-half years, a record for Audi. “The facility is the first that we have put into operation completely virtually, that is, in a computer simulation,” stated Hubert Waltl, board of management member for Production and Logistics as well as chairman of Audi México. “We have optimised the entire process chain and put the plant into operation 30% faster than is usual.”

The advanced technology at the plant includes 670 robots in the bodyshop, which has an automation level of 80%. Audi also believes that the servo press in its stamping shop, supplied by Schuler, is the largest in the Americas, at 11.9 metres tall, weighing 3,000 tons and with a total force of 81,000kN. In addition, Audi says that new equipment will enable “resource-efficient production”. The factory is claimed to have the most environmentally-friendly paintshop in North America, with 50% lower energy consumption, 80% recirculated air and zero wastewater. The workforce currently stands at 2,500 individuals, with a target of 4,200 by the end of 2016.

A just-in-sequence supplier park has also been established next to the vehicle plant, accommodating seven suppliers and logistics providers. Audi is sourcing 70% of parts from the North American Free Trade Agreement area and plans to increase this proportion in the long term. More than 100 companies in Mexico are already supplying Audi San José Chiapa.