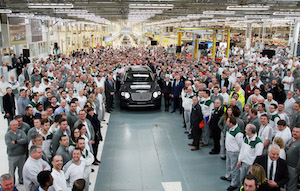 UK – The vehicle was handbuilt during 130 hours at the manufacturer’s Crewe plant, which will now begin full production. Deliveries will commence in January 2016.

The Bentayga is part of a £840m ($1.3 billion) investment programme which has seen the creation of 1,500 jobs plus new facilities at Crew, including a bodyshop, paintshop and assembly line. The £800m ploughed into the plant was supplemented by £9.5m from the UK Government’s Regional Growth Fund.

Wolfgang Dürheimer, chairman and CEO of Bentley Motors, hopes that the Bentayga will be “the benchmark against which all other SUVs are measured, defining a new segment – the luxury SUV”.

The first Bentayga will be kept in Bentley’s heritage collection.