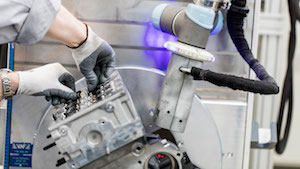 Germany - Volkswagen has recently established a new joint venture (JV) with a start-up called Wandelbots in a bid to establish test stations for collaborative robots at its Transparent Factory in Dresden. The idea is to use the co-bots during the final stages of electric Golf assembly, the production of which was recently doubled in order to meet rising demand.

The co-bots are different to those that are currently in use at several manufacturing facilities around the world as they are trained using an innovative sensor jackets worn by human workers. These sensors collect real-time data on the movements of the workers, which is then wirelessly transmitted to a software program and used to control the robots.

"This allows a robot to be taught a clearly defined task by way of example and imitation," explained Christian Piechnick, founder and managing director of Wandelbots. "The software running in the background is able to generate an automation process based on data from multiple training runs, and the robots are also capable of adapting independently to the individual requirements of their human colleagues."

VW currently uses co-bots at several of its sites across the world, including its Salzgitter and Wolfsburg plants in Germany and its plant in Uitenhage, South Africa.