The manufacturing industry is on the cusp of a revolution, where investment is led by software rather than hardware. That in turn enables a raft of new possibilities in creating the factory of the future, according to experts from Audi, ABB and Cosmo Tech.

Automotive manufacturing has experienced a number of technological sea changes over the past decades: the move from relay panels to PLCs (programmable logic controller), from ‘dumb’ buttons to HMIs for communicating with machines, and the widespread introduction of robots. Experts at last week’s AMS Livestream agreed that the next revolution will be a change from a hardware-defined production system to one that is software-defined.

Watch the full livestream with Audi, ABB and Cosmo Tech

“[We will be] thinking of functionalities as software building blocks, instead of buying a piece of hardware that supplies us with a certain functionality,” said Dr Henning Löser, head of Audi’s Production Lab. “We’re now moving down the same route that we did with data centres, and this is going to revolutionise automation.”

He added that there is some reluctance for a change like this, but that it would enable an exponential acceleration in Industry 4.0, because software is much easier to change and maintain than hardware.

Software is a driving force in many of ABB’s solutions, said Patrick Matthews, global powertrain group manager and VP of robotic systems. Thanks to virtual factory planning with the company’s ‘Robot Studio’ application, potential issues can be caught earlier, before any hardware has been produced or installed. Once everything is in place, there are massive amounts of data coming from the equipment, and machine learning can be used with this for ongoing maintenance.

Matthews gave the example that for certain specialised equipment, there were just a handful of experts who could troubleshoot it and had to travel around the world to do so. “What we’ve now done is redeploy those guys, had them look at some algorithms, add some more sensors to the machine, add some more devices onto those machines and connect them,” explained Matthews. “We built algorithms so that the machines will self-adjust, essentially having them do on the fly what our guys were going in to do.”

It’s a world of possibilities – 5G 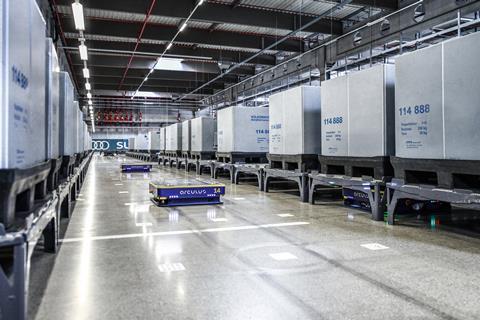 Audi AGV in a parts supermarket

At the Production Lab, Audi can try out and develop new production technologies and figure out whether they make a valuable contribution, but on a smaller scale and without the threat of stopping a production line if something goes wrong.

Audi has had a private 5G network at the Production Lab for a while and Löser said it has been a success for the guidance of AGVs, even if “it is one of those technologies everybody is talking about, especially those who want to sell us 5G, who tell us that 5G will just enable you to do everything.”

5G has proven its worth over wi-fi, as AGVs moving from one wi-fi access point to another can lose connection, data packages will be dropped without the system realising, and the AGV will stop at an inconvenient time. 5G is much more reliable.

Almost more important than the concrete application has been the opportunity to try 5G out and help define the standards for 5G. The telecom industry had been defining the standard for 5G so that more bandwidth would be reserved for downloads than for uploads, because that makes sense for consumers, when they stream video.

However, one of the benefits of 5G in industry is to send large amounts of data from equipment to data centres for analysis. In other words, upload speed is more important than download speed. Audi was able to give this feedback to the 3GPP standardisation, so that the eventual standards would work for them. “If we hadn’t tried it out, we wouldn’t have known what to tell them,” Löser summed up.

Read more about 5G in the latest AMS digital edition

As the pandemic has shown that companies lack visibility of their operations – which parts are failing and which are going to fail first in the future, AI for these data analytics has become more important. Full visibility and predictive algorithms, such as the hybrid AI and digital twins Cosmo Tech develops (see boxout), used to be a nice to have, said Michel Morvan, co-founder and executive chairman. 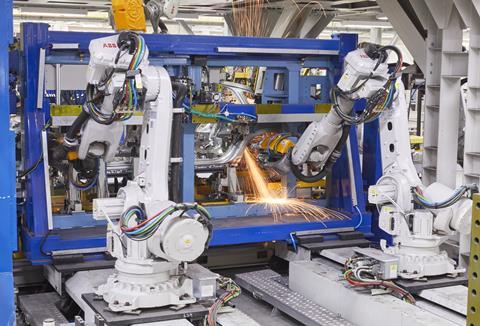 “What I observe now in our customers – not only in the automotive sector but there in particular – is that people realise that knowing the state of all their systems, having good data, having the possibility to visualise it is a question of life and death.”

The software revolution doesn’t just mean more software, it also entails looking at it in a different way. Particularly when it comes to data collection and analytics, software applications are going to come from different suppliers who are focusing on one particular specialism. According to Matthews, ‘applications’ can be thought of fairly literally, like phone apps that plug into a bigger system.

“You’re going to see a lot of apps be developed that can be put into systems that can look at particular things and analyse them, and give you insight or give you direction based on that data that it’s analysing,” he explained. “I don’t think that there is going to be one huge Cray supercomputer that’s going to analyse everything and tell you exactly what to do. I think it’s going to come in little steps.”

Digital twin is a term that gets used a lot, but it can mean anything from a single component or machine with a 3D representation that is updated in real-time, to a whole organisation – one or multiple plants – that is simulated, not necessarily with a visualisation. That digital organisation can then be used for further simulations.

It is then possible to simulate what would happen in certain situations, such as severe supply chain disruption. Simulations can also help to optimise a sequence of decisions in the presence of a big uncertainty. Thousands of simulations can be run to find out what the best course of action is.

According to Morvan, it is possible to take this one step further and end up at ‘hybrid AI’ where a neural network can learn from data from the past, make simulations, and then learn from the simulation, creating a positive loop to better anticipate potential situations in the future.

While such a multitude of apps makes sense, they do need to work together properly. Löser warned that the industry faces a challenge to find a platform to orchestrate all the different pieces of software from different vendors and make sure they are all up to date. For instance, if one piece of equipment starts updating twice a day, that may cause problems when the rest of the system hasn’t adapted yet.

“It’s clear that we need some kind of open platform that everybody can build their bits and pieces on, so that the entire factory can play together smoothly like a well-tuned orchestra.”

Morvan agreed that there will be little steps that need to be united in big leaps, adding that connections to other apps are an important part of developing Cosmo Tech’s software. He also said: “You need something that is customisable, but also is kind of generic so that you can go fast, because you cannot reinvent the wheel every time you have a problem in a plant so that’s exactly this in-between that we have to find.”

An essential component to enabling this customisability for individual plants or applications are common, open standards, Löser predicts, in order that everybody can develop towards these standards, and make it easy to plug all the apps together and to allow for the unique character of the individual plants.

Once a suitable platform is found or developed, there are further benefits in the flexibility it enables. “With the transition to an orchestration platform, all of a sudden, we are not locked into one specific supplier anymore in the plants. Instead, we can open it up and make it easier for new software solutions to find their way into our production systems,” said Löser. What’s more, such a system will allow the software to be updated continually, adding features that no-one can even imagine today.

For ABB, the factory of the future is modular, with a cellular approach, where a number of parallel standard cells are connected either by an AGV or a conveyor, but working as more or less standalone units.

In this situation, if one station goes offline or needs maintenance, the system can still produce, albeit at a slower rate. It also means that stations can be added, removed or retooled without any major disruptions to production. That means it is no longer necessary to wait for a shutdown period and go in with an army of people under time pressure.

“Instead, we can do some stuff on the weekends to hook in some things that are critical to the current process, but then work on it during the week while the rest of the line is running,” explained Matthews. “It gives it that flexibility and scalability, and it also allows our customers to redeploy those stations or assets to either other production lines in the same plant, or even in different facilities or different countries.” 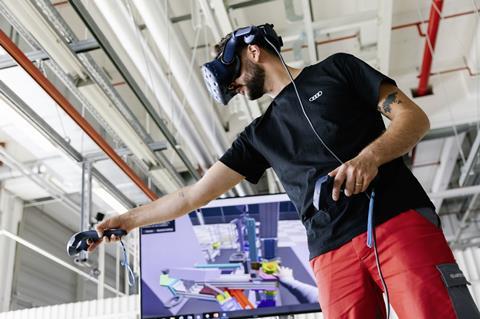 One of the success stories of Audi’s Production Lab is the use of VR in production planning. Löser said that Audi has been working with virtual reality for a while, but realised that it currently has no real use on the production line. On the other hand, it has proven very useful for 3P (production preparation process) workshops. Since CAD data for the cars and the line is available, these workshops can be held before physical prototypes of the cars are available.

He doesn’t think they are a straight replacement for holding these sessions in the real world, because there are still some things that the AR cannot quite replicate, but a hybrid approach is likely ideal. The project has been such a success that it will also be used in some VW plants.