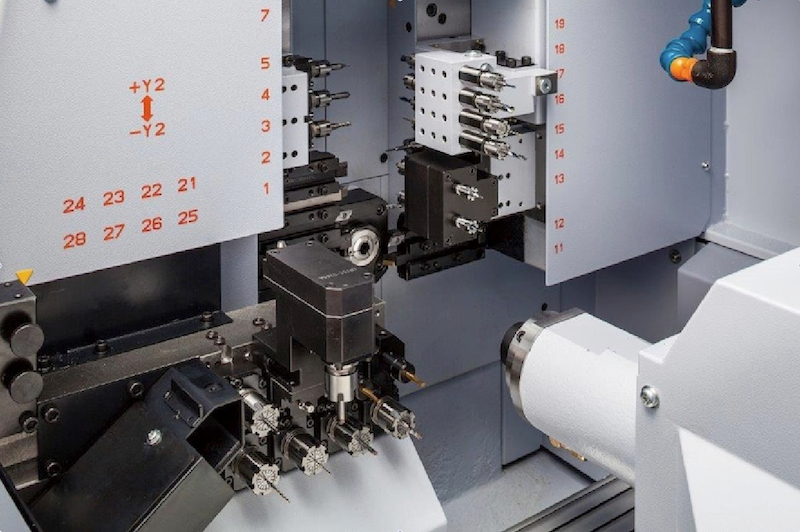 Automotive turning shops face numerous market demands, with piece-part price heading the pack. Automatic-lathe manufacturers have been well aware of customer requirements for many years and many now offer both single-spindle and multi-spindle versions. So, which to choose?

Additionally, many single-spindle sliding head automatics are fitted with a counter-spindle, in effect making it a dual-spindle lathe. Before separating the part from the bar, the part is picked up by the counter-spindle fitted with its own tooling, which then finishes off the part by back-operation machining. All components leaving the machine are therefore complete.

24/7 machining
Among the many advocates of this technology is Bienne, Switzerland-based Polydec, which is home to no fewer than 50 automatic turning machines, including a number of Tornos Deco and EvoDeco models.

The company has its machines in production 24/7, manufacturing a variety of components that include an annual production of over 250m micro-axles for use in automotive dashboards, supplying five out of every ten produced globally. Polydec also manufactures turned parts for diesel injection systems.

Many such parts are produced by Polydec on Tornos Deco sliding-head automatics with nine axes. However, the latest arrival, an EvoDeco 10, offers no fewer than ten linear axes, two C axes, four independent tool systems, a sub-spindle and 27 tools (up to 21 rotating). There is also the option to work with or without a guide bush, a feature that can cut material costs by reducing bar remnant length.

Of course, Tornos is not alone in delivering new sliding-head lathe developments to the market. Star Micronics, for instance, has recently released its SW-12RII. The machine’s two independently-controlled, gang-type toolposts work in unison to carry out simultaneous machining, and accommodate various tool units to suit complex machining demands. Rear-end machining is further improved by the toolpost’s eight-spindle unit with Y-axis control function. Again, the SW-12RII is switchable from guide-bush to non-guide bush system.

With the 15,000rpm main and counter spindles, and 29 tool positions, as well as many devices for operations like thread whirling, angular hole drilling, polygon processing and hobbing, the SW-12RII appears to suit a broad range of complex machining requirements.

Multi-spindle options
The presence of six to eight main spindles clearly means that one lathe can machine six or eight parts simultaneously. However, the multi-spindle lathe is typically one with a fixed headstock, thereby making it pre-destined to produce relatively short parts. With its axes arranged in X and Y, and its facilities of machining from the front, the multi-spindle automatic is a high-output machine.

In most multi-spindle lathe configurations, a counter-spindle picks up the part from the last spindle before it becomes an independent component. As the counter-spindle has tooling in the X, Y and Z positions on the lathe, back-operations can be executed, thereby providing the operator with a wide choice with regard to machining the end of the part and completing it without further handling.

"Many of the parts have complex geometries and materials that are very challenging to machine, with tolerances of ±10µm and below”
– Mike Clay, Autocam

Able to provide testimony to the benefits of multi-spindle automatics is Autocam, based at Kentwood, Michigan, a specialist in turning fuel system components, as well as braking, transmission and other automotive parts.

“We provide the majority of our products into advanced fuel systems such as GDI [gasoline direct injection] and high-pressure diesel,” says Mike Clay, technical and quality director. “Many of the parts have complex geometries and materials that are very challenging to machine, with tolerances of ±10 µm and below.”

Calculating the cost
When Autocam was looking to add two more twin-spindle machines to increase production on a GDI engine pump component, the company also decided to consider the Tornos MultiSwiss multi-spindle machine. The thinking was: “If we can do it on one machine for roughly the same manufacturing cost as several single-spindle machines, it’s a better process for us and for our customer".

The purchase price of one MultiSwiss was higher than two additional twin-spindle machines, but Autocam thought the ROI on the MultiSwiss looked promising. The fact that the parts do not have to travel from machine to machine to complete all the necessary operations but instead stay on the MultiSwiss – where turning, drilling and milling are done in six sequential spindle stations with up to three tools per position – means that Autocam has a leaner process with reduced chance of part damage.

Machining complex parts
Since acquiring the MultiSwiss, Autocam has been enjoying the benefits of six-spindle machining, even on relatively complex parts. For instance, one particular fuel-injection part requires turning, drilling and milling operations on 440C material with a diameter of 7.3mm and 24mm length. Tolerances on the part are ±30µm on length and ±20µm on diameter, thus pushing the length-to-diameter limits of machining.

“There has been a huge learning curve for the industry on manufacturing GDI components because the material is more difficult to machine at high volume with extremely tight tolerances,” says Clay. “The surface condition is much more critical because injectors are going right into the cylinder. On the pump side, the clearances are smaller and the fit of the parts is substantially tighter. So any damage is detrimental to the pump. That whole technology shift over the past few years has really driven process development on all the machines at Autocam. We expect the same results from the MultiSwiss in the future – for the next generation of components.” 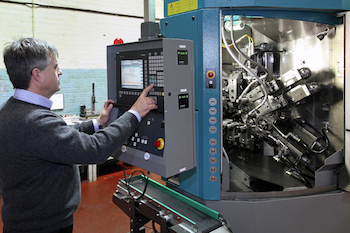 Another company benefiting from recently acquired multi-spindle automatic technology is Northampton, UK-based Auto Turned Products (ATP), which has ordered a second Index six-spindle CNC automatic turning machine to cope with increased demand from the automotive sector. The company specialises in turned parts for vehicle builders such as Jaguar Land Rover, as well as luxury marques like Rolls-Royce, Bentley and Aston Martin.

The first Index multi-spindle, for producing parts from bar up to 32mm diameter, was installed in 2012. It has the production capacity of four single-spindle CNC lathes but in a much smaller footprint, and needs only one setter/operator. The new machine will be a larger MS40 model, with 40mm bar capacity.

CNC production engineer Vic Pais says: “Before we bought the first multi-spindle, I read an article about a UK subcontractor that runs four similar machines with just one operator. I thought it was a publicity stunt, but it’s true, despite their apparent complexity. Each machine offers the production capacity of three to four CNC twin-opposed-spindle turning centres, so one operator can preside over production output that is equivalent to that of 12-16 lathes. It would require four operators to run that number of sliding-head or fixed-head bar automatics, added to which the machines would occupy much more space on the shopfloor, and consume more power.”

Longer tool life
While reduced labour cost is one compelling reason for investing in multi-spindle technology, another is prolonged tool life – in some instances by a factor of ten. For example, an £11 end mill lasts for 2,000 components when machining steel components on a sliding-head lathe at ATP. However, the same tool can cut 21,000 parts on the multi-spindle automatic. Pais says tool longevity is partly a result of 80 bar through-tool coolant (with particle filtration to 20µm) and partly down to the rigidity and vibration resistance of the multi-spindle compared with lighter sliding-head machines.

Cycle times are shorter, too. Compared with machining an EN1A leaded-steel part on a CNC sliding head, the six-spindle multi delivers it in less than a third of the time. In another example, an EN16T steel component requires a run time on the MS32 that is 77% shorter than the cycle time on another make of sliding head. 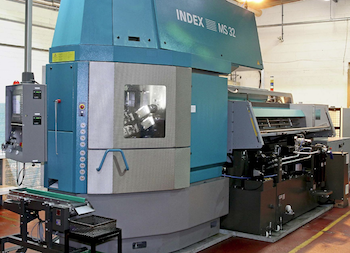 Based on savings in the three key areas of cycle time, tooling and labour, when comparing a twin-opposed-spindle CNC lathe with the multi-spindle automatic, ATP calculates that the MS32 has paid for itself in two years, based on running 80 hours a week. “The multi can produce large numbers of components in a short space of time,” says Pais. “The only problem we have is feeding the 3.2-metre bar or tube into the Iemca magazine quickly enough. The machine simply eats stock, particularly when a relatively simple part is coming out every few seconds.”

That said, installing a CNC multi involves a change of mindset due to the overall investment required. Pais says that changing over the multi for new work can take up to half a day if a new size of bar is involved. However, the machine is back in production in minutes if it is a repeat job from bar of a similar size.

So, in conclusion, what system should be chosen – a multi- or single-spindle automatic? Well, in the majority of cases, the choice is governed by the geometry of the part, the required output and the investment potential.