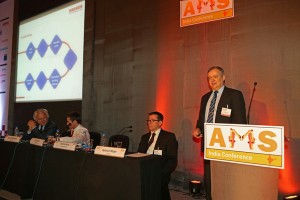 In December 2013 the AMS conference returned to Pune in India. A gathering of over 250 OEMs, Tier and equipment suppliers attended the event to discuss the challenges and progress in the Indian automotive market. Click here to read the full report.

Presentations from the principal sessions of the recent AMS India conference were streamed live, and recordings can now be viewed by readers who weren't able to attend the event itself.

AMS India gathered around 250 OEMs, tier suppliers, equipment providers and consultants in Pune on December 10-11. The conference featured two days of presentations and discussions, with video captured from plenary sessions on overall strategy, tier supplier development and final assembly, as well as from special break-out sessions on paintshop, drivetrain, BIW and truck and bus production.

A cocktail reception opened the event itself, with other networking during coffee and lunch breaks, and during a mid-conference gala dinner. The conference was preceded by a visit to Fiat's plant at Ranjangoan, which makes models including the Linea, Grande Punto and Indica Vista, as well as the Tata Manza.  The facility also makes the Multijet diels and Fire gasoline engines.

Other AMS activities which are streamed online include a full series of specialist webinars - 12 this year, the most recent from Comau on powertrain thermal spray coating solutions.