No other application in automotive production is, or will ever be, as robot-intensive as welding. In 2000, AMS reported that both GM and Ford were purchasing robots in their hundreds for the production of the new Corsa and Fiesta.

All were to be used in the body-in-white process.

In 1998-‘99, worldwide orders for robots across all industries grew by 20%. Statistics from the United Nations Economic Commission for Europe, in collaboration with the International Federation for Robotics, noted a 60% increase in order numbers in the US, while Europe saw a more modest 12% increase. Growth in the automotive sector was higher than the general trend, with robot sales up 24% on the previous 12 months.

Price, in combination with the cost of not automating areas of production, was one of the primary reasons for increased market growth. In the US, robot prices fell 40% during the 1990s, while labour costs increased by more than 30%. This, while the US and Europe both experienced significant shortages in skilled labour.

A direct result of this was the expansion of robots into new areas of application. One area to see significant automation in assembly was the glazing cell, where robots apply primer and sealant before vision systems advise on alignment and placement of front and rear glass. There was also a growth in the use of robots to fit seats and instrument panels. 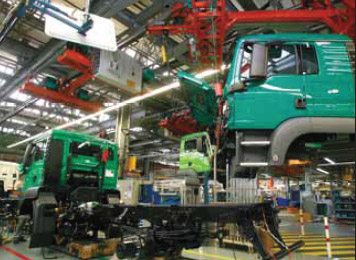 Machining is another area where the use of robots saw exponential growth. As tolerance levels tightened, the measurable, repeatable quality of robotically-produced parts came to be the standard.

At Peugeot, for example, Tricept robots produced by Swedish firm Neos were used for powertrain machining. All machining (except bores) were completed by this equipment and, since the robots could be put in place before the components had even been signed off, Peugeot was able to release its model three months ahead of schedule.

The early 2000s saw the first use of ‘intelligent’ robots to sort, arrange and line up parts in assembly processes. US robotics producer Adept was putting the finishing touches to its vision assisted parts delivery system, named Rapid. It was used to speed up the rate at which the robot could pick parts arriving on a conveyor in random orientation, and the company claimed a feed rate of up to 60 parts per minute.

While the first generation of Rapid incorporated just one camera to guide the robot pickup tool, the second generation used two, the first camera arranging the so-called ‘hopelessly’ orientated parts (an impulse head, located under the conveyor actually moved the parts), with the second used for pickup. This allowed a further improvement in feed rates.

Other robots were developing ‘senses’. Fanuc’s latest at the time was the Intelligent ‘I’ series of six-axis machines, designed specifically for handling and assembly operations and featuring force, torque and vision sensing technologies. “Many of the jobs that have not been automated yet rely on the operator for his sight and touch senses,” commented Michael Knaf, General Manager at Fanuc Robotics Deutschland. “These are now senses that are available on the robots.”

While standalone robots have been around for some decades now, manipulation robots designed to assist assembly line workers have been a relatively recent additions. In 2002, AMS reported on one of the first, developed by Fanuc Robotics North America, for the fitting of fully-assembled dashboards. Adding to the complexity was the fact that installation was while the line was moving.

Developed for a US pickup manufacturer, the manager of the company’s vision department, Ed Roney, explained that the system, called an Individual Assist Device (IAD), solved the challenge by keeping track of the how the vehicle was moving and providing boundaries so that there are no collisions. At the time, Roney noted that the system is ‘a little touchy’ as it sought to process the measurement data needed as the module was inserted into the vehicle.

But the cost of complex equipment was still justified, said Roney. “The more complete the panel, the less operations are needed to assemble it.”

Though partial automation solutions are generally considered as robot-assisting-worker, they can also apply to a human assisting a robot to complete a semi-automated task. For example, Kuka’s Safe Robot technology provided robot control via a joystick. The robot lacked vision and other feedback capabilities, with the human colleague supplying analysis of the weld or other job.

Explained Kevin Kozuszek, Director of Marketing at Kuka: “If you’re welding a complex or unique part or compound together, a person’s eyes are going to provide a better measure of whether it’s a good weld or not. You can have a camera look at it, but if you have someone there…(that) person will know if it’s good or not.”

What goes up must come down

Even before the economic upheaval of 2008-9, sales of automation equipment had either levelled off or were falling in key areas of automotive production. Figures released in late 2007 from the International Federation of Robotics indicated that from 2005-06 purchases of robotics worldwide fell some 20% to (approx.) 20,000 units. Areas losing sales were primarily the US, Japan and Europe (with the exception of Germany and Italy), while Korea and China either maintained sales or showed slowing growth.

The type of robotics being purchased was also changing. Rather than ‘hard’ automation via dedicated installations carrying out fixed procedures, flexible and reprogrammable robotic cells came to the forefront.

Mark Schlanker, Business Manager for DV Automation, noted that he expected formal proof of re-usability to become an integral part of the purchase process for new installations. The robot itself would require a combination of re-programmability and ease of retooling, and he predicted greater importance for simulation systems able to demonstrate the re-use of the cell before it was commissioned. 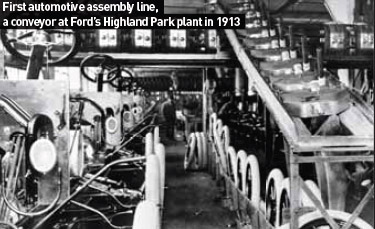 While the range of robotic reach and lift is steadily improving year-on-year, the conveyors needed to present parts and car bodies to robots are playing an increasingly vital role.

Early issues of AMS noted that US carmakers were particularly interested in sourcing conveyor equipment similar to that used in European plants, for reasons of improved ergonomics and equipment flexibility. The US conveyor industry first responded by forming partnerships with the existing companies, and quickly followed by making their own similar products.

One such company was MW, which supplied a skillet system to the then DaimlerChrysler plant in Sterling Heights, Michigan. The skillet designs were based on designs by French company Cinetic, though the technology transfer wasn’t all one way since the French gained designs for power-and-free conveyors.

Wes Paisley, President of DMW, also added: “OEMs in Europe are asking their suppliers for more and more project management services, and full-service agreements, which is something we’ve been doing for 40 years. We are, for example, providing project management training to Cinetic for contracts they have with Peugeot in France.”

Modern robots may have largely made the jump from single to multi-function machines; conveyors are now going through this fundamental shift. Noel Dehne, responsible for the automotive branch of US-based conveyor manufacturer Jervis B. Webb, noted in 2008 that while conveyors have an intrinsic degree of reconfiguration potential, the products have remained largely unchanged in purpose since the 1930s. There is simply no reason for them to adapt.

But one company that has challenged the idea of the fixed conveyor system is German equipment supplier Dürr, makers of the FAStplant system. Its system is based on three standardized, pre-assembled modules that can be linked together to create an assembly line. Each module consists of exterior steelwork, an overhead conveyor with vertically adjustable hangers, and FASmotion, providing non-contact power and data transfer, together with lighting and control elements.

The modules are further equipped with items to suit the requirements of the individual workstation.

Benefits of the FAStplant system include the ability to build or reposition assembly lines within a few days, says Dürr, while production capacity can be quickly altered. Even the relocation of the line to a new production location becomes a commercially viable option, says the company.

Its a long step from the conveyors of old that lived and died in the buildings in which they were originally installed.