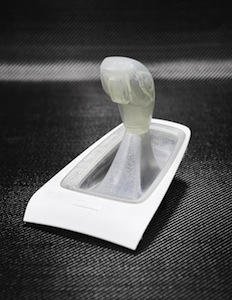 US – In celebrating the 25-year anniversary of the technology, the OEM said it has “played a key role” in the development of three well-known models: the GT, the Mondeo Vignale and the Focus RS. Also used on other Ford vehicles, 3D printing speeds up part prototyping, enabling designers and engineers to more easily test and refine different approaches.

Conventional prototyping is not only time-consuming but requires special tools. By contrast, 3D printing can produce a part in just a few hours and at low cost – as little as £750 ($1,135), says Ford – and therefore facilitates innovation and radical design. In 1988, the OEM bought the third 3D printing machine ever made, and has since produced over 500,000 parts. The milestone component was an engine cover for the new Ford Mustang.

For the GT supercar, Ford’s designers used 3D printing to create the F1-style steering wheel with integrated driver controls, plus the transmission paddle-shift controls. Engineers also printed lightweight structural components for the upward-swinging doors. On the racecar version, the technology assisted the development of the intake manifold for the EcoBoost engine.

For the Mondeo Vignale, Ford used 3D printing for the development of the hexagonal design of the upper front grille; the badges and exterior ornamentation, cut from nylon; and the nickel alloy wheels, plus the chrome exhausts with aluminium surrounds.

Furthermore, Ford is collaborating with Carbon3D in the US for the research of future rapid prototyping and small manufacturing programme capabilities. The partnership is developing 3D-printing resins capable of supporting the loads, high temperatures and severe vibrations involved in vehicle testing.

One line of investigation is Continuous Liquid Interface Production (CLIP), a technology used in the film industry to create special effects. This method grows parts from UV-curable resins and is 25-100 times faster than previous 3D printing processes. Ford’s designers have used CLIP to produce small interior parts for the Ford Focus Electric and Transit Connect.

“Incredible as it is that 3D printing has been around for more than 25 years, it is a technology that is moving more quickly than ever before, opening up new ways of manufacturing the cars of the future,” commented Sandro Piroddi, Rapid Technology supervisor at Ford of Europe.