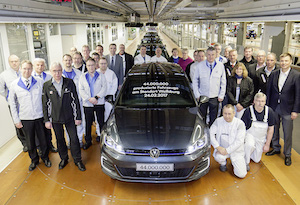 Germany – The record vehicle, a Golf GTE, rolled off the assembly line 72 years after production began at the OEM’s main plant. The highest-volume models in its history are the Golf, at 18m units, and the Beetle, with 12m produced up to 1975.

Plant manager Stefan Loth described the milestone as “a strong signal for Volkswagen in Wolfsburg”. Jürgen Hildebrandt of the Works Council said the factory has been so successful because “our colleagues are well qualified, with considerable experience, and the team spirit is right”.

Wolfsburg currently manufactures the Golf, Golf Sportsvan, Touran and Tiguan series, including electric vehicles (EVs). The plant turns out more EVs than any other VW facility, with almost 70,000 e-Golfs and Golf GTEs made since the production launch in 2014.

The factory also produces components, focusing on plastics and chassis, and is an internal system supplier for the Group; as well as Wolfsburg, the parts go to VW, Audi, Seat and Skoda plants across the world.