A veteran of vehicle production in the country, VW is nonetheless still expanding at Puebla – adding a new bodyshop for the Golf last year and another for the Tiguan that will open in 2017. AMS went to look around 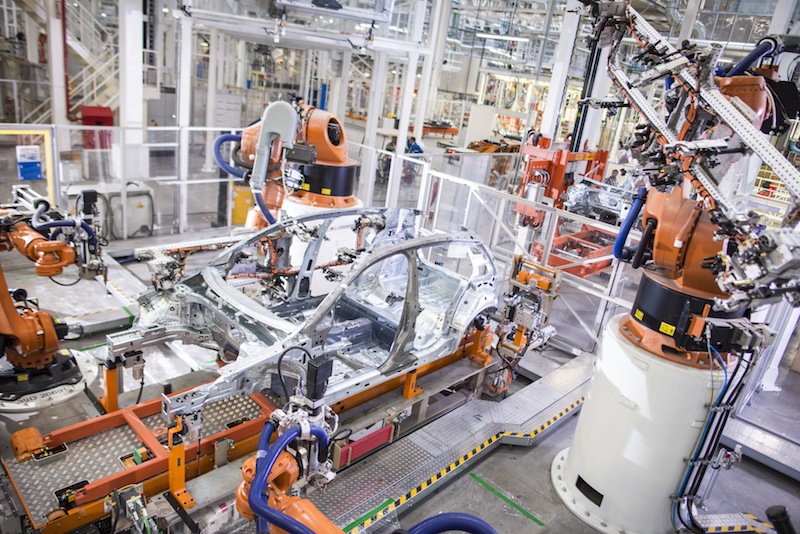 At 550,000 sq.m on 3m sq.m of land, VW Puebla is second in size only to Nissan Aguascalientes within Mexico, but this expansive manufacturing complex is set to get even bigger with an investment of $1 billion that was announced in March this year to build and equip a 90,000 sq.m bodyshop for the new Tiguan SUV. From an installed capacity of 500 units per day, the facility will supply the Americas and other markets around the world, excluding the EU and China. VW has stated that there will be a “high level” of automation in the bodyshop, with “advanced programming and control systems” – making it similar to the Golf 7 bodyshop that was opened last year at a cost of $700m.

The move is part of VW’s localisation strategy for production, which Michael Horn, president and CEO of VW Group of America, described as “key to safeguarding our competitive position on the global market”, noting that it will improve access to the US market. “With production of the Golf A7 and the Tiguan now moved to Puebla, we will build approximately 90% of our products in the NAFTA region,” he said.

However, unlike other global OEMs which are only now moving to take advantage of Mexico’s free-trade agreements, low-cost labour and proximity to the US, VW has had a manufacturing presence in the country for no fewer than five decades, investing around $10 billion since 1964 (see timeline below).

While the Beetle and Jetta have their own bodyshops (and assembly halls), the new Golf 7 bodyshop is the outstanding facility. Illuminated by natural lighting, it covers 49,000 sq.m (with space to store 2,500 bodies) and is equipped with 800 robots, mostly from Kuka; the automation level is 80%. The bodyshop is fed by the nearby, 6,048 sq.m press shop which is automated by two Mueller Weingarten presses stamping steel from Germany, Japan and Korea at a rate of 16 pieces per minute. Most of the joining that takes place in the bodyshop is spot welding, but adhesives and laser welding are used for the side bodies. Sensors measure the dimensions of the joined bodies but the final check is completed by workers operating under strip lighting; the total bodyshop workforce is 795. The cars then go to the paintshop, which is almost fully automated with Dürr robots.

Production at VW Puebla is supported by 20 companies providing just-in-time services from the nearby supplier park
In the 48,000 sq.m assembly hall for the Golf, which was opened in 2012 and is staffed by 833 personnel, suppliers deliver parts to an area known as ‘the supermarket’, including cockpits from SAS Automotive Systems, seats from Johnson Controls and tyres from Norm – three of 20 companies which provide just-in-time services from the supplier park that was established in 1994.

VW now has around 250 suppliers in Mexico, more than 50 within a 50km radius of the plant, and last year the OEM sourced around 70% of its purchasing volume from within North America.

All the parts that are received in the hall are transferred to a midpoint between the delivery area and final assembly, mostly by electric, manually guided vehicles. Assembly then follows the Kanban philosophy, with each station keeping a pair of component containers at all times, one full and one empty.

Puebla produces engine parts at its own foundry and assembles 2.0-litre and 2.5-litre engines for the Jetta, but also receives 1.8-litre and 2.0-litre units for the Golf and Beetle from the 330,000-capacity engine plant at Silao in Guanajuato, which opened in January 2013 at a cost of $550m (and also supplies VW’s Chattanooga plant in Tennessee). In the assembly hall, the engines are raised to meet the bodies, with a tolerance tinier than a hair.

All of the vehicles completed at Puebla are track-tested for the full range of characteristics, including noise, brakes, electronics and water, before exiting the site. Exports to the US leave by train on a daily basis, others are sent to the ports for overseas distribution and a small proportion, just 15%, are transported by truck for the local market. Puebla is currently producing 2,150 units per day – but with the addition of the new Tiguan bodyshop to supply the popular SUV market in the US, that number will surely rise.

1998: $1.5 billion invested for new Beetle, built exclusively at Puebla and exported worldwide; old and new models both assembled until 2003 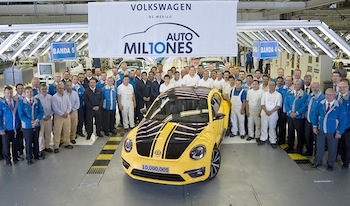