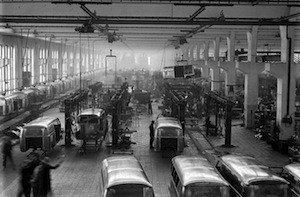 Germany – Production of the Transporter began 65 years ago at Wolfsburg, then at Hanover from 1956. A total of 11m T-series vehicles have now been made worldwide, and the new-generation model, the T6, will launch later this year.

The Transporter was designed to take the engine and axles of a Beetle, but instead of a central tubular frame it had a unitised body mounted on a ladder frame. The 1.1-litre engine produced 18kW (24.5PS) at 3,300rpm, while the payload was around 750kg. Production began in Hall 1 at Wolfsburg in 1950, at the rate of ten units per day. By the end of the year, VW had built 8,001 Transporters.

The 100,000-unit milestone came four years later, when there were 30 different versions. Daily production stood at 80 vehicles, limited by manufacture of the Beetle. In 1955, VW began constructing a new plant at Hannover-Stöcken, where the first Transporters rolled off the line in 1956. The plant now also produces the Amarok pick-up and the workforce has grown to 12,200 individuals.

Today, Transporters are also made at Poznan in Poland, which additionally makes the Caddy.