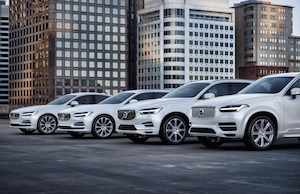 Sweden – The vehicle-maker declared “the historic end of cars that only have an internal combustion engine (ICE)” with the decision to fit an electric motor to every model launched from 2019 onwards, which will include full electric vehicles (EVs), plug-in hybrids and “mild” hybrids. The OEM said it was “placing electrification at the core of its future business”.

“Volvo Cars has stated that it plans to have sold a total of 1m electrified cars by 2025,” commented Håken Samuelsson, the OEM’s president and CEO. “When we said it, we meant it. This is how we are going to do it.” He noted the increasing demand for electrified cars, saying that Volvo will meet customers’ needs.

The company will launch five EVs between 2019 and 2021, three for Volvo and two for Polestar, its high-performance brand. Details of these models will be released at a later date, said Volvo. Additionally, there will be a range of petrol and diesel plug-in hybrid and mild hybrid 48-volt options for all models, which the OEM believes will be “one of the broadest electrified car offerings of any carmaker”. ICE models will gradually be phased out.

The announcement is part of Volvo’s commitment to minimising its environmental impact, encompassing both its products and its production. The company aims to have “climate-neutral” manufacturing operations by 2025.