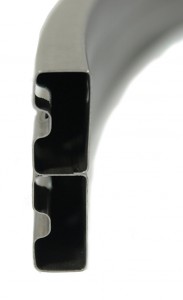 Ultra-high strength steel is an established material in the automotive industry and is commonly used in selected structural body reinforcements, bumper reinforcements, door impact beams as well as seat frames and mechanisms. Ultra-high strength steel is responsible for helping to achieve five-star crash ratings and reducing component weight by up to 40%. It also allows OEMs to cut costs and become more efficient in production, while developing more innovative components that are more competitive on the market. Despite the benefits, many OEMs are still choosing softer grades of steel and missing out on a competitive advantage. The reason is that they are relying solely on the elongation results of tensile tests when thinking about formability.

“The tensile test is the most frequently used test,” explains Professor Lars Troive, senior specialist for forming at SSAB. “The idea is to pull the specimen apart, until fracture. Then you measure how much it has extended in length. This is considered its elongation. For example, if the test piece measures 80mm and then becomes 88mm before cracking, it represents a 10% elongation.”

Locally 20% strain — what happens over 2mm, in percentage terms, is much greater compared with an average of 80mm like during the tensile test

“While this has long been the most common test for judging the formability of steel, modern, stronger steel grades are not correctly represented by this method.”

A more accurate way of predicting the behaviour of ultra-high strength steel is through the creation of a forming limit diagram (FLD), also known as a forming limit curve. One single FLD provides a graphical description of several material failure tests performed, ie punched dome tests, using different specimen geometries. Each specimen has a unique width-to-length ratio resulting in different deformation modes until failure. They will deform differently having their own strain-path.

Before tests, each specimen is prepared with a square-grid pattern that will be deformed equal to the material.After the tests, the deformed grid is measured on every sample at the regions for failures, giving two values each, the main and minor strain. Finally, the FLD is composed as a line between all of the values of strains obtained. This line represents the forming limit at which failure begins, depending on the history of strain-path.

In other words, the formability test determines how far you can go when forming before the material will crack, depending on the strain state and which way the material is deformed. Evidence that ultra-high strength steel can be formed far beyond what the elongation values are showing, is found when looking at drawn cups (see Figure 1).

This explains why there is such a big difference between the data on how much one can form the material. Most often, the forming over 80 mm is not as interesting, rather just a few millimeters in area.“I would say there is a big difference, especially when it comes to high strength steel,” says Troive.

Interpreting an FLDSince an FLD provides the most accurate data on how a specific grade of ultra high strength steel can be formed, understanding how to interpret the results is crucial. Today, finite-element simulations of the forming process have become very commonly used within the industry. Based on this, the FLD is a very important tool as it is able to read out if calculated strains are in the region or close to failure. The FLD can be divided into three parts: equibiaxal to the right; plan strain at the center; pure shear (drawing) in the left.

SSAB’s manager for forming and machining technology Thomas Müller explains: “The diagram attempts to provide a graphical description of a number of material failure tests with different strain paths. Basically, the area below the forming limit curve is considered to be safe for forming operations. It is common to lower the curve somewhat in order to have a margin for possible scatter during the stamping process or material properties. FLD’s are widely used as fracture criteria for forming simulations or strain measurements.”

“However, there are a few cases where the FLD is not able to predict failure. One of them is cut edges. The ductility of cut edges depends a lot on how the blank was cut, for example, the right cutting clearance, sharp tools, etc. In such a case, we instead rely on a practical test and compare results with the strain level on the edge, says Müller”

Different types of shapes and forming will force the material to deform in different ways. In general, the worst scenario is when a part is formed at pure plain strain condition. Simple bending is an example of this type of forming operation, giving the shortest strain-path to failure. Sometimes it is possible to change a strain-path. One way can be as simple as optimising the blank of geometry, preventing the material to get stacked, by that changing to be a preferable case with drawing instead for stretching.

One good example is a recent roll formed bumper reinforcement that represents a cost effective manufacturing method. This bumper was made in a martensitic steel grade Docol 1500 M from SSAB and is said to have the same weight as an equivalent aluminum bumper reinforcement, with a considerable cost advantage. 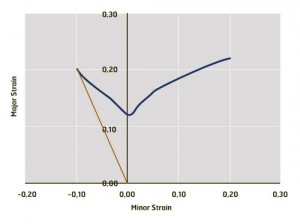 Additional benefitsBesides higher crash performance and weight reduction, ultra high strength steel can supply other valuable advantages. One of them is cost-efficiency. As a cold forming steel, less energy is needed for trimming processes than with hot stamped boron steel. Furthermore, ultra high strength steels are more cost-effective than other lightweight materials. The unique strength and technical properties of ultra high strength steel allow OEMs to reduce the amount of material needed for manufacturing an application by utilising thinner dimensions. At the same time, conventional production equipment can be used in production. This combination not only makes production more efficient, but also increases the number of parts that can be produced as opposed to other steel grades.

When choosing ultra high strength steel for automotive applications, the possibilities for innovation are great. However, relying only on elongation data from tensile test when judging formability will lead to choosing softer steel and missed opportunities. Instead, look to the forming limit diagram to ensure that you are getting the most out of your choice of ultra high strength steel.