Villaverde: To blossom with Cactus? 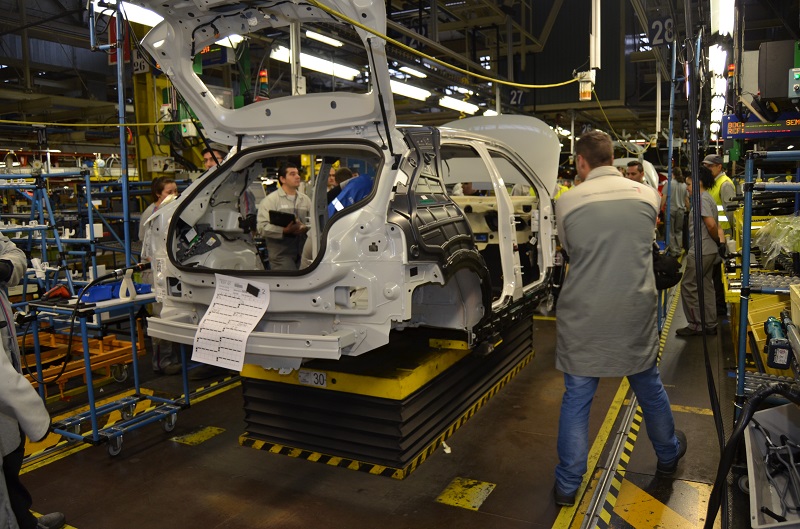 In 2012, PSA Villaverde was in desperate need of new product. The Madrid plant had built several generations of small cars for PSA, but Peugeot 207 hatchback manufacture was being wound down and only the Peugeot 207 CC convertible remained in production. With the latter also set to be discontinued in 2015, the decision to make the C4 Cactus in Madrid saved the facility from closure. Last year, just 50,000 cars were built at Villaverde and the utilisation rate was 25%, although this was partly due to a two-month shutdown while preparations were made for the addition of the new Citroën.

Production of the C4 Cactus has been ramped up over a three-month period, reaching 380 units a day in July. At this level of output, Villaverde is building 85,000 units of the model per annum, according to plant director Jose Carlos Robredo Bertol – assuming 220 production days. Around 200 extra staff have been added to handle the extra work, lifting the total headcount to 1,600 (down from 2,600 in 2012). In order to reach full capacity of 200,000 a year, PSA would need to take on a further 1,800 workers, but for the moment there are no official plans to do so.

The C4 Cactus is an attempt to do something different in the family hatchback/crossover segment: as well as the quirky name and styling, the doors are protected by innovative ‘Airbumps’, while the interior offers optional sofa-style front seating. But the driving forces of the project were weight and cost savings; at 965kg, base variants weigh 200kg less than the C4 on which the Cactus is based.

Rather than underpin the C4 Cactus with its latest EMP2 architecture, PSA chose to base the model on the tried-and-tested (and lighter) Platform 1, as used by the smaller Citroën C3 and Peugeot 208. While there has obviously been a major investment at Villaverde, this was not nearly as high as it might have been, though PSA executives will not be drawn on an exact figure.

New & old in harmony
Interestingly, the desire to make the vehicle as light as possible has led to certain old ideas being revisited. One such is the single-piece folding rear bench seat, which alone is said to bring an 11kg saving. Research had revealed that only 15% of potential buyers would want a split rear bench, and Citroën has several cars already (the C4, C4 Picasso, C4 AirCross) which have that feature in this size class.

A further 6kg has been saved by the lack of an electric sun blind for the optional glass roof supplied by Saint-Gobain, which instead has photochromic glass. Another 6kg has been shaved off the car’s kerb weight thanks to back windows which pop out on hinges rather than rolling down.

In line with the philosophy of keeping mass and cost as low as possible, the engine choice is small, as is the capacity of each unit. PSA’s 1,199cc, three-cylinder ‘PureTech’ is the only petrol option, though it does come in outputs of 75, 82 and 100PS. A 1,560cc, four-cylinder diesel is also available, in e-HDi 92 (PS) or BlueHDi 100 versions. The use of existing engines and some gearboxes has enabled PSA to carry over 67% of parts from other models.

The low weight means that the fuel economy can be impressive: up to 91.1mpg officially, with CO2 as low as 82g/km. This is despite the manual transmission having only five speeds. An updated version of PSA’s ETG manual ‘automatic’ is available too, and this has five or six ratios, depending on the engine.

Airy inside & out
The size of the C4 Cactus is intriguing, especially given the first part of its name. Although it is based upon the C4, its shorter length of just 4.16 metres means that it is closer to the Nissan Juke than the latest Qashqai. However, the 1.5-metre height and 2.6-metre wheelbase are identical to those of the C4. The interior is spacious for the size of the vehicle, with occupants sitting quite upright and those in the front enjoying a generous view; the top of the dashboard is uncluttered and lower than in many rival models. And thanks to the overhead mounting of the passenger airbag, the top-accessed glovebox is far deeper than normal.

Faurecia is a major supplier for the vehicle, providing the following components: the seat frames and mechanisms; the front bumpers; the external trim on the bootlid, including two-colour Citroën logos (black centre and chrome edges); the protective cladding on the front and rear bumpers; the rear spoiler; all the exhaust lines; firewall soundproofing; the front and rear underlay; and front carpets for the passenger compartment. 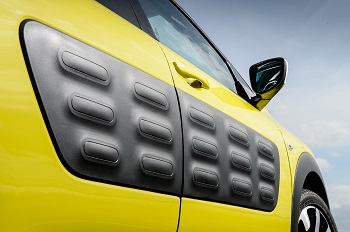 However, the unusual Airbumps were developed by polymer specialist REHAU at its Morhange R&D centre in north-eastern France, using a BASF Coatings elastic material. Each air-filled thermoplastic polyurethane (TPU) group of capsules protects the sides of the vehicle from minor dents, such as might be caused by the doors of adjacent vehicles being opened onto it.

The Airbumps have a maximum compression of 20mm and can be painted in any of four shades to complement, or contrast with, the Cactus’ ten body colours. REHAU supplies Villaverde directly with Airbump door panelling from its site in Tortosa, Spain.

But Airbumps are only part of the story which will see the Citroën brand returning to increasingly distinctive styling. With the Nissan Qashqai a dominant force in the segment that this new model is intended to break into, Citroën had to do something different, and the C4 Cactus is its trailblazer.

Interior innovation
The Cactus’ innovative solutions continue inside, with an interior that features one of the industry’s largest passenger airbags. Developed by TRW and with a capacity of 120 litres, the airbag deploys from the top of the windscreen so that it covers not only most of the dashboard but also the standard 7” infotainment system monitor, which sits proud.

“Interior design requirements have evolved significantly over the last decade, with some manufacturers looking for more instrument panel space for the latest multimedia technologies or a means of increasing storage, or are proposing more open and airy cockpit environments,” says Dirk Schultz, engineering director for TRW's Inflatable Restraint Systems.

“TRW's new roof airbag system is a unique development and provides enhanced styling flexibility for future vehicle interior requirements in combination with excellent restraint performance,” he explains. The airbag module contains a cushion, a gas diffusion channel and a gas generator. These are installed within a housing which is then fixed to, or beneath, the headlining above the windscreen. As it deploys, the bag unfolds in front of the seat occupant and across the windscreen rather than towards the interior, the idea being to help restrain front seat passengers of varying shapes and sizes.

“We are proud to launch our roof airbag for the first time on this modern, striking new vehicle which marks a new era for the French brand,” adds Thierry Metais, TRW’s global account director for PSA.

On the other side of the glass, the Cactus is the first Citroën to feature Magic Wash, a wipe-wash system supplied by Valeo which is similar in some ways to Mercedes’ Magic Vision Control. With the aim of improving the delivery of washer fluid to the screen, the jets are built into the wiper arms. Less liquid also enables the reservoir to be smaller and therefore lighter, requiring fewer components to be assembled and fitted thanks to the lack of bonnet-mounted nozzles.

PSA re-routes its Tour de France
There is intense pressure for PSA to make a success of the innovative C4 Cactus, but the first signs are promising. While series production began in late April, unusually, the roll-out across European markets will take almost six months, with right-hand drive (RHD) cars for the UK and Ireland not due to be delivered until October.

Although it is too early to tell if the new C4 Cactus will be as successful as PSA hopes – and needs – it to be, the model might well point the way to a new manufacturing trend for the group: a steady trickle of production away from France. After a bitter fight with unions trying to stop its closure, the Aulnay-sois-Bois plant built its final car in October last year. Aulnay will continue to produce spare parts on its body-in-white (BIW) line until later in 2014, but production of the Citroën C3 has been transferred to Poissy. Now it seems that for the next-generation model only 10% of production will take place at Poissy, with the majority going instead to Trnava in Slovakia.

Should PSA’s ‘Back In The Race’ restructuring plan fail to meet its targets, the future model programmes of certain other French plants might be in danger, although others look safe. Mulhouse will build the in-demand 2008 until 2020; while Rennes, which makes the slow-selling Peugeot 508 as well as the Citroën C5 and DS5, will not necessarily be the location of any successor models. These are expected in 2016, and for the moment the only vehicle confirmed for the site is the next Peugeot 5008, which will be built at the rate of 70,000 per annum from early 2017. 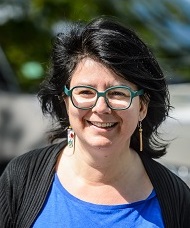 AMS: Why was Villaverde chosen to build the C4 Cactus?
Anne Ruthmann (AR): It’s a question of industrial strategy within PSA.

AMS: When production of the Peugeot 207 CC ends in 2015, will C4 Cactus production be expanded or will another product be added?
AR: We will see which other car will arrive in Madrid; it’s not something I can talk about.

AMS: That plant came close to being closed. Isn’t it a big gamble to put such a radical-looking product into a vastly under-utilised factory?
AR: We never comment on the sales objective of a car but we are very confident of the sales success of this model. It’s not a niche vehicle.

AMS: Assuming that 2015 or 2016 will be the peak of the car’s lifecycle, how high could production of the C4 Cactus go at Villaverde?
AR: The capacity of the plant is 200,000 vehicles, so we have a great possibility to develop production. Don’t forget how big the C-segment is, especially for PSA, and we have to differentiate our offer.

AMS: The Cactus concept had a HybridAir powertrain. When is that scheduled to be added to the production model?
AR: It’s not yet ready for production but we’ll see perhaps for the future. It’s the right technology for this car but we have nothing official to say about this.

AMS: Can you see the car being built elsewhere? The obvious places are Brazil and China.
AR: For the launch, we are concentrating sales in Europe and North Africa, but of course there might be other opportunities. As for production, there is nothing to say – we talk only of our plant in Madrid.