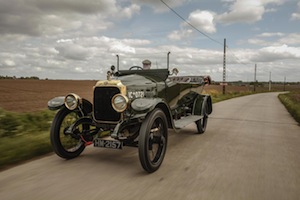 In celebration of this milestone, GM acknowledged some of Vauxhall’s manufacturing achievements over 112 years of continuous vehicle-making: ten years into GM’s ownership, Vauxhall produced the DY and DX models with independent front suspension; two years later, the H-type was launched with an integral body and chassis.

The British brand’s production stretched across two World Wars, when it made the D-type Army Staff Car and Churchill Tank respectively at its Kimpton Road plant, Luton, which now makes the Vivaro van. Meanwhile, the factory at Ellesmere Port has turned out 5m units since opening in 1964.

“Vauxhall has made a significant contribution to GM’s success, and we are very proud to be part of its global family,” said Tim Tozer, Vauxhall’s chairman and managing director.