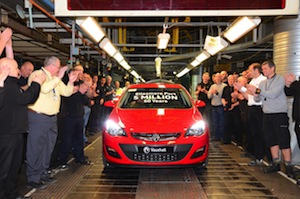 UK – The OEM started building compact cars at its Cheshire plant in 1964, bearing responsibility for all Viva models, the Chevette and all six Astra models from 1982. An average of 100,000 units have left the plant in each of the last 50 years.

The first Viva HA rolled off the line in 1964, which is when an employee now known as ‘Ellesmere Pete’ developed a test process that is used for all vehicles produced at the plant.

The tests on randomly selected Astras take place in the bodyshop; steering geometry is assessed by a half-circuit on two wheels, while suspension components are only signed off after the cars have been launched into mid-air and landed safely. “Ellesmere Pete is a legend in GM circles,” said plant director Stefan Fesser. “After 50 years, he still does a fantastic job of validating the great quality that comes with every car we produce.”

Ellesmere Port was selected as the lead plant for the new Astra, and an extra 300 employees will arrive next month to help build it. The £140m investment by GM will secure the future of Ellesmere Port into the middle of the next decade.