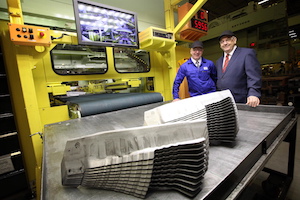 UK – The £13m ($18.1m) machines came online in January at the company’s plant in Sunderland and are now producing lightweight, high-strength steel parts, 24 hours a day. The output is mainly for the nearby Nissan factory.

The two pieces of equipment – a 2,500-tonne Tri Axis transfer press and a 600-tonne blanking press – complete a £83m investment begun by Unipres in 2013. The plant has 1,162 workers; 157 jobs were protected by the overall investment, while 22 new ones were created by the presses. The implementation process took two years and was “one of the largest engineering tasks ever undertaken at the site”, according to the company.

“The new presses went on to three shifts immediately and they are now working flat out. The investment gives us greater capacity and takes a load off the existing presses,” commented Gary Graham, managing director at Unipres.

The company now has 18 presses and uses 514,425 robots to assemble steel components, consuming 450 tonnes of raw material per day. Nissan fits Unipres products on its Juke, Qashqai, Leaf and Note as well as the Infiniti Q30, which has recently been integrated into the OEM’s assembly plant. They are also used on the Kadjar, Espace, Scenic, Clio and Captur models from Nissan’s partner, Renault.

In addition, Unipres parts feature on the Honda CRV and Civic which are built at Swindon; the component manufacturer is ramping up production in order to supply the new Civic Global model, which will be sold in Europe and the US.

In 2016, Unipres is attempting to increase its exports to France, Spain and Russia, which currently account for 25% of business. Since arriving in Sunderland in 1987, the Japanese-owned company has invested £180m in the plant.