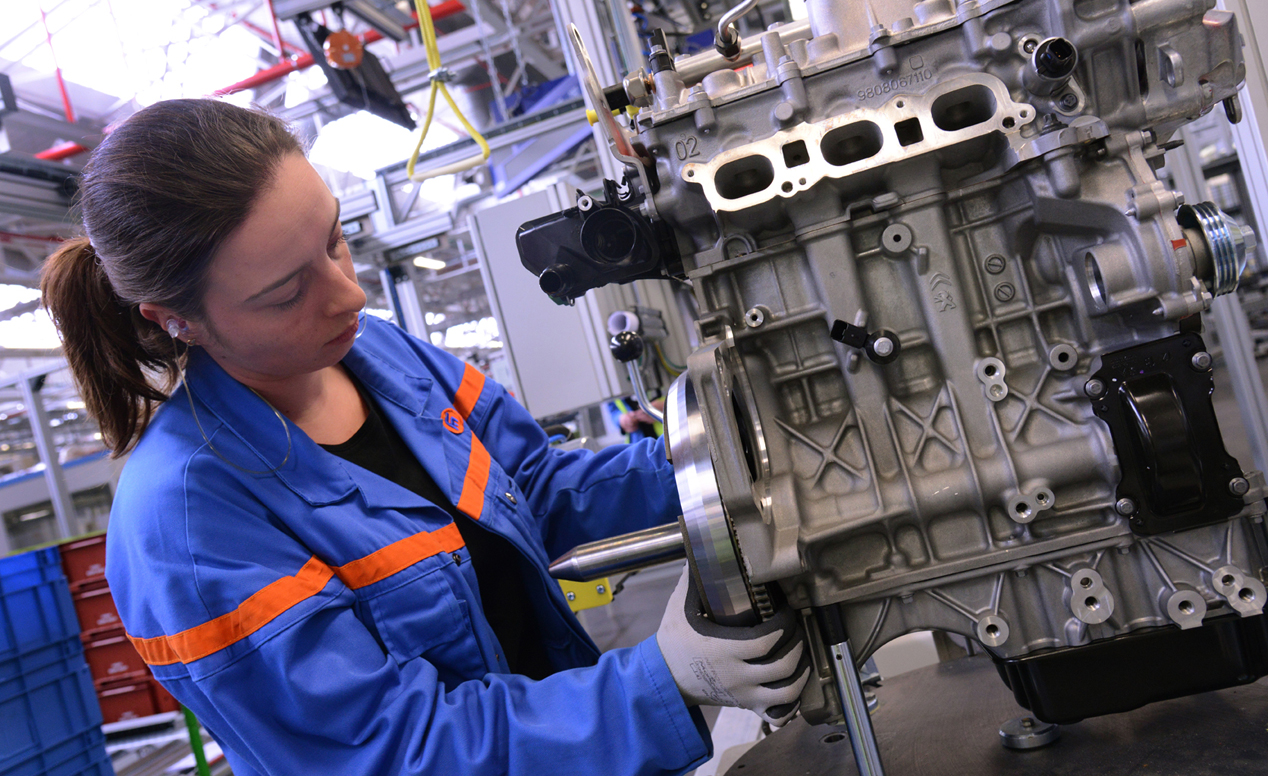 The Française de Mécanique engine factory in Douvrin, north-west France, has built more than 48m power units for PSA Peugeot Citroën, Renault and Volvo since its inception in 1969, but arguably none has been more significant than the new small petrol turbo which recently went into production there. It is a state-of-the-art 1.2-litre, three-cylinder direct-injection engine, and it is fundamental to PSA’s downsizing strategy en route to meeting the 95g/km fleet average CO2 figure to be imposed on volume car manufacturers by the EU at the start of the next decade.

Small petrol engines will play an increasingly important role in meeting that target, especially as new EU regulations covering harmful exhaust emissions, to be introduced this September, will push up the cost and desirability of diesels. The impact will be most significant in the B-segment, which is populated by cars that in many cases sell on price, but many forecasters also expect a sizeable switch from diesel to petrol at the lower end of the C-segment.

Greater demand for petrol engines
PSA’s new 1.2-litre turbo, which will be produced at the rate of 350,000 a year from June, has been created partly to anticipate that shift in demand, but also to gradually replace the seven-year-old 1.6-litre, four-cylinder units co-developed by Peugeot Citroën and the BMW Group. The three-cylinder turbo is up to 21% more fuel-efficient and emits up to 18% less CO2 than the 1.6. PSA was the leading low-CO2 manufacturer in 2012 with a fleet average of 121.5g/km, and brought that down even further to 115.9g/km last year.

The turbo is the latest addition to PSA’s PureTech range, which was launched last year with the 1.0-litre and 1.2-litre normally aspirated port-injection units being built at the Trémery plant in north-eastern France for the group’s A- and B-segment cars – the Peugeot 108, 208 and 2008 and Citroën’s C-Zero, C3 and DS3. The 1.2 turbo – available with either 110 or 130bhp – extends the downsizing strategy to C-segment models. It is initially being offered in Peugeot’s 308 and 308 SW and Citroën’s C4, but is destined for other models from July. PSA insiders make no secret of the fact that there are even more powerful versions to come.

Investment & development
Française de Mécanique, known simply as the Douvrin engine plant within PSA, has benefited from €900m of new investment from the company, the EU, the French state and the Nord-Pas de Calais regional government for the new PureTech turbo. Slightly more than half of the outlay was spent on research and development and the rest on production facilities and tooling. Around 40% of the engine parts are interchangeable between the normally aspirated and turbocharged units. The 1.2 turbo will also be made in China for local use.

All PSA’s own work, it took 250 engineers four years to develop and is the subject of 121 patent applications. The decision to go with a 1.2-litre capacity – as opposed to the 1.0-litre units favoured by other manufacturers – was an easy one to make, the company says. A 1.2 fits PSA’s preferred capacity of 400cc per cylinder, and is better for packaging, cooling and the bore-to-stroke ratio. PSA says it may turbocharge its 1.0-litre engine to meet market and taxation requirements in countries like Brazil, but admits it would not be as efficient as the 1.2.

The cast parts for the new three-cylinder engine are sourced from a number of PSA plants
Douvrin has no foundry – the one opened in 1971 was closed in 2005 – so the various parts for the 1.2-litre turbo are brought in from other PSA plants. Cylinder heads arrive from Charleville Mezieres for machining, for instance, while crankshafts are sourced from Mulhouse. The engines are produced under PSA’s new Lean Manufacturing Engineering (LME) process, which reduces production time by 50% and the surface area of the plant by 30% compared with traditional systems.

The cylinder heads are made of aluminium and feature three valves per cylinder and chain drive. An integral exhaust manifold allows faster warm-up and, therefore, improved efficiency. It takes four hours to complete each one using 55 machine tools which reduce their weight from 12.5kg on arrival to 8.5kg once completed. This heavily automated section of the production line needs only ten employees per shift and occupies 4,500 sq.m of the 25,000 sq.m devoted to production of the new engine.

Automation in assembly
There are no hydraulics in the valvegear: everything is controlled by tappets. These are selected and installed by robots according to a data matrix – in effect, an individual passport affixed to each engine. Since there are as many as 12 different tappets per engine and 45 to cover all the various iterations, robots ensure greater production accuracy. The crankshaft and engine block machining areas each occupy just under 2,000 sq.m. The crankshafts are finished using 20 machine tools on a U-shaped line with five employees per shift. The most sensitive part of the operation is the balancing process, which is fully automated using new-generation machines.

Another U-shaped line with 26 machine tools and seven employees per shift finishes the aluminium engine blocks, which have cast-iron liners with one-micron-wide scores to trap oil when they are running. The oil used in the machining process is fully recycled. The engines are washed in a standalone machine and honed with diamond cutting tools. The engine blocks, cylinder heads and crank cases become a single unit in an area of the plant referred to by Douvrin as ‘The Church’.

Then the engines pass to the most labour-intensive part of the operation – the 3,800 sq.m assembly and build-up area. Fifty-seven people per shift at 47 workstations perform 80 different operations on a 380m line.  Each workstation is only 1.2m wide to keep the line as compact as possible. The workers change roles every two hours to avoid repetitiveness and boredom. Tools are automatically fed to the workers to reduce stress and minimise wasted time. PSA used Lego pieces to develop the logistics and ergonomics for assembly line staff. 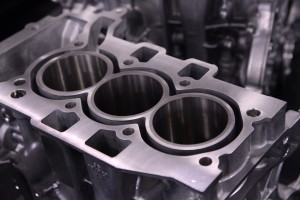 26 machine tools and seven employees per shift finish the aluminium engine blocks, which have cast-iron liners
High quality standards
A red card system is in operation for any parts which are found to be substandard. These are removed and recycled where possible. PSA admits this is expensive, but says it is a necessary precaution to achieve its self-imposed quality standards.

Each engine is bench-tested at up to 3,000rpm and 230Nm of torque for five minutes to check temperatures and pressures. The direct-injection system operates at up to 200 bar, while the Honeywell compressors spin at up to 240,000rpm. In total there are 54 different quality tests, some of which only three people are qualified to carry out. This is the only area of the line where the red card system is waived; engines which do not meet quality standards but which can be satisfactorily modified are issued with an orange card.

Production of the 1.2-litre turbo currently runs at only 80 a day, but as the line speed increases and second and weekend shifts are added in the summer, this will rise to 350,000 a year. PSA says this could be increased by around 50% if the expected demand materialises, and is open to selling the engine to outsiders. Peugeot is expecting to increase 308 sales by 22% this year partly thanks to the new engine, and says most of this will be incremental because it now has a more competitive petrol offering.

Douvrin is jointly owned by PSA and Renault and built just under 800,000 engines for the two French brands and BMW in 2013
In the past, petrol has accounted for only 14% of 308 sales, and a mere 12% in countries like the UK, where there is a large fleet market ruled by the need to keep down CO2-based taxation costs. With the new engines, Peugeot forecasts a 27.5% share for petrol engines across Europe and 29% in Britain.

Douvrin is jointly owned by PSA and Renault and built just under 800,000 engines for the two French groups and BMW in 2013, around 85% of which were for Peugeot or Citroën. Besides the new PureTech turbo it also produces four versions of the PSA-BMW 1.6-litre engine at the rate of just under 1,000 a day, some of which are shipped to the UK for Mini; three versions of the 1.4-litre turbocharged petrol engine co-developed with Ford at the rate of 800 a day; and three iterations of PSA’s venerable TU-TUF petrol units, introduced in 1986 and 1991 respectively, at the rate of 200 a day. It also makes two different varieties of the 1149cc D petrol unit for Renault. In 2017 it will add a new family of PSA diesels to its portfolio. The plant is located in an area of France which, with the closure of PSA’s Aulnay plant, has taken over the area around Paris to become the country’s leading automotive hub. It provides jobs for 3,450 people.