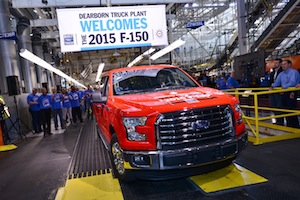 For some it would be an almost spiritual experience, but for me yesterday’s visit to Ford at the place where it all began (more or less), was about appreciating the enduring human capacity for innovation; from the first moving assembly lines to the robotised manufacturing methods of the 21st century, the Rouge Complex at Dearborn has seen it all.

If the US had invented Buddhism too, I’m confident that a fair few Americans would happily be reincarnated as a pick-up truck, such is the cherished status of this vehicle within the national culture. Driven by white- as well as blue-collar workers, its predominance is immediately noticeable to outsiders. In 2014, Ford’s own F-Series was not only the bestselling pick-up for the 38th year in a row, but the bestselling vehicle for the 33rd year.

Thus it was a leap of faith (or was it sacrilege?), when Ford decided to recreate its classic truck in aluminium for the 2015 model. The only major component now made from steel is the structural part of the dashboard, as pointed out to me on the shopfloor by Ron Ketelhut, the chief body construction engineer who masterminded the recent renovation of the bodyshop.

For when a vehicle is reborn in such dramatic fashion, so is the plant. In the space of one month last year, Ford ripped out the old bodyshop equipment and installed new gear for joining the aluminium by rivets, screws and adhesives – requiring no fewer than 1,000 trucks of tooling. Installations elsewhere onsite included new press lines for stamping two types of aluminium, a heat-treat area to harden the alloys, a preparatory chemical coating system for the adhesives, and hydroforming lines for the support rails.

Ketelhut is in no doubt that this was “the most challenging [project] that we have ever taken on”, because of the short time available for the renovation but also the subsequent high turnover required for the F-150; it is not the aluminium joining technology which is new, but its application at high volume. “It’s such a significant, iconic vehicle for the company, you just couldn’t let anybody down,” explains Ketelhut. “There was a lot of pressure.”

Planning began as far back as 2009 and the lengthy preparation seems to have paid off, as Ketelhut says that Ford was able to follow its standard acceleration programme for steel vehicle launches. The plant is now producing over 1,200 F-150s per day, as is the sister bodyshop at Kansas City, Missouri, which was installed shortly after; both are operating at maximum capacity.

The switch to different joining methods, specifically the lack of welding for the bodies, has also had a significant impact on the footprint of the plant. “There’s very few people out there, it’s extremely quiet, it’s clean, it’s small,” states Ketelhut. On the surface, it does look like a manufacturing plant of the future.

But this bold approach to the use of aluminium contrasts considerably with the more tentative experiments of other OEMs, who seem to be watching and waiting to see what happens with the born-again F-150. Asked whether the new aluminium bodyshop could be a blueprint for other facilities in future, Ketelhut replied with confidence: “It’s definitely our model going forward.”

I do hope this faith is rewarded – or at least a few people at Ford will be coming back as bicycles.