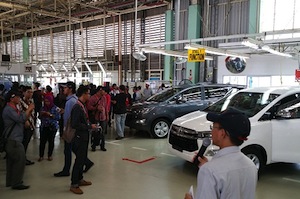 Indonesia – Plant 1 has become the first facility worldwide to make the model, after an investment of five trillion Indonesian rupiah ($361,000). Toyota Motor Manufacturing Indonesia (TMMIN) has also taken steps to increase the number of its suppliers in the area, resulting in a local content level of 85%.

“This celebration would not be possible without the cooperation from our partner TAM, local suppliers, dealers, and many more as well as the tremendous support from the government and people of Indonesia,” said Masahiro Nonami, TMMIN’s president-director, at the launch ceremony.

With the introduction of the new model, the number of suppliers to TMMIN has grown by 16 to 123 tier-one companies. TMMIN says it is “making concerted efforts” to nurture supplier development, focusing on “skill transfer, safety, quality and efficiency”.

Toyota Indonesia commenced exports of completely built-up (CBU) vehicles in 1987 with the Innova’s predecessor, the Kijang, sending 500 units per year to countries in the Asia-Pacific region. Over the past five years, the Innova has been exported at an average rate of 16,000 units per annum, not only to Asia-Pacific but Africa, Latin America, the Middle East and the Caribbean. Exports of CBU vehicles reached a cumulative total of 160,000 in 2014, and over the past five years TMMIN has also exported over 45,000 petrol engines.

Karawang Plant 1 started production in 1998 and makes the Fortuner in addition to the Innova; it has a capacity of 130,000 units. Karawang Plant 2, which was opened in 2013, builds the Etios, Valco, Vios, Limo and Yaris, with a capacity of 120,000 units. Plant 1 in Sunter, North Jakarta, is capable of turning out 195,000 petrol and ethanol engines per year, plus 12,000 tons of castings. The 42-year-old engine plant will be joined by a new facility in the first half of 2016, which will have capacity for 216,000 passenger-car engines.