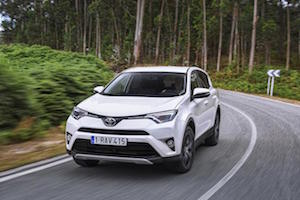 Russia – The model will be produced alongside the Camry from August this year, for sale in Russia, Belarus and Kazakhstan. Toyota has invested 7.1 billion roubles ($100.7m) in the plant to expand the production areas, install new equipment and increase automation in the press shop, bodyshop and assembly hall. Total capacity has doubled to 100,000 cars per year.

“We have successfully completed the expansion project at the plant,” said Yoshinori Matsunaga, executive production director of Toyota Motor. “All preparatory work is carried out according to the plan.” Conveyor speed will double from May 2016, while the workforce will increase by 800 individuals.

The RAV4 will become the ninth model to be produced by Toyota in Europe, along with the Avensis, Auris, Yaris, Aygo, Camry, Corolla, Verso and Toyota C-HR. In allocating the RAV4 to St Petersburg, Toyota confirmed its confidence in the Russian market, pointing out that the group’s market share in the country reached a record 7.5% last year – more than any other Japanese brand.

Hidenori Ozaki, president of Toyota Motor, commented: “The Russian automotive market remains one of the top priority markets for Toyota on [a] global level. Despite the temporary volatile situation, our mid- and long-term strategy and plans in Russia remain unchanged.”