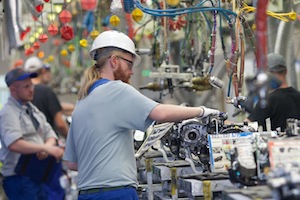 Belgium – The OEM started manufacturing in the continent in 1971 after establishing Toyota Caetano Portugal, which currently makes the Dyna commercial vehicle. Toyota now has nine plants, including three powertrain operations, in seven countries and has invested over €8 billion ($10 billion) in its European footprint. The 9m-unit milestone was reached this week.

“At Toyota, we have a long tradition of building locally what we sell locally. Recently, we have also expanded our exports outside Europe based on the competitiveness of our European operations,” said Didier Leroy, president and CEO of Toyota Motor Europe. “We are committed to keeping production in Europe by bringing technology like hybrid and management innovations that enable us to continuously make our manufacturing plants globally competitive.”

Toyota has a network of 400 suppliers in Europe, sourcing parts from more than 600 manufacturing sites in the region. Around 20,000 individuals are directly employed by the OEM and its affiliates.

At its Burnaston plant in the UK, established in 1992, the OEM makes the Avensis sedan and wagon, Auris hatchback, Touring Sports and all Auris with hybrid technology. Toyota’s UK branch also produces 1.6-litre and 1.8-litre VVT-i engines, as well as assembling hybrid engines at its Deeside plant in North Wales.

In Turkey, Toyota started production in 1994 and currently makes the Corolla and Verso. In France, the OEM has been manufacturing since 2001 and now makes the third-generation Yaris alongside the Yaris hybrid; from 2013, the Yaris has been made in France for the North American market. Manufacturing since 2005, a joint venture with PSA Peugeot Citroen in the Czech Republic makes the new AYGO. Toyota Motor Russia launched in 2007 and focuses on the Camry; the operation at St Petersburg will add stamping and plastics production later this year, and the RAV4 in 2016.