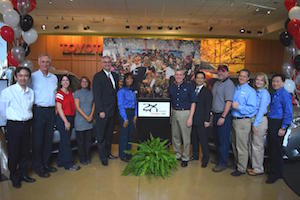 US – The plant in Princeton has built 4.45m vehicles since its establishment, expanding its line-up from the Tundra to include the Sienna minivan, Sequoia full-size SUV, Highlander and Highlander Hybrid midsize SUV. Toyota has invested a total of $4.3 billion in the operation.

Toyota Indiana has undergone three expansions and now makes vehicles for 27 markets. It has a workforce of 5,000 individuals, supporting a total of 24,058 jobs in the state with the inclusion of intermediate and spin-off employment. Though idled for three months during the 2008 recession, the factory kept all of its staff, setting up classrooms and continuing with skills development.

“From the first Tundra produced to the current vehicle line-up, we are proud of the accomplishments of the Toyota Indiana team members,” said Osamu Nagata, executive vice-president and chief administrative officer of Toyota Motor North America. “It is clear the plant has a long and bright future ahead.”