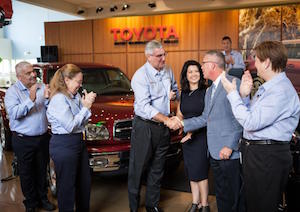 US – The milestone was reached almost 20 years after the start of production. The five-millionth vehicle was a Sequoia Platinum.

Since the establishment of the plant in 1998, Toyota has invested $4.3 billion in the manufacturing operation and the workforce has grown to 5,300 personnel.

Toyota operates ten plants in the US, employing more than 36,000 people; in North America, the company has 14 factories and over 46,000 employees. In the past 60 years, Toyota has assembled more than 33m cars and trucks in North America.