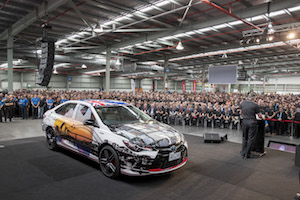 Australia – The OEM has wrapped up its manufacturing operation in the country after 54 years and 3,451,115 vehicles. Toyota stopped production of the Aurion in August and the Camry hybrid in September at its Altona plant near Melbourne, three years after the decision was made to conclude the operation.

Dave Buttner, president of Toyota Motor Corporation Australia (TMCA), said: “Thanks to everyone’s long-standing efforts, Toyota became the top automobile manufacturer in Australia, and the vehicles produced here became a byword for quality and reliability not only in Australia but also in the world, as the vehicles were exported to other regions like the Middle East.”

Production began in April 1963, four years after Toyota set up a business division in Australia. The Tiara (Corona) was assembled at the Port Melbourne plant, the site of its current headquarters, and later joined by the Crown, Corolla (plus engines) and the Camry. Exports of the latter to Thailand began in August 1993.

The first vehicle to be made at the Altona plant was the Corolla, from July 1994, with the line up soon expanded to include the Camry, and then the Aurion in October 2006. Exports of the Camry to the Middle East began in February 1996. The OEM also had a joint venture, UAAI, with GM Holden from 1988 to 1996.

On the closure of the operation, Toyota president Akio Toyoda said: “I sincerely express my gratitude for the efforts of the employees, customers, suppliers, dealers, government officials, and local communities that have supported production activities in Australia.” He promised that, despite the end of manufacture, TMCA would be “supported even more than before”.

The Altona plant will be turned into a training and product development facility, while sales and marketing functions will be transferred from Sydney to the Melbourne headquarters. Toyota has been preparing for the end of its Australian manufacturing operation since the decision was made in 2014, and says it will continue to provide re-employment assistance to the workforce until mid-2018.