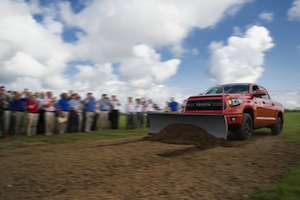 US – Located in Kentucky, at the OEM’s largest vehicle manufacturing operation in North America, the 250,000 sq.ft production engineering facility will include a state-of-the-art test laboratory and accommodate 700 personnel. The $80m expansion is Toyota’s third major groundbreaking in North America this year.

“Bringing Toyota’s production engineering team under one roof is a key element of Toyota’s ongoing unification of our North American operations, which includes a new headquarters in Plano, Texas, and new facilities in Ann Arbor, Michigan,” said Jim Lentz, CEO of Toyota North America. “The impact of these investments will be felt by our customers through improved quality, adoption of new technologies and greater value of the vehicles we produce, like the iconic Camry built here in Georgetown, Kentucky.”

Around 300 personnel are being relocated to Georgetown, in a move which “furthers Toyota’s commitment to drive more local decision-making and ultimately faster, more precise response to the needs of the marketplace”, the OEM stated.

Toyota started developing its presence in Kentucky over 25 years ago. The new construction is scheduled to be completed in late 2017.