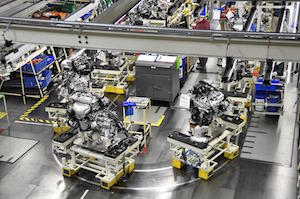 US – The factory in Kentucky will become the first in North America to produce vehicles on the Toyota New Global Architecture (TNGA), beginning with the 2018 Camry. In addition to modifications relating to TNGA, Toyota says the plant will install new equipment and build a new paintshop to “modernise and streamline” its production.

“This $1.33 billion investment is part of Toyota’s plan to invest $10 billion dollars in the US over the next five years, on top of the nearly $22 billion Toyota has invested in the US over the past 60 years,” explained Jim Lentz, CEO of Toyota Motor North America.

Wil James, president of Toyota Motor Manufacturing, Kentucky (TMMK), noted that the investment is the largest in the history of the plant, which opened in 1986, and said the overhaul will let the plant "stay flexible and competitive”.

TNGA is billed as a revolutionary strategy to change the way Toyota designs, engineers and manufactures vehicles. It is expected to cut development time for new models and vehicle improvements, as well as improving flexibility in production.

The new investment at Kentucky adds to the $530m announced in 2013, some of which was intended to support Lexus production, and brings the total to $1.86 billion in the past four years. Kentucky is Toyota’s largest plant worldwide and last year produced nearly a quarter of the vehicles it made in North America. Its workforce has grown to 8,200 individuals after an extra 700 were hired for the upcoming launch of the 2018 Camry.