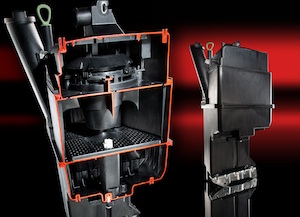 A thermoplastic oil tank for dry sump engines has been developed by Hummel-Formen, Germany. The reservoir, which weighs around 2.6kg, is made from Ultramid A3WG7, a BASF polyamide 66 with 35% glass fiber reinforcement which is resistant to oil and thermal aging. The tank is claimed to be 59% lighter than previous steel or aluminium welding constructions.

The complex plastic component is used in the new Mercedes-AMG GT and comprises ten different, injection-molded polyamide parts, which are joined together with 13 further elements such as sensors, sieves, covers and screws to form one component. This is done by vibration welding and various snap-in mechanisms.

The Ultramid used shows high resistance to oil and corrosion, is thermally stable up to 180°C (for short periods even up to 240°C) and contributes to a favorable vibration and acoustic behavior because of its high damping and stiffness, claims BASF.