A number of composite automotive parts enhanced with graphene were on show at JEC World in March this year. James Bakewell investigates if this material has a real place in the automotive industry 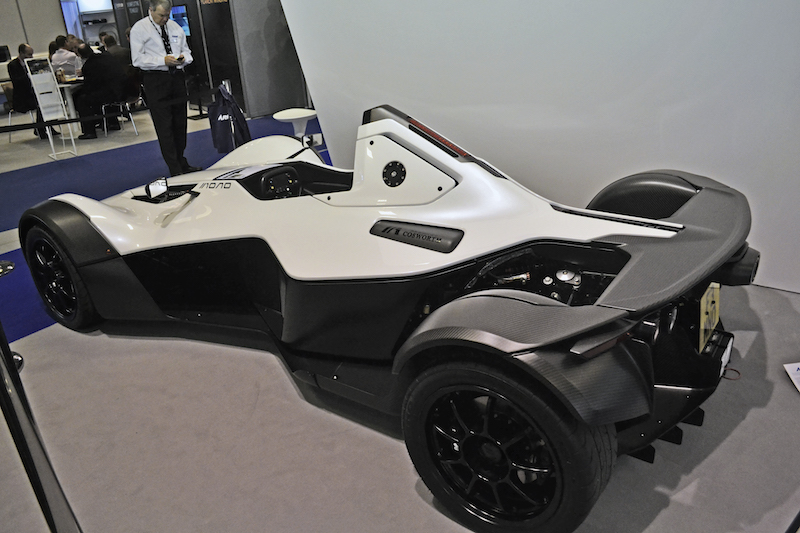 Few of us would imagine that you can win a Nobel Prize for Physics by playing with sticky tape, but that’s what University of Manchester UK researchers Andre Geim and Konstantin Novoselov did in 2010. By placing the adhesive tape on graphite, the pair managed to rip-off thin flakes of carbon. In the beginning they got flakes consisting of many layers of graphite, but as they repeated the process, the flakes got thinner until they were left with a material that in 2004 they characterised as graphene – a tightly packed layer of carbon atoms that are bonded together in a hexagonal, honeycomb lattice.

Graphene displays some extraordinary properties. In its single-layer (one-atom-thick) form it can possess a stiffness of 1TPa, a strength of over 130GPa, outperform diamond in terms of its thermal conductivity and it is the best conductor of electricity currently known. Single-layer graphene is difficult and expensive to manufacture, but other forms of the material exist. Graphene nanoplatelets (GNPs), for example, consist of a few graphene layers and can be manufactured by the exfoliation of graphite. They demonstrate high electrical conductivity, excellent mechanical and thermal properties, and are cheap in comparison with single-layer graphene. Through the addition of small amounts of GNPs, the properties of composites can be enhanced significantly.

The MSU researchers found that their GNP-enhanced SMC was electrically conductive enough to be electrostatically painted, without the need for the additional coating process now used to paint most SMC parts. Such work pointed to the potential of graphene for automotive composites, and since then a small number of production applications have started to trickle through.Meanwhile, relatively early work in the US at Michigan State University (MSU) showed that when a 3% loading of GNPs – in this case supplied by MSU spin-out XG Sciences – was added to a standard sheet moulding compound (SMC) formulation, the resulting composite was stronger by 40%, stiffer by 20% and demonstrated an 80% increase in impact strength. The potential benefits of GNPs do not end with increases in mechanical properties. They can be used to increase the electrical conductivity of composites.

In 2016, Briggs Automotive Company (BAC) worked with Haydale’s Composite Solutions (HCS) business to manufacture rear wheel arches made from graphene-enhanced CFRPs for the Mono - a road-legal, single-seater sportscar. BAC chose to use graphene in the rear wheel arches due to the size and complexity of the part, to thoroughly test the manufacturing process and how the material fitted in with the car.

HCS’s director of aerospace and defence at the time, Ebby Shahidi, said: “These initial materials have shown some major increases in impact and thermal performance coupled with improved surface finish.”

The company’s managing director, Gerry Boyce, added that the use of GNPs enabled the HCS team to “arrive at a solution that met or exceeded the performance specifications of the part, while making significant savings in mass where we are seeing reductions of approximately 20%. This has clear implications for cost, performance and fuel economy in vehicles if applied widely in the manufacturing process.”

Solution for a supercar

Most recently, Magna Exteriors has worked with graphene supplier Applied Graphene Materials (AGM) and prepreg specialist SHD Composites (SHD) to develop a graphene-enhanced CFRP tailgate for W Motors’ rear-mid-engine Fenyr SuperSport supercar. The project came about in quite an organic fashion, according to Magna Exteriors’ global director of material science, Dr. Joseph J. Laux. Laux found out in the press that SHD, a company Magna worked closely with in the past, had been developing graphene-enhanced prepregs and was keen to see what was possible with these materials.

“[Graphene]’s a bit ‘out there’, but we like to get involved early in these emerging technologies because we really don’t know where they’re going to go,” Laux explained. “People say it’s expensive and that you’d have to work with a lot of start-up companies, but that’s not going to stop us looking at it and figuring out what it can do.” W Motors’ owner, Ralph R. Debbas, had been studying car design at Coventry University in the UK in the mid-2000s when graphene was starting to make headlines, and he wanted to test the material on one of his cars. Working with the design team at Magna Steyr in Italy, the partners took the tailgate from concept to finished part in a matter of weeks.

The prepreg exhibits particularly high fracture toughness, good interlaminar shear strength and is more durable than the prepreg previously used to produce the tailgate. It is used to increase the torsional stiffness of the part, while improving in-service fatigue life.The part is a shell construction comprising an inner panel of 1.8mm in thickness and weighing 1.39kg, and an outer panel of 1.5mm in thickness weighing 1.42kg. Each is manufactured through hand lay-up and autoclave using SHD’s MTC9810 GNP-enhanced epoxy prepreg system, which was launched by the company, following 18 months of development, in March 2017.

Further, the partners also found that the surface quality of the parts was significantly better, requiring less direct labour to paint. “The surface is incredible. The underside, which is an exposed weave with a clearcoat, almost looks like liquid metal,” observed Laux.

The causes behind this improved finish have yet to be determined, but Laux thinks it might have something to do with alterations in the thermal expansion and shrinkage coefficients of the epoxy resin in comparison with the carbon-fibre reinforcement. Epoxy tends to shrink when it is cooled after moulding, while the carbon fibre remains stable, which can cause indentations to form on the surface of the finished part. The use of graphene may be helping to lessen the effect of this shrinkage.

The graphene-enhanced prepreg was used as a drop-in replacement for the incumbent material, and anecdotal evidence from the skilled workers responsible for the lay-up and autoclaving of the part was highly positive, according to Laux. “They said it actually processed better. Sometimes the best feedback you get is from the folks that actually handle this material on the line,” he stated. “AGM and SHD really know what they are doing. They know how to make a prepreg that processes well. I’m happy with the feedback.”

They are also looking at the possibility of producing more graphene-enhanced body panels – such as the roof and the bonnet – for the Fenyr SuperSport. Incorporating graphene into composites presents challenges, said Laux: “The challenge is how do you take this magic material and convert it into something you can use. A lot of the know-how is not in just synthesising graphene, it’s in working out how you can harness it, how you convert it, how you get it dispersed.”The partners are now working on refining their processes, looking at how they can use graphene-enhanced composites to reduce the gauge of parts and thereby save weight, and are developing strategies for taking advantage of graphene’s other properties, such as its electrical conductivity. “We’re trying to figure-out how we can harness some of these other attributes, which could lead to graphene becoming more viable,” Laux predicted.

So far, the use of graphene-enhanced composites has been confined to expensive and niche vehicles, but could that change? Through its Graphene Flagship, the European Commission (EC) has set aside a budget of €1 billion ($1.22 billion) to fund research in the hope of bringing the nanomaterial into the mainstream in the next decade. For the automotive industry, that research is already starting to bear some fruit.

Ahmed Elmarakbi, professor of automotive composites at the University of Sunderland, UK, is leading part of the efforts, called Task 10.11 – Composites for Automotive. Over the last two years he has been conducting a series of tests with support from Centro Ricerche Fiat (CRF) to produce graphene-enhanced composite parts and analyse their behaviour. The prototypes are bumpers made with carbon- and glass fibre-reinforced plastics (GFRPs). Elmarakbi explained: “The results we discovered in the first stages are significant; we achieved a lot more than we ever anticipated. The material is very light and very strong and the impact testing we did showed 40% higher specific energy absorption than in traditional composite materials.

“It’s also more stable; it’s a controlled fracture when you hit it. Even at a higher velocity, it absorbs the energy in a controlled way. We expected this at the beginning but did not expect the results to be this high.”

Elmarakbi admitted that challenges do remain. Dispersing the nanomaterial in the resin matrix is problematic, as is striking a balance between strength and energy absorption in the graphene-enhanced parts. “Part of the challenge in reaching this point has been that it’s all new, nothing exists and everything we’re doing is a first. We’ve even had to design the software to simulate the graphene applications from scratch.”

The use of graphene-enhanced composites in the automotive industry is in its infancy and, as with any new material, the challenges to its adoption are many. But the work of these pioneers is certainly getting a lot of notice.

Elmarakbi added: “We’re in talks with the automotive manufactures and their tier one suppliers, who are very interested in our work and how they might apply our findings in future. Ten years is nothing in automotive development, their research and development teams will be looking well beyond that and they can already see the potential of graphene.”

Magna’s Dr. Joseph J. Laux is cautiously optimistic as to graphene’s prospects in composites. “I’m open minded. We did things 20 years ago that people would say would never work and now they’re pedestrian, run-of-the mill,” he concluded.

Functionalising the surfaces of GNPs

Achieving a homogeneous dispersion of conventional GNPs within a polymer matrix is difficult as the large surface area of the particulates induces attractive forces between them, which lead to their agglomeration. Furthermore, the surfaces of GNPs do not react chemically, which means they do not bond well with resin materials, leading to composites with poor mechanical performance.

In contrast, Haydale’s plasma process does not employ wet chemistry, and the company claims it reduces damage to the GNPs being processed; rather, it removes impurities inherent in the raw material. Further, the functionalisation process can be tailored to the individual needs of the resin medium to which the GNPs are to be added, and to the material properties to be enhanced. The technology does not consume much energy and is environmentally friendly.

For its part, Applied Graphene Materials says the GNPs it produces are inherently functionalised and can be tailored to a given resin system. Also, the company is developing a method for ‘printing’ GNPs directly onto composite laminates in a controlled and targeted manner

Four specialist end-users from different sectors of the composites industry have committed to explore what AGM is calling ‘Structural Ink’. These include Prodrive Composites, which has signed heads of terms for a JDA with AGM. Prodrive designs and produces parts in the high-end automotive, motorsport, aerospace and leisure goods sectors.

The chief engineer at Prodrive Composites, John McQuilliam, noted: “We have investigated the potential for graphene within Prodrive’s business and identified several application areas for development and ideally early adoption.”