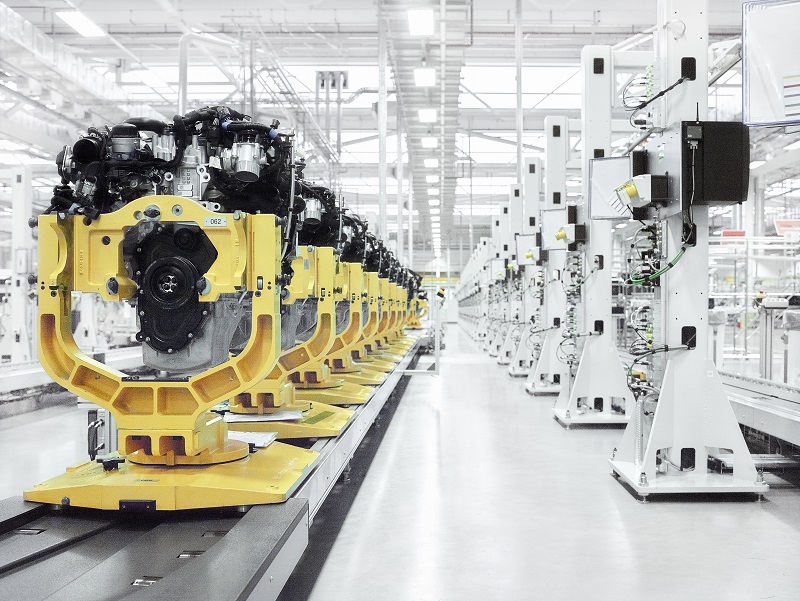 Jaguar is now making its own engines for the first time since the mid-1990s, when the AJ6, AJ16 and V12 went into retirement. A new £500m facility, in what was once the heartland of UK mechanical engineering and automobile production, has begun manufacturing the Ingenium diesel engine for Jaguar’s compact XE saloon and, in time, sister company Land Rover’s Discovery Sport. Petrol versions of the engine will be produced from June 2016.

Ingenium is only the company’s fourth in-house engine. It is a modular all-aluminium 2.0-litre unit which will eventually replace the Ford four-cylinder diesels in use in a number of JLR models. The links with Ford will not be severed, however. The American OEM’s plants at Bridgend (petrol) and Dagenham (diesel), both in the UK, will continue to supply JLR with V6s and V8s.

The word ‘ingenium’ is Latin for ‘innate talent’, the quality the engine is claimed to exhibit. It is a clean-sheet-of-paper unit which is both light and efficient: the diesel will offer two power outputs, the lesser of which will give CO2 emissions of under 100g/km for the XE. Both versions meet EU6 emissions regulations.

If the Ingenium is state-of-the-art, the same can be said for the Engine Manufacturing Centre (EMC) in Wolverhampton where it is made, only 30 minutes from Jaguar’s Castle Bromwich plant and the Land Rover factory at Solihull, where the XE is currently in launch phase. Less than two hours to the north is Land Rover’s other plant at Halewood, where the Discovery Sport will be produced.

New engine, new factory
Planning began four years ago, with building and fitting out starting in 2012, at about the same time as operations director Trevor Leeks joined the company. “Our goal was to transform the way in which engines are made and to be recognised as the new global benchmark for excellence – not just with our technical solutions, but also with the people we invest in,” he says.

The plant lies in an area with a higher-than-average level of unemployment, and there were plenty of skilled engineers looking for work. But there are also people who have no engineering background on the workforce, including ex-military personnel; aptitude and attitude matter more than experience, says Leeks. When the factory is at full capacity it will provide 1,400 jobs and support another 5,500 in the supply chain.

The plant occupies 100,000 sq.m of a former industrial site which had been returned to brownfield status before its new inhabitants arrived. “All you found here before we came was a few dog-walkers,” says the senior manager of Engineering and Maintenance, Neil Hume. The nearby local authorities of South Staffordshire and the city of Wolverhampton have built the infrastructure to support JLR’s plant.

The facility is split into three main buildings: machining, diesel engine assembly and petrol engine assembly, the latter currently being fitted out. The workforce is now around 600.

Flexibility in the machining hall
Only 60 of these employees work in the 38,000 sq.m machining hall, mainly on maintenance, cleanliness and improvement operations. The actual machining is performed by 173 leading-edge machines which accounted for £150m of the investment in the plant. “What makes them state-of-the-art is their flexibility,” says Leeks, referring in particular to the 94 MAG five-axis CNC machines. “It is theoretically possible, with the right tooling changes, that over a weekend we could take one from the start of the block line and transfer it to the end of the head line.”

“On the crankshaft line, we work to tolerances of three microns. A human hair is 50 microns” – Neil Hume, JLR

This part of the plant carries out just three operations: machining of the cylinder block, cylinder head and crankshaft. The remaining 243 components for the Ingenium diesel engine come from outside suppliers, direct to the assembly hall on a just-in-time (JIT) basis. Un-machined blocks are supplied by Nemak’s Saarland factory in Germany; the same company supplies the head castings from the Czech Republic; and the steel-forged crankshafts come from CIE in Spain. The block and head lines are U-shaped, with engines transferred from one operation to the next by a combination of Liebherr gantries and Bleichert conveyors, but the crankshafts are switched between 26 individual operations by gantry only.

While the roll-call of suppliers reads like a United Nations of machine-tool manufacturers, there has been plenty of business for British companies, too. The beneficiaries include: Harry Major (washing machinery), TKSE (assembly machines), EWAB (conveyors), J W Froehlich (valve seat, assembly guide and leak-test machines), Neuteq (journal polishing) and Landis, the doyen of grinding machine manufacturers. Germany has also done well out of it; apart from the MAG machining cells, the plant also uses Kuka robots, and all the control systems are from Siemens.

More machines than people
The cylinder block line has a total of 78 machines, including 57 MAG CNC cells, but only 14 employees. Blocks are first heated to 180°C so that the cast-iron cylinder liners can be inserted, then cooled to ambient temperature – a process which takes around 35 minutes.

Blocks go through 23 different operations before completion, including five stages in the MAG cells. During this time they will travel 570 metres and be pared down to just 35kg. At various stages, some components are taken out for gauging – the first of several quality control checks – and one engine in every 50 is inspected for size. A quarter of those are removed to a separate room for an even more forensic examination. Intermediate washes remove the swarf, and because this is such high-quality aluminium it is sold on, potentially re-appearing in another Ingenium engine at a later date, or even in the aluminum bodywork of a Jaguar XJ or Range Rover.

The cylinder head line will eventually produce two different derivatives: one for diesel engines and one for the petrol units. Here, there are 46 machines, 32 of them MAG CNC cells, and 12 employees. The heads make a shorter journey between the various operations – 375 metres – and emerge weighing just 15kg. “We don’t have to machine everything in one operation,” says Hume. “There are four main machine operations, then assembly and final wash at a pressure of 300 bar.”

The crankshaft line has 46 machines, including lathes and milling and grinding machines from Niles Simmons. One of these alone shaves 2kg off the original weight of the un-machined part. The Landis grinding machines work on the same principle as a Maglev railway, using liner magnetic motors and hydrostatic slideways to reduce friction, allowing higher rotational grinding speeds and improving precision.

The importance of JLR's new facility

The Engine Manufacturing Centre (EMC) is critical to Jaguar Land Rover’s (JLR) efforts to become more sustainable, from both an environmental and business standpoint. On the one count, its 21,000 photovoltaic roof cells can supply 30% of the plant’s energy needs, reducing CO2 output by 2,400 tonnes per year, plus it harvests rainwater for re-use and has a wildlife corridor to protect local species.

On the other, at full capacity it could supply JLR manufacturing plants with 500,000 engines a year – half of what they will need if the medium-term aim of 1m cars per annum is to be achieved.

“This is the first time we have produced our own engines in a generation,” says operations director Trevor Leeks. “Ingenium will go into a wide range of vehicles, and we will also produce it in China in a smaller-scale version of Wolverhampton, purely for the Chinese market. In future I am sure we will be involved in some way as part of the group’s alternative powertrain strategy. We are flexible enough to do that.” 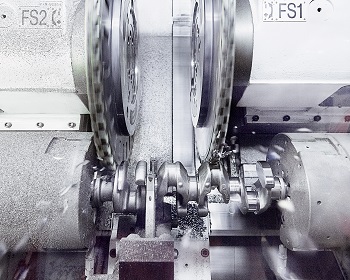 The final grinding is performed by a wheel with a manmade diamond outer surface which travels at 90 metres per second. The outer surface is good for grinding 80,000 parts, but needs to be re-dressed after every 80 operations. Before final grinding, a hard skin is put on the bearing surfaces of the cranks using an induction heating process to improve wear resistance. “We have bought the best machines in the industry,” says Hume. “On the crankshaft line, we work to tolerances of three microns. A human hair is 50 microns.”

Each block, head and crankshaft spends about four hours in the machining hall, which at full capacity will be turning out components for a new engine every 38 seconds.

Engine assembly involves 200 operations spread across 16 in-line zones, plus a 17th subassembly area where cylinder heads are put together before being fed back into the main production system. There is a small parts store to cover any glitches in the supply chain from bad weather or traffic, but the emphasis is on JIT delivery as part of the plant’s “lean and efficient” policy. There are 71 suppliers, 30% of which are UK-based.

Here, too, there are state-of-the-art machines, especially the J W Froehlich cold-test centres (no ignition), where the engine is run at 500rpm for 15 seconds, then 3,000rpm for 36 seconds before a final slow run. Over 60 parameters are logged for each engine and stored in the quality data base, which uses algorithms to examine trends. The engineers use this data to make improvements to the test cycles and the engines. At the end of the line, a hot test is performed for between one and 300 hours, with some engines taken to breaking point to check for durability.