Aluminium is steadily gaining a larger share of the total material usage in automobile construction, but it can be challenging, especially in high volume production, writes Ruari McCallion

According to a 2012 report from research group Ducker Worldwide, aluminium now averages 140kg per vehicle manufactured in the EU.

In terms of its use in particular segments, the metal is found across the board, from A-segment models such as Fiat’s Panda and 500, to E-segment offerings from Jaguar (XF, XJ), Range Rover, Audi (A6, A7, A8, Q7), BMW (5 Series and 7 Series), Porsche (Cayenne) and Mercedes (E Class, S Class).

The total increase in aluminium by weight in the EU from 2006-2012 is estimated by Ducker as 19.2kg – almost 20%. Growth in the USA over the same period is estimated at 13kg, just half of the growth measured over the previous six years. Its estimate for 2012 was for average weight per vehicle in North America to be 156kg – a 5% increase from 2009. Growth of 16% is expected in aluminium’s share of the material mix in North America between 2008 (the Environmental Protection Agency (EPA) base year) and 2025. This increase will be driven by the USA’s fuel economy goal of 54.5mpg by 2025. While advances in engine technology have a contribution to make, vehicle weight reduction is crucial and aluminium has been shown to be more effective in this than, for example, advanced high strength steels (AHSS). The role of engineering plastics has been growing but seems to have stalled – or at least paused – since 2010 and more exotic materials, such as carbon fibre, have infrastructure and manufacturing issues that preclude their widespread use in volume production.

In terms of applications, growth in European manufactured cars has been led by wheels, including spares (6.7kg increase), closely followed by chassis, suspension and steering usage (5.6kg). Engines and mounts is the only other area to have seen an increase in use of over a kilogram (2.2kg). Transmission and driveline, transfer beams and crash boxes, heat exchangers, and body and impact protection (IP) beams have all seen aluminium content rise by 0.7-0.9kg. Taken together, but excluding wheels, no less than 40% of the aluminium part growth in Ducker’s European sample has been in structural components.

Altair Engineering however, which provides product design services to automotive clients across the world, does not see this as a Europe versus North America issue. “We see more extensive use of aluminium in the premium vehicle categories,” says David Mason, the firm’s vice-president of global automotive. Europe has a higher concentration of premium manufacturers, as already listed above. “Audi has been using aluminium with its spaceframe for many years; JLR used aluminium extensively with its XJ sedan.

In the USA, the Plymouth Prowler makes extensive use of the material and the Chevrolet Corvette has an aluminium frame. It tends to be found in niche, premium vehicles in the US line-up,” surmises Mason.

Aluminium is much lighter than steel for the same volume; it is one of the most common elements on Earth; and it is naturally resistant to corrosion, all of which gives it great appeal to automobile manufacturers. There are challenges with using it, including packaging issues, availability of even lighter materials, such as engineering plastics, and – crucially – joining. The existing auto infrastructure can also be prohibitive to its use. However, aluminium is already well established in some applications and has been for years.

The engine in the Ford Cortina 1600E in the 1960s featured an aluminium cylinder head; the Hillman Imp of the same decade went further and had an aluminium engine block, admittedly not without its problems.

Alloys of aluminium are now found in every vehicle application in metal: cylinder blocks and heads; suspension control arms and lateral links; chassis subframes and cross members; body structures, bumper beams, doors, hoods and bonnets, wings, liftgates, tailgates and instrument panel structures. Heat transfer seems to be well well on the way to being totally made of aluminium; Ducker said EAA members were particularly interested in benchmarking these systems, from radiators and cores to heat shields.

The particular type of aluminium to be deployed will be dependent on the characteristics required. The main alloys used in automotive applications are from the 5000, 6000 and 7000 series, with some from the 2000 range and A365.0 castings in wheels. The 1000 series is essentially pure aluminium; while it can be work-hardened, it is not widely used in the auto industry. The 2000 series, which is alloyed with copper, has been widely used in aerospace but is one material that has not found its way across to cars, with the exception of some hood/bonnet applications. These alloys have been found to be subject to stress corrosion cracking.

5000 series products are alloyed with magnesium and, while they cannot be hardened to the strengths of 2000 or 7000, 5083 and 5754 are used for inner body panels, with some frames made of 5182 and/or 5754 formed sheets. The 6000 series are gaining ground; alloyed with magnesium and silicon, they are easy to machine and can be precipitation hardened. The latest 6000 alloys are extending their use beyond external body panels, which have been made of 6111 and 6016. 6061 and 6063 extrusions can be found in frames.

Nominally replacing one material with another is not as easy as simply saying “let’s make that out of aluminium it will save weight” – that is just where the challenges begin. A CAE feasibility for Toyota’s Venzo, undertaken by the Aluminium Association, looked at replacing steel with aluminium in various applications across the vehicle, with the intention of achieving a 30% weigh Use of castings was minimised for reason cost and complexity and there was no CAD created or detailed manufacturing undertak Grades used were: 6022T6 sheet; 57540 sheet; 6082T6 extrusion; as well as generic castings. 5754 O was deployed in the bodywork and front and rear shock towers. 6082T6 was used on front and rear beams, in the central tunnel, seat cross-members and other parts of the structural ladder in the floor pan. 6022T6 was used in the A- and Bpillars and the passenger safety cage. 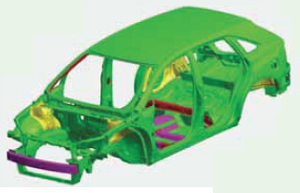 Generic castings were specified for the front and rear shock towers. Joining was by self-piercing rivets and epoxy adhesive, which was expected to help to increase stiffness by 10-15%, reduce loads on the rivets and improve crashworthiness.

Extrusion gauges ranged from 1.4-4mm; castings from 3.5-10mm; and stamped parts from 0.9-3.0mm. The study compared optimised steel mass with aluminium replacement; the former saved 13.4% but the latter easily exceeded it, delivering a weight saving of 39.1%, and with improvements in stiffness, crashworthiness and NVH in excess of base targets.

“We use 6000 series for skin panels and in applications where we want stiffness and strength, such as A- and B-pillars,” says Mark White, chief engineer, body complete business unit with JLR. “We use 5000 alloys for deep parts; 5754 is used in floorpans, for example. A special grade, called NG5754 (NG stands for ‘next generation’), which has been developed with Novelis, has some improved properties; it can be deeper-drawn and formed into complex parts. We use 5182 for bonnet and door inners and for the Range Rover tailgate due to its formability.”

In North America, aluminium is now the dominant material for power train, heat exchangers and road wheels, and is becoming progressively more popular in bonnet and boot lids, bumpers, steering knuckles and suspension arms. Almost one car in three now has a bonnet made of aluminium. Ducker says that, assuming continuation of present trends, North American-built vehicles will on average be 185kg lighter in 2025 than they were in 2008.

Achieving the target level of weight reduction will take some doing. At present, aluminium accounts for 156kg of ‘light vehicle’ material in cars built in North America. It is gaining ground and is expected to double its share of the material mix by 2025, but even that will only be to 16% of the total. Compared with where JLR, Audi and BMW are already positioned, there is a long way to go.

Altair’s David Mason, who has worked with JLR and other companies, says when it comes to discussions about lightweight material substitution (LMS) versus lightweight material removal (LMR) – essentially, using the existing material and making the most of it – manufacturers should aim to take full advantage of their existing materials through design optimisation and simulation. “We can get 10-20% weight out with the existing aluminium material,” he says. “It is only for even higher savings that material substitution needs to be considered. It is ultimately up to each auto manufacturer to decide how much they want to invest for the weight they want to save. Material is important but optimisation of design is vital.”