Thailand to be rivalled by Indonesia as auto hub 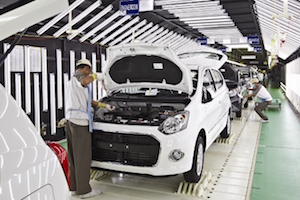 Indonesia – The production gap between the two countries was around 810,000 units in 2015 but is set to narrow to 465,000 by 2020, according to the ‘Indonesia Outlook 2020’ report by Ipsos Business Consulting. This change will have implications for vehicle-makers, suppliers and policy planners, says the organisation.

“The evidence is clear that in terms of the trend in vehicle production output, policy development, and improvements in infrastructure, the Republic [of Indonesia] continues towards increasing capacity, domestic consumption and export volumes,” said Markus Scherer, global automotive sector leader at Ipsos.Indonesia produced around 1.1m units last year in comparison with Thailand’s 2m, Ipsos reported, noting that the former has been less successful at building export markets – shipping out 23% of its production in 2015 versus a figure of 55% for its rival.

Ipsos said the output gap could be closed by raising plant utilisation, which was about 62% in Indonesia last year, or by investing up to $2.6 billion in new and expanded capacity if utilisation stays at the same rate. The consultancy said that, regardless of relatively low exports at present, “Indonesia has huge domestic growth potential, ensuring that investors can reliably expect a solid baseline in sales growth if they are appropriately positioned in the market”.

However, the Ipsos report noted some difficulties for Indonesia, including its ranking of 109 out of 198 countries in the World Bank ‘ease-of-doing-business’ index, compared with 49 for Thailand, although Scherer said recent improvements have included the relaxation of foreign ownership rules and the streamlining of licensing applications.

Chukiat Wongtaveerat, senior consulting manager at Ipsos Bangkok, also pointed out that OEMs such as Ford and General Motors have announced exit plans for Indonesia, while others like Volkswagen, Hyundai and Mazda have not yet communicated clear strategies for securing a strong market share.

“Specifically in relation to Indonesia, it is going to require stable regulation and continuous development of the automotive supporting infrastructure against the backdrop of current sales,” commented Wongtaveerat. “Once this happens, we are likely to see a ‘domino effect’, with other absent OEMs looking to build a plant and engage in an aggressive expansion of their dealer networks.”

Douglas Cassidy, Indonesia country head at Ipsos added: “A production base in Indonesia will enable them to benefit from the cost, scale and supply-chain advantages of the country that seems on track to become the pre-eminent automotive power in ASEAN [Association of Southeast Asian Nations].”