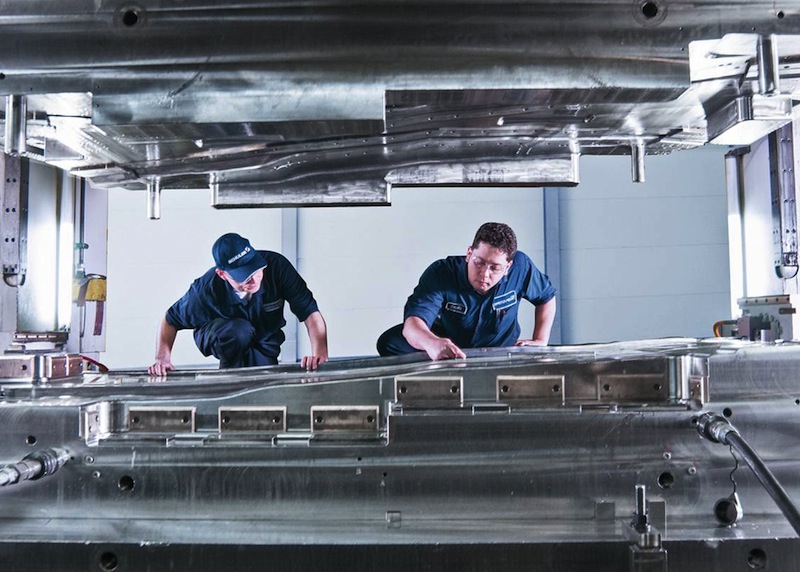 The fact that Vari-Form has been selected by Fiat Chrysler Automobiles (FCA) US as its 2015 Supply Chain Management Supplier of the Year speaks volumes for the advance of hydroformed parts. Recent projects at FCA include an upper cross-member for the 2015 Jeep Cherokee, which employed Vari-Form’s proprietary pressure-sequence hydroforming technology. The resulting structure is very lightweight, contributing to a 45% increase in fuel efficiency for the Cherokee over previous vehicles. The award system evaluates supplier performance in areas such as quality and cost; Vari-Form won out of nearly 3,600 suppliers which were assessed.

“The Cherokee cross-member is part of a highly engineered front-end module that possesses a complex architectural form and provides a considerable weight-reduction solution for the customer,” says Vari-Form’s director of sales and engineering, Doug Viohl. The intricate contours within the cross-member facilitate the integration of other front-end module components, including the bonnet seal, latching, wiring harnesses, headlights and mounts for the cooling system. Vari-Form says its tube hydroforming process is uniquely capable of providing these formations. The hydroformed upper cross-members are integrated into a front-end module at Bayloff Stamped Products of Kinsman, Ohio.

“Our patented pressure-sequence hydroforming produces the thinnest hydroformed tubular parts,” points out Viohl, who explains that the Cherokee cross-member is produced from 0.8mm-thick sheet steel, thus helping to meet the lightweight requirements of FCA. “Our technology stretches the limits of thin-wall hydroforming, staying within finite tube thickness limits."

Clearly, vehicle manufacturers are introducing lighter, stronger materials to hit emissions reduction and fuel-economy goals, as well as to reduce manufacturing costs and vehicle weight – all while satisfying demanding safety requirements. One approach to meeting these competing interests is to shape high-strength blanks into strong, lightweight hydroformed parts.

Hydroformed parts from Schuler, which has experience in single-step, high-pressure and pressure-sequencing processes
So, what attributes of pressure-sequence hydroforming make it a more efficient and productive alternative to stamping closed-section assemblies? Firstly, in-the-hole punching eliminates post-production operations, saving time and cost, and helping to ensure final part quality. Secondly, formability is increased by applying hydraulic pressure in stages, while corner radius areas are formed by exceeding the yield limit of the tube material in a bending mode, not in a tensile mode.

In pressure-sequence hydroforming, tube formation is controlled as the die is closing, so the tendency for the tube to pinch at the die split line is virtually eliminated. The process is suitable for producing complex parts from tubes measuring 25-150mm in diameter. Materials which can be accommodated include aluminium alloys and high-strength steels.

Among recent developments in this innovative technology arena is a four-column hydroforming press from Graebener-Reika. Available through the company’s parent, Graebener Maschinentechnik, the system is pitched specifically at high-volume environments. Against the previous-generation press, the latest version doubles the number of parts produced in a single press stroke while cutting the per-stroke cycle time in half.

The Graebener presses are available in closing forces from 800 to 5,000 tons, with the press crown and bed connected to each other and clamped by means of four tie rods (the crown of the press is supported by the side columns). This column design offers the advantage of easy accessibility to the press and die space area from all four sides.

Another four-column hydroforming press to be introduced recently comes from Interlaken Technology. Offered in clamping forces from 250 to 5,000 tons, the machine’s multi-channel, closed-loop control system can be programmed to handle various sizes and materials. Furthermore, it offers dynamic mode switching that enables the user to change between a variety of feedbacks such as force, position and internal pressure.

Reducing weight, boosting stiffness
Vari-Form also partners with GM on hydroforming projects, including aluminum-frame rail components for the latest Chevrolet Corvette Stingray, which are delivered to the OEM’s Bowling Green assembly plant in Kentucky. The rails, optimised for weight and strength, have helped GM engineers to achieve a significant reduction in gross vehicle weight over previous models, while at the same time boosting stiffness. Weight has dropped by 45kg in comparison with the steel rails used in the C6 Corvette, while stiffness has increased by 57%. The car’s frame has left and right hydroformed, aluminium-tube centre sections fitted with pairs of connecting nodes and front/rear crush zones.

Intent on expanding its horizons beyond the US, Vari-Form has recently announced several international joint-venture partnerships. The company is working with EMARC of Piemonte, Italy, while a strategic agreement with Deussen Acquicon of Germany is also introducing hydroforming to European manufacturers. In Asia, a partnership with UltraParts is providing manufacturers in China with technical support and door-to-door supply.

Looking to the future, the Hydroform-Intensive Body Structures (HIBS) initiative is redefining the way automotive manufacturers and tier suppliers view vehicles. According to company president Stephen Dow, Vari-Form has just completed its third phase of HIBS, which will debut simultaneously in the US and Europe later in 2015.

Special forming requirements
Ford is another OEM that has been exploiting the benefits of hydroforming. For instance, to deliver top performance with the most efficient headroom package and weight, Ford worked with Schuler and Midway to engineer a heavy-gauge steel, hydroformed A-pillar and roof rails for the 2015 Mustang. Through this collaboration, torsional stiffness has been increased by 28% for the new car, while the body-in-white is lighter than the previous model.

According to Schuler, each component is unique in terms of the forming requirements of the material, the hydroforming process and parameters. The best approach is to deploy finite element analysis (FEA) for feasibility and identify potential areas of concern, such as wrinkles, thinning or splitting. Schuler has experience in single-step, high-pressure and pressure-sequencing hydroforming. The company says traditional high-pressure hydroforming is best matched to applications where there is a high degree of expansion, such as exhaust components, Y pipes and T pieces. In contrast, pressure-sequence hydroforming has the advantage for high-strength and ultra-high-strength steels with low elongation values, as forming takes place without expansion and at lower pressure – which delivers a more uniform wall thickness.

“Interest in hydroforming in China is growing, and we are receiving an increasing number of inquiries from manufacturers of vehicles and vehicle parts”
– Peter Robisch, AP&T 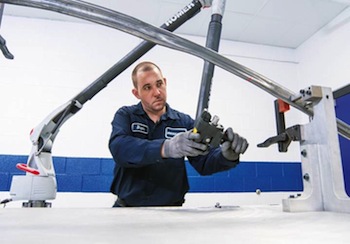 Schuler and Midway helped Ford to engineer heaviest-gauge steel, hydroformed A-pillar and roof rails for the 2015 Mustang
Upgradable tooling
To help ensure project success when looking to create hydroformed parts, all development should be integrated to ensure design and production efficiency. Component-relevant criteria such as necessary strength, optimum material, required tolerances and surface composition are the starting point for component development. Based on this, feasibility can be analysed by FEA simulation.

From here, an initial production concept is devised in parallel with component development. The process steps identified in the simulation are used for building ‘upgradeable’ prototype tooling, which can also be a significant cost saving. Once this design process is complete, the most important parameters will have been defined, such as the precise geometry, material and process sequence from the starting material to the finished component.

Unfortunately, there is an assumption in the industry that hydroforming dies are too expensive. This is true if the OEM follows the path of separate designs for separate regions, using different suppliers. It is also true if the OEM waits until it is ready to order prototype tooling to consider the impact of part design on tooling design and the production process. However, Schuler says there are savings that can make the technology economically attractive. For instance, capital investment can be lowered by reducing the number of dies required to move from R&D to full production. By using upgradeable dies, an entire die can be eliminated from the traditional development process (typically three dies: R&D, prototyping and production). To do this, the prototype tool is built in such a way that it can be upgraded to a production tool.

As an example of capital investment for a global platform, consider a vehicle with six hydroformed dies. Through the use of an upgradeable development die into a production die, there is an overall average cost saving of $300,000 per die as compared with the traditional three-die development route. As a result, the ultimate savings for the programme would be $1.8m. This can be even more significant when considering repeat development on a global vehicle programme with multiple tier-one suppliers.

Although hydroforming has been used in the automotive sector since the early 1990s, the industry’s interest in this advanced process only began to spike upwards again around 2002 after a decade of relatively unchanged demand. The escalating cost of fuel was identified as one of the underlying reasons (and therefore the need to reduce vehicle weight). However, hydroforming also offers a great deal of freedom in terms of manufacturing complex parts with exact surface forms and small tolerances, such as exhaust systems. 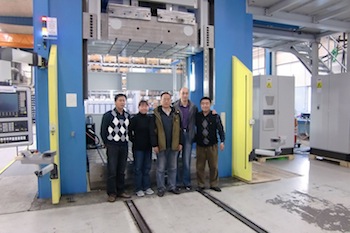 Swedish company AP and T is seeing increased demand for hydroforming equipment in China
AP&T is among the technology suppliers getting ready for the future by continuing to strengthen its role as a knowledge partner and developer of hydroforming equipment, including presses, automation and tooling. Furthermore, at its development and testing facilities in Lagan, Sweden, the company has been devising new simulation methods for making advanced hydroformed products.

According to AP&T, one market expressing great interest is China. Only last year, the company supplied hydroforming equipment to Volkswagen FAW Platform in Changchun, China. It was AP&T’s third transaction in a short period of time in Changchun, and the second with VW-FAW. The latest hydroforming press, which offers 3,940 tons of press force, is being used to manufacture suspension parts.

“Interest in hydroforming in China is growing, and we are receiving an increasing number of inquiries from manufacturers of vehicles and vehicle parts,” confirms Peter Robisch, product manager for hydroforming at AP&T. In fact, the company can boast reference sites not just in China, but worldwide, for example at Akrapovic Exhaust System Technology in Slovenia, Daimler/Mercedes-Benz Cars in Germany and Hyundia Hysco in Korea.

Of course, knowing the right way to hydroform a detail takes much more than just buying the right press. For instance, it will typically be necessary to adapt the tool to the press and optimise the forming sequence. In addition, automation in terms of loading/unloading or tool changing might be required. In short, finding a technology partner able to offer core competence in the entire production process is likely to pay the highest dividends.