In the competitive automotive arena, there is no margin for error when it comes to large part machining 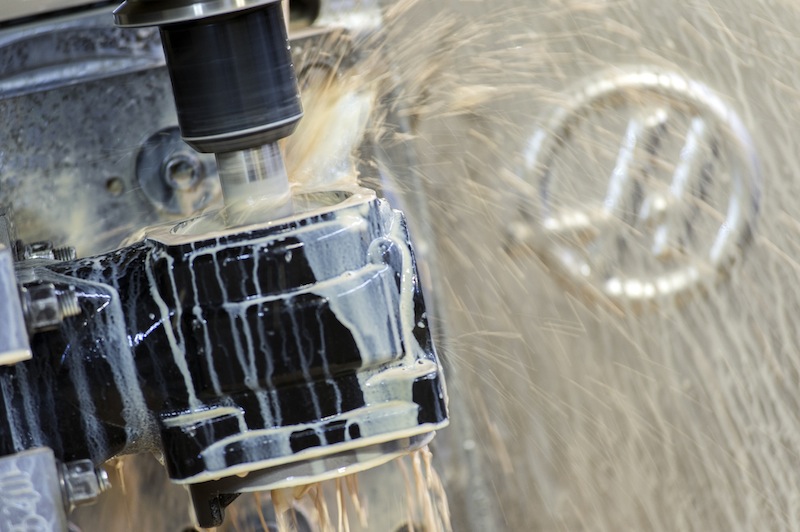 Small, high-volume parts for automotive applications will typically run on the same machine, using the same programme, for as long as required. If a modification or a new, similar part is needed, the production engineering input is often minimal. But for large parts the process is more complicated; the machine tool is typically bigger and more expensive, the toolpaths are more complex and the cycle times more critical. And yet the margin for error is less. With the high cost of raw materials and casting processes, few companies can afford to fill their scrap bins with large automotive parts.

Over in China, Shanghai Chief Automobile Parts is only three years old but already making unbranded, diesel-powered air compressors and replacement parts for well-known marques of trucks and commercial vehicles (CVs). At the outset of the business, chairman Yang make initial contact with international customers by attending big trade fairs in the US and Germany, often agreeing to make sample parts at his own expense. A 30% down payment from his first customer helped him to get the cash flow he needed for investment in equipment.

In safe hands with Haas
Yang’s search for machine tools led him to Haas. “Machine tools made by Haas are very good value, but there were many additional factors that made them attractive,” he says. “One of the most significant was that the CNC seemed easy to use. I knew that once my operators had used Haas, they wouldn’t want to use other makes. The control has a lot more functionality and flexibility than other machines of similar value.”

With orders starting to roll in for diesel-powered air compressors, Yang needed to machine components such as crankshafts, pistons, rods, cylinder heads, crankcases and motor components. Since truck air compressor parts are made from cast iron, the workpieces are heavy and cutting strength is a priority. To get the strength he needed, Yang opted for a Haas VF-3YT vertical machining centre with 50-taper spindle, for heavy-duty cutting.

The VF-3YT also offers extended travels of 1016 x 660 x 635mm, which allows Yang to mount three crankcase castings on the same table. Machining time is around 30 minutes. “Our most challenging parts are definitely the crankcases because the tolerances are very tight, typically 2-3µm,” he states. “However, the VF-3YT copes very well with both the precision and heavy workload – if it didn’t, we wouldn’t have bought more Haas machines.”

The VF-3YT soon became the most frequently used machine tool at the company and so, in early 2014, Yang bought a Haas VF-3 vertical machining centre, this time including a Haas CNC rotary table with 310mm platter. The VF-3’s heavy-duty tasks include producing a trio of bores and performing various facing operations on crankcase castings. Cycle times are typically 15 minutes, while batch sizes are 300-500.

“We exploit fully the capability of our Haas machines,” says Yang. “As well as running 24/7, we load the tables with far higher loads than are recommended and we’ve never had an issue.”

Yang takes pride in making his own product, and doing it well. “It’s not about being the biggest company; it’s about producing the best product,” he says. “That’s what makes a company successful, wherever it is in the world.”

Machining chassis castings at JVM
This sentiment would surely by echoed by JVM Castings, the UK’s largest independent aluminium die-casting shop. JVM machines nine different JLR chassis castings at its Worcester headquarters and a further nine at its Tamworth facility, destined for production lines building all variants of the Range Rover and Range Rover Sport. 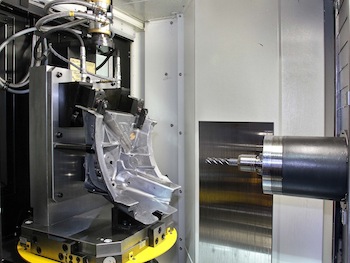 JVM partners with Whitehouse Machine Tools, the UK agent for Brother machining centres, to react quickly to changes in volume. When 2,000 of each type of large casting per week was predicted, the company planned to mill, drill and tap them on Brother machining centres that were supplied in 2010 to fulfill another contract. After weekly quantities rose to 3,000 it was decided to install four new Brother machines (TC-S2DN-O models) to form a separate cell.

Now that volumes for JLR are expected to expand further, JVM has added three of the pre-existing Brother TC-S2DN machining centres to form a line of seven machines processing eight of the nine casting types, working 24 hours a day, five days a week. The total weekly production output of machined components from the Brother manufacturing line is now close to 30,000.

High axis feed rates are essential to enable the cutter to get around the large castings quickly, as are rapid tool changes to minimise idle time. Moving elements on the Brothers are light so that there is low inertia, resulting in fast acceleration to 50m/min rapid traverse speed in all axes. It takes 1.6 seconds from chip to chip, due to fast, servo-driven tool change from the 21-station ATC being completed without having to stop the Z-axis feed. The Brother TC-S2DN-O is also quick in cut due to the 16,000 rpm spindle and feeds up to 20m/min.

“We have other 30-taper vertical machining centres on site from various suppliers, but the Brother machines are fast and reliable, which is part of the reason we continued to use them for the capacity expansion,” says commercial director Steve Hoole. “The earlier models we installed exceeded their guaranteed production rate.”

Cutting to the chase
The turnkey installations delivered by Whitehouse Machine Tools, complete with tooling packages, allowed JVM to run the new machines 24/5 within a week of them arriving on the shop floor. Whitehouse configured the Brothers with automatic hydraulic fixtures to avoid manual clamping and air sensing to verify that components are loaded before the cycle can start.

"All of the speed in the world is irrelevant if you’re not holding tolerances”
– Mel Koslowski, Roush Industries

The X-axis on the O-type Brother TC-S2DN is extra-large at 700mm and Whitehouse made sure that the trunnion-and-tailstock fourth-axis rotary indexing units allowed the full table travel. To enable some of the larger castings to swing horizontally on the trunnion, column risers were fitted to the machining centres at the factory in Japan to increase the distance from the spindle nose to the table surface.

Also installed at Worcester at the same time as the Brother machines was one of the country's first Akari horizontal machining centres. This was a five-axis HS-450i with twin pallet changer from Avarex, again represented in the UK by Whitehouse Machine Tools.

JVM needed extra capacity to machine a large aluminium shock tower casting, designed to link the Jaguar chassis with its suspension, and transferred production from other HMCs on site to the Akari as component numbers grew. The machine has been fitted with a Nikken two-axis table to provide five-axis capability, operation being by closed-loop control from the Fanuc 31i NANO CNC. Hydraulic fixtures for automatic clamping have been supplied to maximise productivity, as the requirement for 350 left and right-hand pairs per week is rising quickly to 550.

"As ever in our industry, these parts are price sensitive,” says Hoole. “A five-axis machine was ideal for minimising the number of operations and hence the unit manufacturing cost, but such machines tend to be expensive, raising overheads and lowering the profit margin. The Akari was less than 75% of the price of the other five-axis HMC we considered, which really made the project viable."

Roush up to speed with large parts
Supply chain machine shops in the US are also having to find innovative ways of competing on the global stage when it comes to large part machining. Take Roush Industries of Livonia, Michigan, for example. Roush processes orders from the automotive and motorsport markets using machine tools that include four Makino a81 horizontal machining centres, three of which are integrated within the company’s Makino Machining Complex (MMC) automated material handling system. 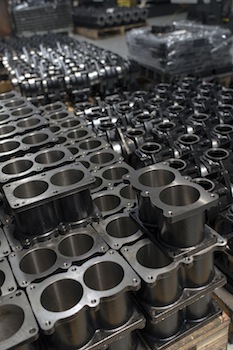 “While other shops might push a machine to its absolute limit every once in a while or witness something really complex at a demo day, we are doing that on our Makino equipment every single day,” says operation manager Mel Koslowski. “I joined in 2009 from a shop where we’d set up a machine and run it for thousands of pieces for days. Here at Roush, it’s all about batch runs to suit different customer demands.” A machine at Roush might be gun-drilling 316 stainless steel in one instance, then switch to boring a compacted graphite iron (CGI) engine block within a matter of minutes.

Troy Carney, programme manager at Roush Industries, attributes much of this flexibility to the cell’s sizable pallet stock and the large-capacity tool magazines found on each machine. “Tool selection is critical to part diversity,” he says. “We recently upgraded our last 99-tool capacity magazine to 137 tools, which has allowed us to keep the cell running unattended longer while taking on a wider array of part orders.”

Koslowski emphasises the importance of this capability, by adding: “Customers are under the same pressures of short lead-times. And if these schedules aren’t met, it can jeopardise the overall timeline of a large-scale project and ultimately lead to a negative impact on their bottom line. Our aim is to provide the people and technologies to make sure that doesn’t happen.”

Adding flexibilty to workflows
Adjacent to the MMC cell is the company’s fourth Makino a81. This standalone machine operates in conjunction with the cell, adding more flexibility to the workflow in situations where orders could disrupt optimal product flow. In fact, the company has now added a second standalone a81 to increase production capacity even further.

While the high-torque output, spindle speed, traverse and cutting feed rates contribute significantly to reduced cycle times, Koslowski believes there’s a more significant benefit that’s somewhat hidden and overlooked by many people when selecting a machine tool. “The low chip-to-chip time for tool changes is a significant advantage on the a81s,” he says. “There are different ways that this metric is presented in the industry, but if you truly compare apples with apples, it’s an incredible difference that has huge benefits when you’re running jobs that require a lot of tools, which is something that we do day-in, day-out.

“However, all of the speed in the world is irrelevant if you’re not holding tolerances,” adds Koslowski. “We know we can use every bit of the ability on these machines and still hold 0.01mm tolerances.”

The company is currently looking to rearrange its layout and further expand its automated capabilities. As a result, Koslowski and Carney are evaluating a number of different workflow arrangements, including cell integration of the company’s current standalone machines and the purchase of a sixth a81.

Additionally, the company is considering investments in five-axis machining capabilities. During a recent open house, Koslowski witnessed demonstrations of a Makino D500 five-axis machine and a PS95 vertical machining centre. He immediately recognised the impact that these could have working together with the a81 cell. “Ideally, I’d love to integrate five-axis capabilities into the cell while complementing it with standalone machines. Both of these machines fit the bill,” concludes Koslowski. 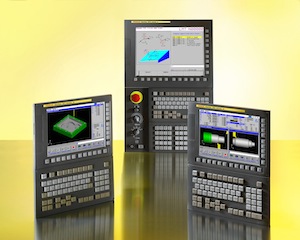 In addition, large parts typically mean a large machine, which presents its own challenges in maintaining accuracy over the total working envelope. For instance, to complement machine precision and mechanical adjustments, Fanuc also provides a suite of compensation technologies to optimise machine accuracy. Standard and advanced versions of backlash and pitch error compensation are the typical starting point, with inclination, straightness and thermal growth compensation available for larger or specialist machines.